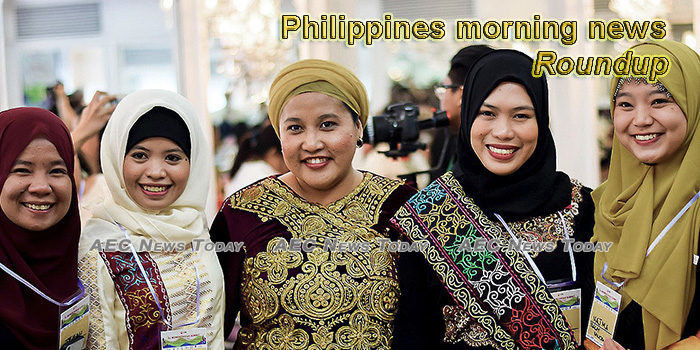 DOH: Filipinos to be repatriated from Macau to just undergo home quarantine as persons under monitoring
The Philippine government is now readying the process for the repatriation of some 200 Filipinos from Macau who will be considered persons under monitoring (PUMs) once they arrive in the country, according to the Department of Health.
— Eagle News

‘We are losing fight’ vs dirty money, Gordon tells AMLC
Senator Richard Gordon on Thursday, March 5, expressed concern that the Philippines was losing its fight against dirty money because of the Anti-Money Laundering Council’s (AMLC’s) lack of enthusiasm to investigate suspicious funds entering the country.
— Rappler

Inflation slows to 2.6% in Feb
HEADLINE inflation decelerated to a two-month low of 2.6 percent in February, the Philippines Statistics Authority (PSA) announced on Thursday.
— Manila Times

500 Pinoys stranded in California over virus fears
At least 500 Filipino crew members were among the thousands stranded on a cruise ship off the California coast over fears of the new coronavirus after passengers and crew members on board developed symptoms.
— Manilastandard.net

NegOr dengue cases drop 24%
The Department of Health (DOH) in Negros Oriental has reported that dengue cases in the province in the first two months of 2020 dropped by 24 percent compared to the same period last year.
— Philippine News Agency

Government to triple free WiFi sites
The Department of Information and Communications Technology (DICT) is set to triple the number of its free WiFi hotspots this year in a bid to bolster its goal of bringing connectivity to more people across the country.
— The Philippine Star

PHL exports seen least hit by virus in Asean–Unctad
THE Philippines could lose as much as $300 million worth of exports, mostly in communication equipment, due to the coronavirus outbreak, but it is the least to take damage from the crisis among Southeast Asian nations, according to a United Nations report.
— Business Mirror

PSA survey: 2.39 million Filipinos jobless in January
FIVE out of 100 Filipinos who are part of the country’s labor force are jobless, according to the results of the January round of the Labor Force Survey (LFS) released by the Philippine Statistics Authority (PSA) on Thursday.
— Business Mirror

Philippines banks least affected by COVID-19 outbreak — Fitch
Philippine banks are sufficiently capitalized and are less likely to be affected by the impact of the coronavirus disease 2019 (COVID-19) global outbreak, according to Fitch Ratings.
— The Philippine Star

Manila Police Chief Apologizes for Directive to Collect Data on Muslim Students
Islamic leaders in the predominantly Catholic Philippines welcomed the Manila police chief’s apology on Wednesday for a plan to collect the names of Muslim high school and university students in the capital area that critics had branded as religious profiling.
— Benar News

Suspension of loan, grant deals over Iceland resolution an outrage reaction — Palace
President Rodrigo Duterte’s decision last year to shun loan and aid from countries that backed an inquiry on the human rights situation in the Philippines was just an expression of outrage, his spokesperson said Thursday.
— GMA Network

Palace wants China claim on isolated crimes validated
Malacañang on Thursday would not say whether the criminal incidents involving Chinese citizens in the country were isolated cases.
— GMA Network

No off-cycle rate cut, says Diokno
BANGKO SENTRAL ng Pilipinas (BSP) Governor Benjamin E. Diokno said they will not go for an off-cycle rate cut following the US Federal Reserve’s surprise move to ease as part of efforts to boost the economy amid risks of a slowdown due to the coronavirus disease 2019 (COVID-19) outbreak.
— BusinessWorld

House OK’s lower capital requirement for foreign retailers
A PRIORITY MEASURE that aims to further open up the retail sector to foreign companies was approved on second reading at the House of Representatives on Wednesday.
— BusinessWorld

New Taiwan coronavirus case had travel history to PH
The 44th confirmed novel coronavirus case in Taiwan had a history of travel to the Philippines, the Taiwan Center for Disease Control (CDC) said on Thursday night, March 5.
— Rappler

Passage of bill mandating underground cables urged following PNP chopper crash
A party-list representative on Thursday renewed her call for the immediate approval of the measure mandating the underground installation of wire and cable systems in the country.
— GMA Network

[ANALYSIS] How the budget deficit exploded under Duterte’s watch
I’m quite surprised not more people are alarmed by this.
— Rappler

No plan to use RDT kits for coronavirus – DoH
The Department of Health (DoH) said that it is not yet considering to use rapid diagnostic test (RDT) kits for the detection of coronavirus disease 2019 (COVID-19) until it has been proven effective by the World Health Organization (WHO).
— Tempo

DICT launches ceremonial activation of the Free Wi-Fi For All
The Department of Information and Communications Technology (DICT), in partnership with the United Nations Development Programme (UNDP) and local government units on Thursday launched in its office here in the city the simultaneous activation of the Free Wi-Fi For All – Free Public Internet Access Program sites with the provinces of Albay, Isabela, Palawan, Lanao del Sur, and Davao City.
— Philippine Information Agency

BIR seals machines in offsite cockfight betting sites in QC
Offsite cockpit betting machines of Manila Cockers Club, Inc. (MCCI) in 19 locations in Quezon City were sealed simultaneously Thursday to prevent them from being used since these are unregistered with the Bureau of the Internal Revenue (BIR).
— Philippine News Agency

Ifugao vet calls on hog traders, raisers to cooperate against ASF
Provincial Veterinarian James Gopeng has called on all hog traders, shippers, producers and barangay officials to cooperate and abide with the checkpoints and preventive measures against African Swine Fever (ASF) to contain its spread in the province.
— Philippine Information Agency

AFP probing presence of 3,000 PLA troopers
The Armed Forces of the Philippines is validating reports that thousands of Chinese soldiers are in the country to gather necessary intelligence information.
— Tempo

Covid-19 delays shipment of trash to SoKor
The coronavirus disease 2019 (Covid-19) outbreak in China and the spread of the virus in other countries have been factors in the delay of the shipment of the remaining 2,000 metric tons of trash back to South Korea, a Bureau of Customs (BOC) in official said on Wednesday.
— Philippine News Agency

DoTr sees no delay to subway from Japan coronavirus disruptions
THE Department of Transportation (DoTr) said Thursday it will proceed with the implementation of the first phase of the Metro Manila Subway Project, and expects no disruption to the timetable in the form of delayed deliveries from Japanese suppliers due to the coronavirus outbreak in Japan.
— BusinessWorld

Imported vehicle sales down by 16.2% in January
A total of 5,433 imported vehicles were sold in the country in the first month of the year, the Association of Vehicle Importers and Distributors (AVID) reported Thursday.
— Philippine News Agency

PNP: Chinese-related crimes in Philippines isolated for China but concerning for us
Crimes and illegal activities in the country involving Chinese may be considered “isolated” by the Chinese Embassy in Manila but not something that would be easily brushed off by law enforcers, according to Philippine National Police (PNP) chief of directorial staff Police Lieutenant General Guillermo Eleazar.
— GMA Network

Recruitment firms told to monitor health of OFWs in HK, Macao
The Philippine Overseas Employment (POEA) has directed all licensed recruitment agencies in the country to look after the health conditions of their deployed workers to China’s special administrative regions (SARs) Hong Kong and Macao, amid the threat of coronavirus disease 2019 (Covid-19).
— Philippine News Agency

Duterte firm on plan to build Marawi camp
President Duterte has pledged to pull out the military from Marawi City once the area is declared peaceful and safe from security threats.
— Tempo

Hot Air Balloon festival all set on March 6-8 amid virus scare
AMID the global coronavirus scare, the Philippine International Hot Air Balloon Fiesta, the most highly anticipated and longest-running sports aviation event in Asia, is still pushing through at the San Lazaro Leisure Park in Carmona, Cavite from March 6 to 8.
— Business Mirror

DBM chief: Only RDC-endorsed projects guaranteed of funding
Budget Secretary Wendel Avisado told heads of regional line agencies in Central Visayas that only projects, activities and programs (PAPS) that underwent vetting and given endorsement by the Regional Development Council (RDC-7) are guaranteed of funding from the national government.
— Philippine Information Agency

Parañaque village homeowners worry about firing range set up amid influx of hundreds of POGO workers
Some residents of Multinational Village in Parañaque City fear possible military activities inside their subdivision, where a firing range has been set up amid the growing number of Chinese nationals in the neighborhood.
— GMA Network

Palace unaware of Duterte’s selection of Ungab
Malacañang on Thursday said it has no knowledge of President Rodrigo Duterte’s supposed key role in the selection of Davao City Rep. Isidro Ungab as the chairperson of the House appropriations committee.
— Philippine News Agency

Grade 9 pupil in NoCot kills classmate-friend with a punch
Students of a public school in North Cotabato are mourning the untimely death of a student who was hit by a punch in the nape by his classmate-friend during a brief quarrel on Wednesday.
— Philippine News Agency

Robredo: ‘Empower one woman and she will raise others with her’
As the world celebrates Women’s Month, Vice President Leni Robredo reminded Filipinas that the best way for women to break through the glass ceiling today is to do so together.
— Rappler

NegOcc city unveils mobile app for ‘participative governance’
The City of Himamaylan in Negros Occidental launched on Thursday a mobile application that will serve as a platform for its citizens to raise issues and concerns, particularly on infrastructure development.
— Philippine News Agency

Greenhills hostage-taker s labor issues tackled by House panel next week
The House Committee on Labor and Employment is set to hold an inquiry into the labor-related concerns raised by Alchie Paray, a former security guard who staged a hostage at a mall in Greenhills, San Juan City earlier this week.
— GMA Network

Menu, prices: Bangkok’s Fire Tiger in Metro Manila
Metro Manila is definitely not short of milk tea places to visit, but that doesn’t stop foreign brands from setting up shop in the Philippines – just like Fire Tiger by Seoulcial Club, a bubble tea shop from Bangkok, Thailand.
— Rappler