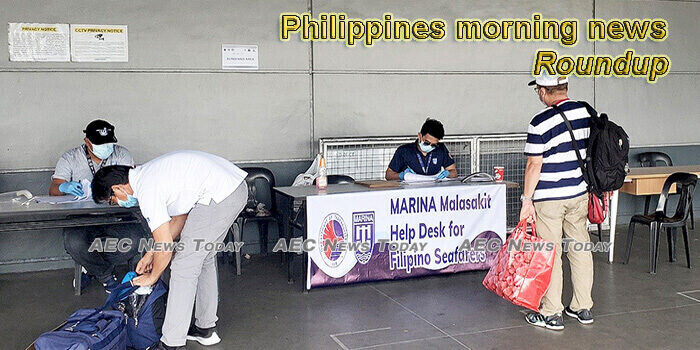 RRTS: Increasing inter-island trade in the Philippines through island hopping
The Philippines is an archipelago of over 7,000 islands. Internal connectivity is a major challenge, with domestic maritime trade costs high.
— AEC News Today

Diokno sees legal battle if anti-terror bill becomes a law
The constitutionality of the proposed Anti-Terrorism Act will be questioned in courts if ever it becomes law, according to human rights lawyer Chel Diokno on Monday.
— GMA Network

Duterte report: Up to 100,000 OFWs may be repatriated due to pandemic
The Palace is expecting that the number of repatriated migrant Filipinos due to the global impact of the COVID-19 pandemic would reach 100,000 in the coming months.
— Philippine Star

Roque defends lockdown, says 100,000 lives saved
Even if the number of COVID-19 cases is rising, the Philippines is actually doing better in its fight against the disease because the number of people testing positive for the causative virus is lower and the case doubling time is seven days, according to presidential spokesperson Harry Roque.
— Philippine Daily Inquirer

NCR wage board defers pay hike talk indefinitely on Covid crisis
MINIMUM-wage earners in Metro Manila may have to wait until after the Covid-19 crisis before they can get a pay hike.
— Business Mirror

Provincial bus firms’ job losses top 14,000; 10,000 more seen
ABOUT 14,000 workers of provincial bus firms have lost their jobs due to operational restrictions, according to bus operators, warning that another 10,000 may be let go because of the implementation of cashless fare systems.
— BusinessWorld Online

Wirecard says missing $2.1B likely does not exist; withdraws results
Wirecard AG on Monday said there was a likelihood that the 1.9 billion euros ($2.13 billion) reported missing from its accounts simply did not exist in the first place.
— BusinessWorld Online

PhilHealth pushing to postpone Universal Healthcare due to funding woes
State insurer Philippine Health Insurance Corporation (PhilHealth) is pushing for the postponement of the implementation of the Universal Health Care Law, due to poor collection caused by the COVID-19 quarantines.
— Coconuts Philippines

Law enforcers capacity, resources vs. terror lacking, not Human Security Act –Chel Diokno
The government should look for ways to strengthen the capacity and resources of law enforcers against terrorism instead of passing the controversial anti-terror bill, according to human rights lawyer Chel Diokno on Monday.
— GMA Network

PANDEMIC IN CHARTS: Hundreds arrested daily, filing delays leave thousands in jail
Philippine police have been arresting hundreds daily since the start of the pandemic lockdown on March 15, but 3 months have passed and the system has not yet cleared its backlog, leaving more than 2,000 Filipinos still in jail.
— Rappler

Palace: Government to study letting more foreign workers in for flagship projects
The government will look into proposals to allow foreigners working in state flagship projects to come to the country.
— Philippine Star

As lockdown eases, Manila’s dirty air is back. It doesn’t have to stay
Air quality in Metro Manila is returning to its usual noxious levels as Covid-19 lockdown measures are loosened up.
— Eco-Business

Duterte halted VFA termination due to South China Sea tensions
Despite earlier asserting he wanted the military deal scrapped, President Rodrigo Duterte decided to suspend his earlier decision to terminate the Philippines’ Visiting Forces Agreement (VFA) with the United States due to rising tensions in the South China Sea during the pandemic.
— Rappler

186 free wifi zones to be installed in Davao de Oro
The Department of Information and Communications Technology (DICT) and the United Nations Development Programme (UNDP) will install a total of 186 wifi free zones all over Davao de Oro.
— Philippine Information Agency

PhilRice says DBM-proposed budget for 2021 points to 5% decline in funding
THE Philippine Rice Research Institute (PhilRice) said Monday that its prospective budget of P621 million for next year represents a 5% decline in funding levels for this year.
— BusinessWorld Online

P 1.8-B fertilizer deal imposes ‘heavy conditions’ on farmers
The P1.8-billion fertilizer supply deal of the Department of Agriculture (DA) under its COVID-19 response program is not only overpriced but has also forced farmers to turn to loan sharks, former Agrarian Reform Secretary Rafael Mariano said on Monday.
— Philippine Daily Inquirer

President Duterte signs law transferring Rizal capital, seat of gov’t from Pasig to Antipolo
President Rodrigo Duterte has signed a law transferring the seat of government and capital of Rizal. In signing Republic Act 11475 on June 19, the President formally gave Antipolo City that recognition, and removed Pasig which had held the role under Act 137 on paper.
— Eagle News

Palace doubts anybody wants Duque’s post as DOH chief
Malacañang on Monday expressed doubt on the claim that someone is eyeing the post of Health Secretary Francisco Duque III, who has been criticized for his alleged mishandling of the coronavirus disease 2019 (COVID-19) crisis.
— Philippine Star

PhilHealth chief: ‘Premature’ to meet Duterte over corruption allegations
For Philippine Health Insurance Corporation (PhilHealth) President and CEO Ricardo Morales, it was premature to go to President Rodrigo Duterte to discuss the corruption allegations in the agency following reports that P154-billion worth of funds could not be accounted for.
— Rappler

Less than half of nearly 9,000 slots for health workers for COVID-19 response filled
More than half of the nearly 9,300 available jobs for healthcare workers under the government s COVID-19 emergency hiring program have yet to be filled, President Rodrigo Duterte told Congress on Monday.
— GMA Network

DTI offers relief loans of up to P500,00 for small businesses
Small businesses, such as online merchants, may now borrow up to P500,000 from the government to help them survive the economic downturn caused by the COVID-19 pandemic, Sen. Sherwin Gatchalian said on Monday.
— Philippine Daily Inquirer

Japan, South Korea top leisure destinations of Filipinos
BEFORE the Covid-19 pandemic hit, Filipinos had been increasing their spending on holidays and vacations abroad, with an expectedly widening amount of extra funds for leisure and entertainment brought by an expanding economy.
— Business Mirror

Agencies to submit input on anti-terror bill this week — Roque
President Rodrigo Duterte is expecting to receive recommendations on the anti-terrror bill from government agencies this week, his spokesperson Harry Roque said on Monday.
— Philippine Star

Globe launches P50 5GB prepaid data promo
Globe launched a new promo for its prepaid users which significantly increases the amount of data Filipinos are used to getting for the price.
— Rappler

Families in areas eventually placed under GCQ to get second tranche of COVID-19 cash aid –DSWD
An official of the Department of Social Welfare and Development (DSWD) on Monday clarified that qualified beneficiaries in areas that were eventually placed under general community quarantine (GCQ) will still receive the second tranche of COVID-19 cash subsidy.
— GMA Network

Commuters, including elderly, still spend hours waiting for buses
Many commuters, including senior citizens, still had difficulty with public transportation despite the additional buses deployed in Metro Manila on Monday.
— GMA Network