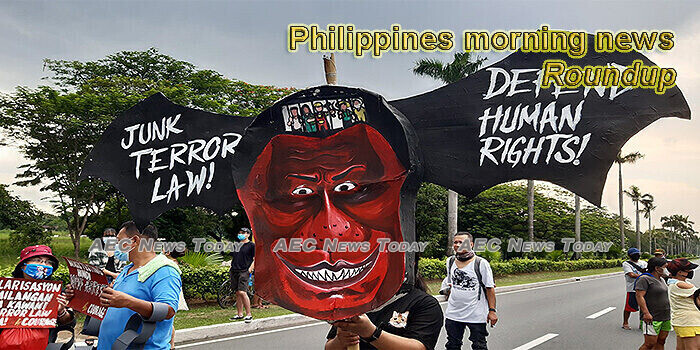 Faked Philippine records left false trail for Wirecard exec
Faked immigration records in the Philippines were used to throw off authorities seeking a former executive at Wirecard AG, who went missing after the German firm was implicated in an accounting scandal.
— Bangkok Post

Anti-terrorism bill signed into law without amendments
PRESIDENT RODRIGO R. Duterte on Friday signed the anti-terrorism bill despite widespread calls for a veto and further consultations on provisions that could infringe on constitutional rights.
— BusinessWorld Online

Govt anti-counterfeit agency to hunt down pirates online
THE Intellectual Property Office of the Philippines (IPOPHL) may soon have the authority to take down posts and web sites that breach IP laws under its revised enforcement rules.
— Business Mirror

Gov’t to determine fines for oil spill off coast of Iloilo City
The Department of Environment and Natural Resources will issue a notice of violation of the Philippine Clean Water Act to the company operating the power barge that exploded and spilled oil off the coast of Iloilo City on Friday.
— Philippine Daily Inquirer

PHL posts new record high infections in a day; Covid-19 cases now at 44,254
THE Philippines broke the previous record of new Covid-19 infections reported in a single day as a total number of 2,434 cases were recorded, bringing the number of patients who have contracted the disease to 44,254 on Sunday.
— Business Mirror

13 airlines to return to Naia 3 as international flights restart
THIRTEEN airlines that temporarily moved to Terminal 1 of the the Ninoy Aquino International Airport (Naia) are expected to return and start operating at Naia 3 after three months’ closure due to lack of airplanes, flights and passengers as countries shut borders against the spread of Covid-19.
— Business Mirror

Increased public contact causing surge in virus cases – DOH
Increased contact among the population as a result of the relaxation of quarantine measures is causing a surge in new coronavirus cases in the country, the Department of Health (DOH) said on Sunday.
— Philippine Daily Inquirer

DOF to ban online sale of ‘sin’ products
While cigarettes and liquor are enjoying brisk sales online in the time of pandemic and are delivered to the comforts of home of buyers, who may include minors, the Department of Finance (DOF) wants to stop the sale of the “sin” products in digital marketplaces.
— Philippine Daily Inquirer

With ‘fast depleting’ funds and more OFWs to help, DOLE seeks P2.5B
THE Department of Labor and Employment (DOLE) is asking for an additional P2.5 billion budget for its cash aid for Overseas Filipino Workers (OFWs), saying the fund released to them was already “fast depleting.”
— Business Mirror

Key destinations in Palawan lose over P3 billion in tourism receipts
THE era of mass tourism is over. As far as Gov. Jose Ch. Alvarez is concerned, tourists for Palawan will be “selective, targeted, prioritized.” Last year, he said, the entire province recorded some 1.5 million in tourist arrivals.
— Business Mirror

Paper requirements holding up return of OFW bodies from Saudi – DOLE
THE Saudi Arabian government has extended to early this week the deadline for the repatriation of the remains of 274 overseas Filipino workers (OFW).
— Business Mirror

‘Bias’ on agenda as hearing on ABS-CBN wraps up
ABS-CBN’s purported “political bias,” which had angered President Rodrigo Duterte and his allies, is the final item on the agenda as a joint House panel wraps up its deliberation on the shuttered media giant’s application for a new franchise.
— Philippine Daily Inquirer

Duterte vows no whitewash in soldiers’ slay
President Rodrigo R. Duterte on Friday vowed there will be no whitewash in the ongoing investigation regarding the death of four soldiers in Jolo, Sulu, earlier this week.
— Business Mirror

Immigration workers sacked over Wirecard
TWO IMMIGRATION workers were relieved over a false report that the former chief operating officer of German payment company Wirecard AG had entered the country in June before leaving for China.
— BusinessWorld Online

No more Bayanihan grants to LGUs after low usage rate of 15%
LOCAL GOVERNMENT units (LGUs) have used only P5.5 billion of their one-time grants to support their coronavirus disease 2019 (COVID-19) containment efforts, a Budget official said, adding that no more additional funding will be provided.
— BusinessWorld Online

BIR tweaks requirements for POGOs securing tax clearance
THE BUREAU of Internal Revenue (BIR) revised the list of documents and relaxed some of the rules Philippine offshore gaming operation (POGO) companies and their service providers have to comply with for tax clearance.
— BusinessWorld Online

Palace lauds DOST’s plasma-therapy initiative to treat COVID-19
The Department of Science and Technology (DOST) is set to start a study on convalescent plasma as adjunctive therapy for patients with COVID-19, Malacañang said Saturday.
— ABS-CBN News

DTI explains guidelines for getting refunds for events canceled because of pandemic
Parties who made payments for events that were canceled or scaled down prior to community quarantine have the right to demand a refund, according to the Department of Trade and Industry (DTI).
— BusinessWorld Online

31 countries open borders to Filipinos: DFA
The Department of Foreign Affairs reported Sunday that of the 177 countries/territories across the Americas, Asia and the Pacific, Europe, and Middle East/Africa included in the updated infographics on travel restrictions, 31 have already lifted the inbound border restrictions on Filipino travelers, subject to medical protocols on arriving.
— Philippine News Agency

Iloilo City wants economy restarted to protect jobs, businesses
Despite the continued rise in coronavirus disease (Covid-19) cases, Iloilo City is now working to bring its economy back to protect residents from losing their jobs and businesses.
— Philippine News Agency

No safeguard duty for imported float glass
The Tariff Commission sees no need to impose a safeguard measure or duty on float glass imports as its investigation showed that imports of these products are unlikely to increase in the near future and hurt the domestic industry.
— Philstar

Palace to abide by SC ruling on anti-terror law petition
Malacañang said it will abide by the Supreme Court (SC) ruling on the petition challenging the newly-signed Anti-Terrorism Act of 2020.
— Philippine News Agency

No need to refer asymptomatic patients to hospitals-DOH
The Department of Health (DOH) here recently issued a memorandum to all Local Government Units (LGUs) and health institutions informing them that asymptomatic COVID-19 cases should no longer be brought to DOH referral hospitals to prevent congestion.
— Philippine Information Agency

Lawmakers, groups urge Supreme Court to cure ‘repressive’ anti-terror law
Opposition lawmakers and an influential business group added their dissenting voices to the Anti-Terror law that President Rodrigo Duterte signed on Friday, July 3, and called on the Supreme Court to strike down as unconstitutional its “repressive” provisions as the law could be prone.
— Rappler

2K LSIs bound for Mindanao arrive in Sorsogon
Some 2,000 residents of Mindanao marooned in Metro Manila due to the coronavirus disease (Covid-19) health crisis have arrived at the Matnog Port in Sorsogon on board 80 passenger buses.
— Philippine News Agency

PHL economy could shrink by 4.5% in 2020
THE ECONOMY could contract by as much as 4.5% this year as the rise in coronavirus infections and implementation of lockdown measures continue to dent consumption, Moody’s Investors Service said.
— BusinessWorld Online

Dominguez firm vs. sale of gov’t assets for Covid-19 response
Any plan to sell government assets to address funding requirements for programs against coronavirus disease (Covid-19) remains a plan for Malacañang.Asked whether President Rodrigo R. Duterte has discussed this plan with Finance Secretary Carlos Dominguez III, the latter, in a Viber message to journalists said, No.
— Philippine News Agency

LSIs appeal for understanding over challenges amid crisis
Some locally stranded individuals (LSIs) appealed for public understanding amid resistance and negative comments hurled against people seeking to go home to their provinces and the government’s Hatid Tulong program.
— Philippine News Agency

Mayor charged over overpriced thermal scanners
A lawyer has filed charges against Mayor Darwin Estrañero of Tabuk City, Kalinga in connection with the purchase of allegedly overpriced medical supplies.
— Philstar

Search for missing fishermen extended
The search and retrieval operations for 12 Filipino fishermen and two other individuals who went missing in a sea collision in the waters off Mamburao, Occidental Mindoro is extended until tomorrow, the Philippine Coast Guard said yesterday.
— Philstar

DFA to temporarily close Aseana, Alabang offices for disinfection
The Department of Foreign Affairs (DFA) is informing the public that the Office of Consular Affairs located in Aseana in Parañaque City, and its Consular Office in NCR South (Metro Alabang Town Center) will be closed on Monday, July 6, until further notice, for disinfection of the office premises and implementation of other preventive measures.
— Philippine News Agency

Electric coops told to tap fiber optics for net connectivity
Electric Cooperatives (EC) or distribution utilities in the Cordilleras are enjoined to shift to fiber optics to allow the internet signal provided by the Department of Information and Communications Technology (DICT) to reach far-flung communities and provide for the educational needs of students.
— Philippine News Agency

Agricultural cooperatives to augment products for DSWD food packs
The Cooperative Development Authority (CDA) and the Department of Social Welfare and Development (DSWD) forged partnership to engage the agricultural cooperative as source of products for the Family Food Packs (FFPs), which are being distributed to identified communities and beneficiaries.
— Philippine Information Agency

How The Philippines Is Fighting COVID-19
After more than three months of hard lockdowns, the Philippines is now trying to ease out quarantine restrictions for its economy to bounce back.
— The Asean Post

Philippines to open another air terminal to international flights
The Philippines will reopen one more terminal at its main airport in the capital for international travel, expanding service operations to airliners from Japan and other countries beginning next week.
— Bangkok Post

Philippine broadband firm Converge ICT files for up to US$725mil IPO
Philippine fiber broadband services provider Converge ICT Solutions Inc, has filed for an initial public offering (IPO) of up to 35.92 billion pesos (US$725 million) on the local bourse, braving volatile markets amid the coronavirus pandemic.
— The Star Online

PH tops RE utilization in ASEAN
The Philippines ranks highest in the utilisation of renewable energy (RE) as part of its generation mix, beating its peers in the Southeast Asian region.
— Manila Bulletin

Vietnam morning news for May 27