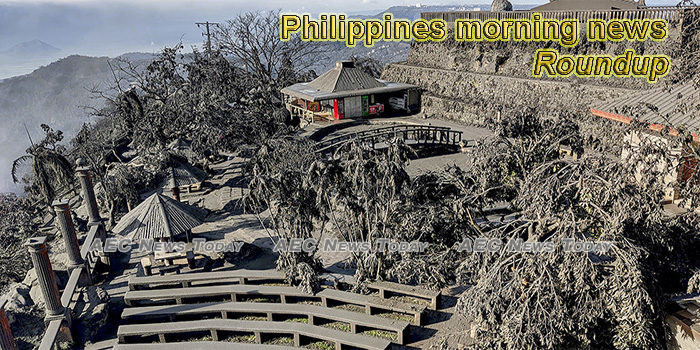 Duterte rejects Trump’s invite to attend special U.S.-ASEAN summit
President Rodrigo Duterte rejected United States President Donald Trump’s invitation for him, along with other leaders from the Association of Southeast Asian Nations (ASEAN), to fly to the US for a special summit in March.
— Rappler

Budget department sets spending deadlines for cash-based 2020 budget
THE Department of Budget and Management (DBM) has set deadlines for spending the 2020 Budget, requiring agencies to wrap up capital outlays for infrastructure projects by the end of the year while giving them until the end of 2021 or later to disburse funds to finance the completion procedures for these projects.
— BusinessWorld

PHL talent competitiveness improves to 46th
THE Philippines ranked 46th globally in the competitiveness of its talent around the world, with Filipinos achieving their best performance in terms of global knowledge and skills, a business school said in a study.
— BusinessWorld Online

Philippines prepares for Asean Para Games
Philippine Paralympic Committee president Mike Barredo said yesterday the next few weeks will be critical in ensuring the successful staging of the 10th Asean Para Games which the country is hosting on March 20-28 and expressed confidence that with the PSC’s support, things will fall into place.
— The Philippine Star

Public warned: No cure for n-CoV; only hygiene
The Health department said Thursday there are no drugs that will work on the new strain of the coronavirus as it underscored the need for the public to boost one’s immune system by observing proper hygiene.
— Manilastandard.net

EU urges Philippines to exploit export perk under GSP Plus
The European Union (EU) is urging the Philippines to maximize the use of the Generalised Scheme of Preferences (GSP) Plus, as only 25 percent of the country’s exports to the economic bloc is benefiting from the trade privilege.
— Business Mirror

China donates P7.5M for Taal relief and rehab
The Chinese government has turned over RMB1 million (approximately Php 7.5 million) to the Department of Foreign Affairs (DFA) for the relief and rehabilitation of the areas affected by the Taal Volcano eruption.
— Manila Bulletin

Over 400 mothers in Taguig donate breast milk to Taal evacuees
Over 400 nursing mothers donated their breast milk for babies affected by the Taal Volcano eruption during an event in Taguig City on Thursday, January 23.
— Rappler

Motorcycle taxi pilot run extension eyed
The government’s pilot study on motorcycle taxi services may be extended beyond its three-month period and even expanded to more participants, lawmakers said yesterday.
— The Philippine Star

Duterte: Crazy, rich people are thieves, should be killed
President Rodrigo Duterte lashed anew against businessmen involved in water concession agreements with the government, calling them thieves and saying that they should be killed.
— GMA Network

Ilocos Norte gets P25.5 million for waste recycling facility
The Department of Environment and Natural Resources–Environmental Management Bureau in Region 1 has granted P25.5 million to the provincial government of Ilocos Norte to fund the construction of a plastic recycling and resource recovery facility at Barangay Imelda, Marcos town.
— Manilastandard.net

EU investors pick Philippines as 2nd option in Asean
The Philippines is now viewed as a secondary market for investments by European Union (EU) investors in the Southeast Asian region amid uncertainties on the country’s plan to change the incentives regime and concerns on government’s review of contracts with the private sector.
— The Philippine Star

Korean visa processing to be shortened by end of February
Filipinos who want to visit South Korea can expect shorter visa processing period starting next month.
— The Philippine Star

Soccsksargen top cop seeks end to rising gun-related killings
The chief of the Police Regional Office (PRO) 12 (Soccsksargen) has ordered the region’s local police chiefs to put an end to the rising cases of gun-related killings and other crimes in their areas of responsibility or face relief.
— Philippine News Agency

DOH says 2nd test on Chinese boy, negative for coronavirus; but confirmatory test from Australia still needed
The Department of Health in Central Visayas said that the second test on the five-year old Chinese boy who first tested positive for the coronavirus showed he is now negative of the disease.
— Eagle News

Central Luzon police set up at eco-zones to prevent union organizing
The Police Regional Office in Region III (PRO3) has started setting up offices in special economic and freeport zones in Central Luzon to prevent militant labor groups from organizing workers’ union in factories and other business establishments.
— Rappler

LTFRB-7 won’t arrest motor taxis just as yet
Transportation authorities in Region 7 (Central Visayas) will not yet apprehend motor taxis following the decision of the inter-agency Technical Working Group (TWG) to extend the pilot run until March this year.
— Philippine News Agency

Tourist arrivals in Siargao, Dinagat islands up in 2019
The tourist arrivals in two well-known islands in Caraga Region increased during the first three quarters of 2019, the Department of Tourism in the area (DOT-13) said.
— Philippine News Agency

Comelec gives P600,000 in aid to Taal eruption victims
The Commission on Elections (Comelec) donated P600,000 worth of aid to victims of the ongoing eruption of the Taal Volcano.
— Rappler