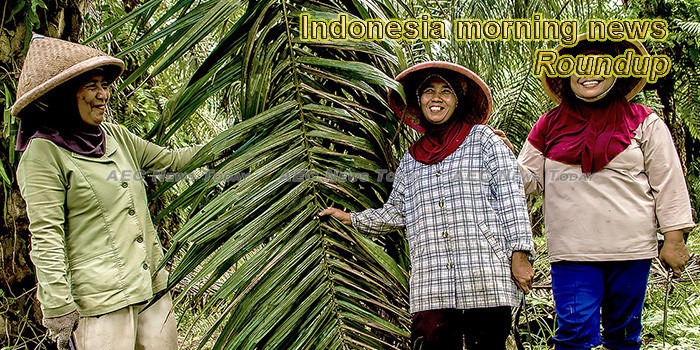 Rupiah Slumps despite Forex Reserve Increase
The rupiah exchange rate closed down on Monday, April 8. The increasing amount of foreign exchange (forex) reserves could not help the rupiah gain, despite the US dollar index’s depreciation.
— Tempo.co

Indonesia to file lawsuit over palm oil in European Court
Indonesia will file a lawsuit with the European Court, if the Delegated Regulation Supplementing Directive of the EU Renewable Energy Directive (RED) II, which will impact palm oil, is finally approved by the EU parliament.
— Antara News

Overseas Indonesians vote for country’s next president
Thousands of migrant workers from Indonesia will head to Hong Kong’s Victoria Park to cast their vote for the next Indonesian president this week.
— AL Jazeera

Millennials Rock the Vote in Indonesia (video)
Millennials are going to decide who gets to run Indonesia and its $4 trillion economy.
— Bloomberg

Indonesia oil slicks highlight weak enforcement against bilge dumping
Satellite imagery of the oil slicks show how common it is for ships to pump their waste oil out in Indonesian waters, an environmental monitoring group has found.
— Eco Business

Investors might want to buy tickets to Indonesia
It’s not Bollywood yet, but Indonesia could be germinating Asia’s next big film scene. After years of stifled growth and censorship, new cinemas are opening across the vast Southeast Asian archipelago at a rapid clip thanks to large cash investments.
— The Jakarta Post

Female fans in pursuit of Jokowi
Tears stream down Lilis Hastirini’s mascara-smudged face after she waited hours to snap a selfie with Indonesia’s president, only to be thwarted by a crush of other female fans with the same idea.
— The Asean Post

Indonesia’s Yogyakarta city in spotlight as more crosses desecrated
Mr Asmono, a resident of the Indonesian city of Yogyakarta, could not fathom what exactly had happened to his wife’s grave.
— Straits Times (annoying popups)

Jokowi slams opposition’s claims of election fraud
Incumbent Joko “Jokowi” Widodo is criticizing the opposition’s allegations that fraud was being committed by his side for the upcoming election, while electoral institutions state that such accusations were attempts to delegitimize the vote.
— The Jakarta Post

Prabowo claims 1 million people were in stadium on Sunday. Jokowi supporters say impossible.
Presidential candidate Prabowo Subianto has claimed that 1 million supporters attended his open rally at Gelora Bung Karno Main Stadium in Senayan, Jakarta, on Sunday. However, many are saying it is impossible for the stadium to house that many people.
— The Jakarta Post

Ducati Scrambles for Bigger Share of the Big Bike Market in Indonesia
Cakra Motor Sports, the authorized distributor of Ducati motorcycles in Indonesia, unveiled four new Scrambler models from the Italian manufacturer on Sunday (07/04) as it seeks to boost interest in the local imported big bike market.
— The Jakarta Globe

Indonesia’s Longest Underpass Built beneath Yogyakarta Airport
The Public Works and Housing Ministry (PUPR) is currently constructing the country’s longest underpass, which will span up to 1.3 kilometers, beneath the Kulon Progo Airport in Yogyakarta.
— Tempo.co

Cement players eye flat sales growth, seek consolidation
Big cement producers will continue their cost-efficiency strategy and seize opportunities to acquire other players amid a cement oversupply that has consistently dragged down their financial performances.
— The Jakarta Post

Indonesia’s desperate housewives chase selfies on election trail
Intellasia East Asia News Indonesian President Joko Widodo is mobbed by supporters wanting “selfies” Tears stream down Lilis Hastirini’s mascara-smudged face after she waited hours to snap a selfie with Indonesia’s president, only to be thwarted by a crush of other female fans with the same idea.
— Intellasia

Sick fisherman sacked, sent back to Indonesia
An Indonesian fisherman who traveled to Taiwan last year but became sick a month later has been sacked by his employer after being diagnosed with a severe renal problem.
— Asia Times

Papuan governments haven’t agreed over ownership shares in Freeport
State-owned mining holding company PT Indonesia Asahan Aluminium (Inalum) is waiting for a deal to be made between the Papua provincial and Mimika regental administrations on the ownership of 10 percent of the 51.23 percent of shares owned by Inalum in PT Freeport Indonesia (PTFI).
— The Jakarta Post

Minister: Don’t Force Me to Issue Another Bill on Airfare
Transportation Minister Budi Karya Sumadi said that he would not draft a new regulation in which ruling airfare based on sub-price and subclasses in the near future. Budi Karya asserted that it was the last option should airlines would not set varies ticket fares.
— Tempo.co

No decision yet on closing Komodo island, Indonesia says
The Indonesian government is delaying a decision on whether to prohibit public access to Komodo island, home to the fierce Komodo dragon, the country’s Environment Ministry said on Monday (April 8).
— Straits Times (annoying popups)

Jokowi heads to Kupang, Palangkaraya, Prabowo to Yogyakarta on campaign trail
Incumbent President Joko “Jokowi” Widodo is scheduled to meet thousands of his supporters in Kupang, East Nusa Tenggara, on Monday, while challenger Prabowo Subianto is set to hit the campaign trail in Yogyakarta.
— The Jakarta Post

Indonesia to install tsunami early warning system
Indonesia is set to install buoys and cable base tsunameters (CBT) near Mount Krakatau volcano on Wednesday in a bid to give early warning when tidal waves occur near the volcano, officials said.
— Business Standard