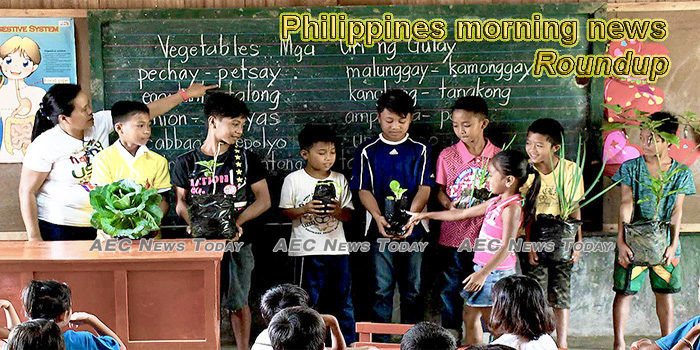 Filipinos from virus-hit cruise ship to come home
THE country’s top diplomat has ordered the Philippine Embassy in Tokyo to facilitate the immediate return of about 500 Filipinos aboard a novel coronavirus-stricken cruise ship docked in Yokohama.
— BusinessWorld

Filipina domestic helper in HK positive for COVID-19
THE Philippine Consulate General (PCG) in Hong Kong on Wednesday confirmed that a Filipina household worker has been tested positive for the coronavirus disease-2019 (COVID-19).
— Manila Times

NUJP submits 200,000 signatures to push House to take up ABS-CBN franchise bills
The National Union of Journalists of the Philippines (NUJP) on Wednesday submitted a list of 200,000 signatures to the House of Representatives in a bid to push the chamber to start deliberating on the bills seeking the renewal of the franchise of ABS-CBN Corporation.
— GMA Network

Virus slashes imports from China by 14.36%
IMPORTS from China suffered a year-to-date decline of 14.36 percent to 77,878 containers as several factories in China shut down amid the coronavirus outbreak, latest data from government showed.
— Business Mirror

Motorbikes main road killer in 2019 – MMDA
Motorcycles figured in more than half of 394 road crash deaths last year, making them the main killer on the road, data from the Metropolitan Manila Development Authority (MMDA) showed.
— The Philippine Star

DOH: We have enough protective personal equipment, test kits
The Department of Health (DOH) assured on Wednesday that it has enough stocks of protective personal equipment (PPEs) and test kits to be used by healthcare workers in quarantine facilities and persons under investigation (PUIs) for possible coronavirus disease 2019 (Covid-2019) infection.”
— Philippine News Agency

P80-M cash aid given to OFWs affected by travel ban: OWWA
The government has provided over PHP80 million worth of financial assistance to overseas Filipino workers (OFWs) who were stranded due to the travel ban imposed on China, Hong Kong, Macao, and Taiwan due to the coronavirus disease 2019 (Covid-19) outbreak.”
— Philippine News Agency

PHL children’s status in health, environment trails Asean neighbors
NOT all children in the Philippines are flourishing in terms of health, their environment and futures, according to a landmark report released by the World Health Organization (WHO), Unicef and The Lancet.
— Business Mirror

VFA termination after Bato’s visa cancellation an assurance to Duterte’s minions –Trillanes
President Rodrigo Duterte’s termination of the country’s Visiting Forces Agreement (VFA) with the United States was somehow a message of affirmation to his minions, aside from being a clear statement of pivot to China, according to former Senator Antonio Trillanes IV on Wednesday.
— GMA Network

Senate to tackle ABS-CBN franchise on February 24
The Senate public services committee will tackle the franchise renewal of media giant ABS-CBN on Monday, February 24, ahead of hearings at the House of Representatives.
— Rappler

RCEF disbursement at P1.52 billion as of February–DA
DISBURSEMENTS from a fund specifically allocated to support farmers nationwide was below 50 percent as of February, according to the Department of Agriculture (DA).
— Business Mirror

BIR to probe co-ops for ‘low tax compliance’
BUREAU of Internal Revenue (BIR) Commissioner Caesar R. Dulay has issued an order for the audit or investigation of cooperatives due to their “low tax compliance or nonpayment of tax.”
— Business Mirror

PSA gears for 2020 census of population in Zambo Peninsula
The Philippine Statistics Authority-9 (PSA-9) said it is hiring 345 additional workers to assist during the month-long census on population, which starts on May 4 this year.
— Philippine News Agency

LGU, AFP join hands to end insurgency via RCSP
“Reaching the unreached even in the most challenging situation is the key to ending poverty. Through this RCSP, in coordination with the Armed Forces of the Philippines (AFP), we will empower individuals so that everyone becomes a channel of peace,” said Mayor Levi Edma as he lauds the government.
— Philippine Information Agency

ARTA sets deadline for all gov’t agencies to act on pending applications
The Anti-Red Tape Authority (ARTA) has ordered all government agencies to act on all pending applications and automatically approve them if they come with complete requirements before March 7, to comply with the prescribed processing time for transactions under the Ease of Doing Business (EODB) Act.
— Philippine Information Agency

NoCot village workers get pay hike
Governor Nancy Catamco announced on Tuesday that the provincial government has approved the increase in the honorarium of barangay workers.
— Philippine News Agency

Sotto: Slain BuCor exec said he wanted to tell all on GCTA mess
Slain Bureau of Corrections official Fredric Anthony Santos had indicated his intention to tell all he knew about the misapplication of the Good Conduct Time Allowance Law, Senate President Vicente Sotto III said on Wednesday.
— GMA Network

Poverty and Duterte BBB
On Feb. 5, I attended the lecture by Dr. Dennis S. Mapa, National Statistician and head of the Philippine Statistics Authority (PSA), and Professor at the UP School of Statistics (UPSS).
— BusinessWorld

IP leaders vow support vs. NPA recruitment in campuses
Amid the reports on the growing influence of the communist New People’s Army (NPA) among youth in Agusan del Norte, top leaders of indigenous peoples (IPs) in the province vowed to support government measures against the communist rebel group’s recruitment in campuses.
— Philippine News Agency

UN, Japan reaffirm support for Bangsamoro
The United Nations (UN) and the Japanese government have reaffirmed their commitment to aid peacebuilding efforts in the Bangsamoro region, the Office of the Presidential Adviser on the Peace Process (OPAPP) said on Wednesday.
— GMA Network

TESDA urges Ilocanos to turn skills into livelihood
Through their continuing promotion for skills development, the Technical Education and Skills Development Authority (TESDA) in Ilocos Norte is enjoining the participation of Ilocanos to enroll and find interest in various technical-vocational programs.
— Philippine Information Agency

Nova Parojinog seeks acquittal, opposes transfer to BJMP
Former Ozamiz City vice mayor Nova Princess Parojinog has moved for her acquittal in two criminal cases and opposed a motion by prosecutors for her transfer from police custody to a facility of the Bureau of Jail Management and Penology (BJMP).
— GMA Network

Manila fails DILG’s good financial housekeeping standards
Manila failed to make it on the list of 2019 Good Financial Housekeeping (GFH) passers that the Department of the Interior and Local Government (DILG) released on February 14.
— Rappler

DA launches audit of programs, projects in Soccsksargen
The central office of the Department of Agriculture (DA) has launched an audit on various programs and projects previously implemented in Region 12 or Soccsksargen that had been flagged with some “issues and concerns”.
— Philippine News Agency