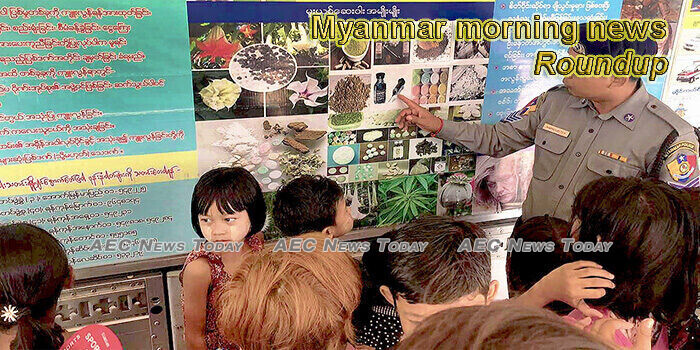 Internet blackout in Myanmar’s Rakhine enters second year
The internet shutdown in Myanmar’s conflict-ridden northwest, described by rights groups as the world’s longest, entered a second year Sunday with locals and campaigners appealing for an end to the blackout as coronavirus fears grip the region.
— CNA

Diversifying Myanmar’s economy should be a priority for the next government
When Myanmar’s military regime began opening up the country politically and economically in 2010, one motive was to alleviate the country’s overreliance on China.
— AEC News Today

Myanmar reports three new COVID-19 cases and four recoveries
Three more Myanmar returnees have tested positive for COVID-19, according to the health ministry at 8pm on June 21. Four others have recovered.
— Myanmar Times

More than 1600 fined for not wearing masks in Mandalay
The number of people not wearing face masks when going outside is increasing in Mandalay Region, resulting in action taken against more than 1600 violators within a month, according to the Mandalay City Development Committee (MCDC).
— Myanmar Times

Rebooting Myanmar’s Stalled Peace Process
What should be done? With the National League for Democracy likely to win another term, the government, military and ethnic armed groups should use the hibernation period constructively to review causes of the current impasse, rebuild trust through sustained informal dialogue, and take steps to reinvigorate the peace process from 2021.
— Crisis Group

Every action counts: How NGOs are supporting Myanmar’s displaced—Part 1
Its people are slowly emerging from long-standing military rule to one rooted in democracy, which presents myriad challenges and opportunities for improvements in humanitarian conditions across the country.
— Reliefweb

Myanmar buses get private pods to lower coronavirus risk
A travel company in Myanmar has modified a dozen of its long-distance buses to make private pods for passengers in a bid to ease fears about coronavirus infection.
— Daily Maverick

New Myanmar daily minimum wage likely in November
The country’s new minimum daily wage is expected to be set in November, a member of the national committee that sets the wage said on June 18.
— Myanmar Times

Construction of Korea-Myanmar Industrial Complex to begin this year
Construction of the Korea-Myanmar Industrial Complex (KMIC) in Yangon is expected to commence before the end of the year despite the COVID-19 pandemic, Kim Gun-Woo, general manager of Korea Land and Housing Corporation representative office in Myanmar, told The Myanmar Times.
— Myanmar Times

Myanmar gets innovative in wishing Suu Kyi a happy birthday during COVID-19
Because of banning and restricting on social gatherings and events imposed by government due to COVID-19 outbreak, people extended their best wishes to State Counsellor Aung San Suu Kyi on her 75th birthday which fell yesterday in a variety of ways.
— Mizzima

Myanmar’s unsteady exit from China’s orbit
When Myanmar’s military regime began opening up the country politically and economically in 2010, one motive was to alleviate the country’s . Ten years down the road, in the context of China’s Belt and Road Initiative (BRI) and the of triggered by against the Muslim Rohingya minority, China’s influence appears hardly diminished.
— Pinevillevoice

Myanmar reports 23 new Covid cases
Myanmar reported 23 cases of coronavirus infection on Friday among a group of people held in quarantine there after being deported from Thailand.
— Bangkok Post

Human Rights Watch Calls on Myanmar to End Internet Ban in Rakhine and Chin States
Human Rights Watch Friday called on Myanmar to end its yearlong internet shutdown, which has prevented more than a million people in Rakhine and Chin states from getting information about the coronavirus pandemic and hampered the work of aid workers and journalists in a war zone.
— Radio Free Asia

The ‘kalar’ controversy shows many in Myanmar aren’t listening
In defending “kalar” as a friendly term, many Myanmar social media users are failing to listen to people who are merely asking to be treated with respect.
— Frontier Myanmar

Banks circle rare Myanmar buyout
The battle for control of Irrawaddy Green Towers could lead to a rare acquisition financing in Myanmar and the country’s largest-ever syndicated loan.
— Reuters

Myanmar to introduce new bank note with late General Aung San’s image
The Central Bank of Myanmar announced the issuance of new 500-kyat bank notes with the image of late national hero General Aung San, the Information Ministry has announced in a statement.
— The Star Online

Myanmar migrant workers return home via Chinshwehaw border
A total of 47 Myanmar nationals who returned from China came back to Myanmar through Myanmar-China border in Chinshwehaw on 19 June.
— The Global New Light of Myanmar

Myanmar grapples with teacher shortage ahead of school reopening
The Ministry of Education plans to begin classes for senior students on July 21 but faces an uphill battle to get schools ready in line with strict health guidelines.
— Frontier Myanmar

Myanmar’s Ethnic Parties Find Strength in Unity as They Prepare for General Election
Having consolidated their bases, Myanmar’s ethnic parties plan to work together in the coming election to achieve their common goals of federalism and self-determination.
— Irrawaddy

8 hotels in Bagan granted to reopen
Eight hotels in Bagan region have reopened since 15 June because they already passed the inspection process and met with the criteria set by the Public Health Department, said an official from the Directorate of Hotels and Tourism (DHT Bagan-branch).
— The Global New Light of Myanmar

NREC Union Minister inspects register office for gem merchants
Union Minister for Natural Resources and Environmental Conservation U Ohn Win inspected the building to accept the registration of gem merchants and guests, who will come to the Myanmar Gems Emporium, near Mani Yadana Jade Hall and next to Jade Garden in Nay Pyi Taw yesterday.
— The Global New Light of Myanmar

Myanmar grapples with teacher shortage ahead of school reopening
The Ministry of Education plans to begin classes for senior students on July 21 but faces an uphill battle to get schools ready in line with strict health guidelines.
— Frontier Myanmar

Farmers to get COVID-19 relief loans of K50,000 per acre
The Myanma Agricultural Development Bank-MADB under the Ministry of Planning, Finance and Industry will provide farmers nationwide the loan of K 50,000 per acre from the Special COVID-19 Relief Loan, according to U Min Thu, MADB’s Managing Director.
— The Global New Light of Myanmar

H&T Minister, Korean Ambassador discuss COVID impacts on tourism industry
Union Minster for Hotels and Tourism U Ohn Maung held a videoconference with Ambassador of the Republic of Korea to Myanmar from his office in Nay Pyi Taw yesterday, discussing the impacts of COVID-19 on tourism sector and relief plans.
— The Global New Light of Myanmar

Support to fisheries sector amidst COVID-19 should not be delayed
The government is planning to provide financial support to the fisheries sector, which is facing the economic challenges caused by COVID-19.
— The Global New Light of Myanmar

KIA Warns Civilians Fighting with Myanmar Military Could Erupt Anytime
The Kachin Independence Army told locals in Kutkai, Shan State that clashes could break out anytime in their area, despite a ceasefire from the Myanmar military over COVID-19.
— Irrawaddy

DG of Ministry of State Counsellor Office meets press
Director-General of the Ministry of the Office of the State Counsellor U Zaw Htay met the internal and external media in accord with the social distancing procedures at the Press Hall of the Presidential Palace in Nay Pyi Taw on 19 June, and explained the current situation.
— The Global New Light of Myanmar

The Day Myanmar’s First Prime Minister Met Winston Churchill
As a strong defender of imperialism, Sir Winston Churchill defused any potential tension with U Nu by saying they must bury old animosities.
— Irrawaddy

The Day the British Sentenced Folk Hero Maung Thant to Death
On this day in 1911, a poor farmer who embodied rural people’s hopes of a better life and opposition to colonial rule was sentenced to hang by the British.
— Irrawaddy