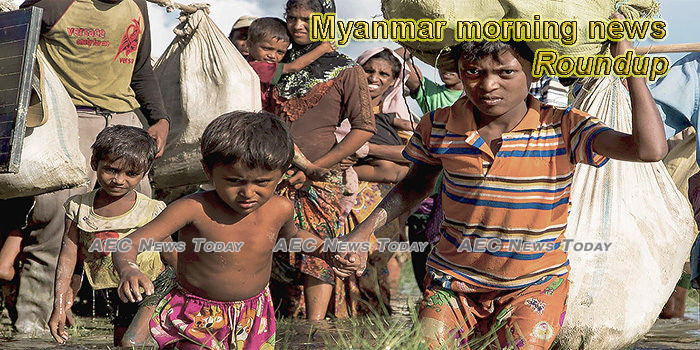 Myanmar COVID-19 cases stand at 224 as 17 more cases reported on 30 May 2020
Seventeen more cases of COVID-19 were reported in Myanmar on 30 May, making the country’s total tally 224.
— The Global New Light of Myanmar

Energy ministry tells bidders no extension for solar tender
Myanmar’s Ministry of Electricity and Energy has rejected requests from prospective bidders for a major solar farm tender to extend its one-month deadline, which they say is impossible to meet because of the COVID-19 crisis and tough conditions attached.
— Myanmar Times

Magway reopens express bus lines outside region
The passenger highway bus lines in Magway region have been granted permission to resume their services outside of the region, according to the Magway Region Licencing and Transportation Supervision Department.
— The Global New Light of Myanmar

Rohingya Influx and its Economic Significance for Bangladesh
It is generally perceived that refugees are curse for host countries though the former often play positive roles for the latter.
— Modern Diplomacy

Total border trade value exceeds $7.13 bln
The total trade value at 18 border trade camps as of 15 May, this fiscal year (FY) exceeded US$7.13 billion, according to the Ministry of Commerce.
— The Global New Light of Myanmar

Stop tobacco industry exploitation of children and young people
More than three decades since the world started observing the World No-Tobacco Day in 1987, smoking remains a major health problem, blamed for so many illnesses such as lung cancer.
— The Global New Light of Myanmar

Mandalay reopens highway buses to states/region
Mandalay-based highway buses will resume their services to other states and regions starting from 1 June, in line with the health guidelines issued by the Ministry of Health and Sports, according to Mandalay Region government.
— The Global New Light of Myanmar

Using Myanmar’s supplementary budget to respond to and recover from COVID-19
Globally, the COVID-19 pandemic continues to claim lives and livelihoods. And the crisis is battering essential services that secure the education and protection of children, often with deadly costs. The most vulnerable children – such as those affected by poverty, exclusion or family violence – are facing even greater risks, cut off from existing support.
— Reliefweb

Stimulants worth over 13 mln USD seized in Myanmar
Myanmar authorities seized a large haul of stimulants in Rakhine state, according to a release from the Office of the Commander-in-Chief of the Defense Services on Sunday.
— Xinhua

Mawlamyine lab to start testing for COVID-19
Testing for COVID-19 will soon be conducted at a public health laboratory in the first week of June in Mawlamyine, Mon State, following the donation of a RT-PCR machine by Wai Aung Gabar Jewellery Company, according to the health ministry.
— Myanmar Times

Fruit exports to China now permitted through Lwejel, Kampaiti
Myanmar can now export fruits to China through Lwejel and Kampaiti borders besides Muse, according to the Ministry of Commerce. Earlier, watermelon, muskmelon, mango and plum were allowed to export to China only through the Muse border.
— The Global New Light of Myanmar

Myanmar’s Meaningless Unilateral Ceasefires
The many unilateral ceasefires seem meaningless — they have not stopped or even lessened the fighting so far.
— The Diplomat

Special flight arrives in Yangon with WHO medical supplies for fight against COVID-19
A first flight bringing medical supplies and laboratory equipment donated by the World Health Organization-WHO to support Health and Sports Ministry’s fighting against the COVID-19 landed at Yangon International Airport at 10:15 am yesterday.
— The Global New Light of Myanmar

Mandalay warehouses receive 60,000 bags of reserved rice so far
A total of 60,000 bags for the state’s emergency rice reserve have been stored so far in the warehouses in Kyaukse and Myohaung warehouse in Amarapura Township of Mandalay, owned by the Department of Consumer Affairs under the Ministry of Commerce, according to Mandalay supervision unit for the storage of emergency rice reserve.
— The Global New Light of Myanmar

Origin Coffee: A cafe and roastery set to promote Myanmar coffee
With a vision to expand the coffee culture in Myanmar and to deepen the world’s appreciation for Myanmar’s excellent produce, Origin Coffee & Roastery opened up its flagship shop in March at the Central Boulevard, a spacious and contemporary place decorated with mirrors.
— Myanmore

Construction Minister inspects infrastructure buildings in Mandalay, Kayah
UNION Minister for Construction U Han Zaw inspected the development projects in Mandalay Region and Kayah State via virtual meeting on 30 May.
— The Global New Light of Myanmar

93 Mandalarian businesses to get coronavirus loan
More than 400 applicants from Mandalay Region have applied for emergency coronavirus pandemic fund and 93 of them have been approved to receive the loan so far.
— The Global New Light of Myanmar

The Day Britain’s Queen Visited Myanmar’s Imperial Pavilion
The natural and cultural riches of colonial Burma were displayed for Londoners in 1924 at the British Empire Exhibition.
— Irrawaddy

Myanmar citizens come back home from Thailand via Kawthoung border
A total of 129 Myanmar migrant workers from Thailand, 70 males and 59 females, arrived back in Kawthoung via Ranong in Thailand by waterway yesterday.
— The Global New Light of Myanmar

KUM appeals to accommodate stranded Myanmar Konyak Nagas in Nagaland
The Konyak Union Myanmar (KUM) on Saturday pointed out that the lack of medical personnel and facilities, vehicular roads and other basic essential services in the region and requested that stranded Myanmar Konyak Nagas be accommodated in quarantine facilities in Nagaland.
— Morung Express

1,152 returness arrive back in Myanmar through Myawady border bridge
A total of 1,152 Myanmar migrant workers from Thailand returned through the Myanmar-Thai Friendship Bridge (2) yesterday.
— The Global New Light of Myanmar

World No Tobacco Day 2020
By Dr Aung Tun Every year, on 31 May, WHO and Partners celebrate World No Tobacco Day. The theme of 2020 is protection of younger generations, focusing on “protecting youth from industry manipulation and preventing them from tobacco and nicotine use.
— The Global New Light of Myanmar

Union Construction Minister inspects development projects via virtual meeting
Union Minister for Construction U Han Zaw and party (right photo) inspect the Yaw Chaung Bridge on Pakokku-Seikphyu road in Magway Region via the video conference on 30 May 2020.
— The Global New Light of Myanmar

Mawlamyine lab to start testing for COVID-19
Testing for COVID-19 will soon be conducted at a public health laboratory in the first week of June in Mawlamyine, Mon State, following the donation of a RT-PCR machine by Wai Aung Gabar Jewellery Company, according to the health ministry.
— Myanmar Times

No one injured in veranda collapse at five-storey building in Yangon
A veranda of five-storey apartment building collapsed in Sangyaung Township, Yangon, yesterday evening, and members of Fire Services Department and rescue teams evacuated the residents.
— The Global New Light of Myanmar