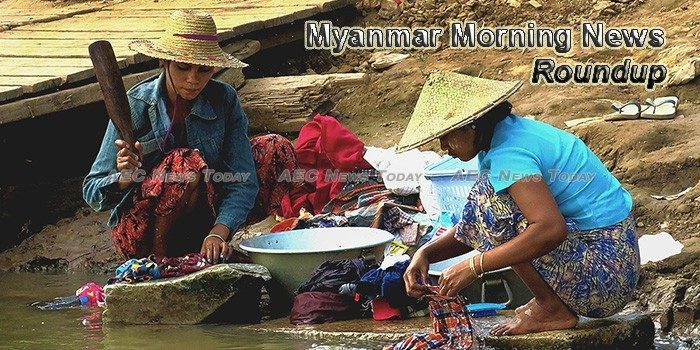 Some businesses fret over Myanmar wage proposal
Many business organisations in Myanmar have lodged objections against improving daily wages as approved by the National Committee for Designating Minimum Wage earฌlier this month.
— The Nation

Garment exports up as govt, industry work on longterm strategy
Myanmar exported US$1.86 billion (2.51 trillion kyat) worth of products from garment factories operating under the “cut-make-pack” (CMP) system as of the first week of January in fiscal year 2017-2018, according to the Ministry of Commerce.
— Eleven Myanmar

Myanmar, Bangladesh meet amid doubts about Rohingya repatriation plan
Hamid Hussain, a 71-year-old Rohingya Muslim farmer, first fled Myanmar for Bangladesh in 1992. He went home the next year under a repatriation deal between the two neighbors, only to repeat the journey last September when violence flared once more.
— Reuters

Why China won’t allow growing global outrage over Rohingya crisis to undermine the Myanmar regime
As the Myanmar government’s violent policy towards its Rohingya Muslims drew increasing international condemnation in 2016, the country’s sometime icon of democracy, Aung San Suu Kyi, declined to speak out for the persecuted minority.
— Scroll

Reuters chief says journalists jailed in Myanmar need the public
Reuters reporters Wa Lone and Kyaw Soe Oo were jailed last month for what Adler described as routine journalistic work. The Myanmar government claims they “illegally acquired information with the intention to share it with foreign media,” according to a statement it gave to Reuters last month.
— CNNMoney

Rohingyas want to see security, rights ensured before return Myanmar: UNHCR
Rohingyas who fled from the persecution of Myanmar security forces want to see a positive development including citizenship, security, and scope for enjoying their basic rights before they return to their country from Bangladesh, the UNHCR said recently.
— Daily Times

Marine export earnings hit over $497 million
According to the Fisheries Department (Yangon region), the country has earned nearly US$498 million (672.66 billion kyat) from exports of marine products during this fiscal year.
— Eleven Myanmar

Earthquake hits Myanmar, no damage reported
An earthquake with a 5.2 magnitude shook Myanmar on Sunday morning according to the Seismology Observation Office of the Thai Meteorological Department.
— Bangkok Post

Myanmar, BD meet amid doubts about Rohingya repatriation plan
Hamid Hussain, a 71-year-old Rohingya Muslim farmer, first fled Myanmar for Bangladesh in 1992. He went home the next year under a repatriation deal between the two neighbours, only to repeat the journey last September when violence flared once more.
— The News

India, Myanmar border villagers to get passes
India and Myanmar are set to streamline free movement of people within 16 km along their borders. The Centre has asked the four States that share an unfenced border with Myanmar to distribute “border pass” to all residents living within 16 km from the boundary line. It also asked the governments of Arunachal Pradesh, Nagaland, Manipur and Mizoram to enrol the border residents under Aadhaar on a war footing.
— The Hindu

EuroCham Myanmar chief: ‘We advocate for a fairer, level playing field’
Myanmar recently enacted a new companies law and before that a new investment law to encourage more foreign investment. What effect will these changes have, and what do businesses think about the announcement that the companies law will not come into effect until August 1, 2018?
— Frontier Myanmar

UEHRD stresses the importance of health care in troubled Rakhine
The Union Enterprise for Humanitarian Assistance, Resettlement and Development (UEHRD) provided a briefing on January 12 about the need for comprehensive healthcare for the people in crisis-ridden Rakhine State.
— Mizzima