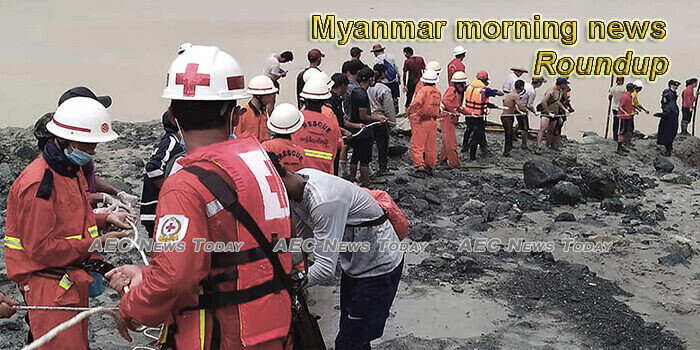 Myanmar opens to domestic travel
Myanmar opened all of its tourist destinations to local travellers and foreigner resident in the country last week, but the ban on international flights to and from the country remains in place until 31 July at the earliest.
— TTR Weekly

Myanmar poet accused of staging protest over internet blackout
Maung Saung Kha, a prominent Myanmar poet and activist, appeared in court on Tuesday to face accusations that he helped stage an unlawful protest demanding an end to internet blackouts imposed on two of the country’s poorest states.
— Reuters

Myanmar army sacks officers over landslide tragedy
Two high-ranking officers were fired for having “failed their responsibilities” after a landslide in Myanmar killed at least 174 jade miners, the country’s military said on Monday in a rare public sanctioning.
— Macau Business

First LNG ship-to-ship operation completed in Myanmar
But full project logistics for the unloading of larger LNG carriers has yet to emerge.
— Trade Wind News

Military officer, security and border affairs minister charged for Hpakant landslide
An officer commanding a military unit and the Security and Border Affairs Minister from Kachin State government committee are being taken actions against the flash landslide occurred in Kachin State, according to the Military announcement.
— Eleven Myanmar

Kachin residents fearful of losing land to secretive China-backed industrial project
One day in late 2018, residents of Namjin, Kachin state, noticed drones fixed with cameras buzzing above their usually quiet village. Then word spread that some people from China were visiting an area nearby.
— Myanmar Now

UK Imposes Sanctions on Myanmar Military Chief, Deputy for Abuses Against Rohingya, Others
The UK has imposed sanctions on Senior General Min Aung Hlaing and Vice Senior General Soe Win for alleged rights abuses against the Rohingya and other groups in Myanmar.
— Irrawaddy

Myanmar cracks down on unregistered SIMs
Myanmar has completed a nationwide SIM re-registration programme, with millions of SIMs being disconnected by the country’s operators.
–Deloping Telelcoms

Looters target Myanmar temple treasures in tourist slump
A squad of gun-toting police patrol Myanmar’s sacred site of Bagan under the cover of night, taking on plunderers snatching relics from temples forsaken by tourists due to coronavirus restrictions.
— The Phnom Penh Post

Covid-19’s hidden threat in Myanmar
Covid-19 lockdowns and internal travel restrictions have been lifted across Myanmar but that doesn’t mean its virus crisis is over – far from it.
— Asia Times

Clashes in Myanmar’s Shan State Force Over 700 Villagers to Flee
The Irrawaddy visited hundreds of villagers who fled fighting between Myanmar’s military and the Restoration Council of Shan State.
— Irrawaddy

Myanmar Ministry Orders Monastery to Remove Buddha Statues Designed Using Occult Practices
A Naypyitaw monastery has been told to remove 66 Buddha statues that violate Theravada Buddhism and were apparently made in a bid to boost the wealth of powerful donors.
— Irrawaddy

Myanmar army sacks officers over landslide tragedy
Two high-ranking officers were fired for having failed their responsibilities after a landslide in Myanmar killed at least 174 jade miners.
— Frontier Myanmar

TB must not be ignored amidst COVID-19
By providing tuberculosis-TB screening services to patients at fever clinics during the ongoing COVID-19 pandemic, the government has shown its commitment to fighting TB, the world’s most deadly infection.
— The Global New Light of Myanmar

An old controversy returns as govt gets the green light to campaign early
Critics say new campaign rules favour the NLD by allowing government officials to campaign, but confusion over the constitution enabled the USDP to do the same in 2015.
— Frontier Myanmar

Myanmar-Australia cooperation in revitalization of University of Yangon
Since Myanmar’s political transition in 2011, Australia has assisted in many areas of Myanmar’s socio-economic development.
— The Global New Light of Myanmar\

The Day a British Benefactor of Myanmar Youth and Education Passed Away
On this day in 1960, John Sydenham Furnivall, a British educator and literary scholar whose career spanned colonial and independent Myanmar, passed away in England.
— Irrawaddy

Statement on the temporary internet suspension in Rakhine and southern Chin states
There have been concerns raised by some quarters over the suspension of the internet in some townships in Rakhine and Chin States, expressing fears that the internet blackout may endanger the lives of vulnerable civilians facing the COVID-19 pandemic in affected areas.
— The Global New Light of Myanmar