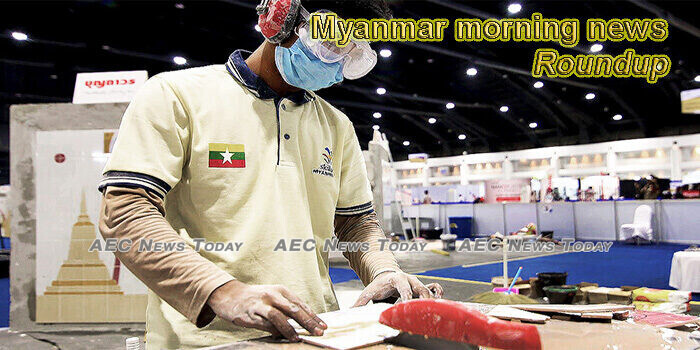 Myanmar’s foreign trade reaches over 28 bln USD in 10 months of FY 2019-20
The total trade between Myanmar and foreign countries reached over 28.3 billion U.S. dollars in ten months of present fiscal year (FY) 2019-2020, according to figures released by the Commerce Ministry on Monday.
— Xinhua

Pineapple exporters eye legitimate channel to China
China has not yet responded to the Phytosanitary measures and inspection results sent by Myanmar to have legal export channel to China, according to Myanmar Pineapple Producers and Exporters Association (MPPEA).
— The Global New Light of Myanmar

COVID-19 Recovery: Myanmar Needs to Move Towards Digital Transformation
As the COVID-19 pandemic forced lockdowns across the globe, there has been a dramatic increase in the use of digital technologies in various aspects of human life.
— Mizzima

A Deadly Gamble: Myanmar’s Jade Industry
The tragedy was all too familiar in Myanmar’s infamous northern jade mining town of Hpakant: In the early hours of the morning, hundreds of jade pickers teetered on the edge of unstable mountains to scavenge the loose debris dumped by trucks.
— The Diplomat

Woman Allegedly Assaulted by Myanmar Soldiers in Rakhine Files Complaint With Police
A grandmother from a village in Myanmar’s volatile Rakhine state has filed a rape complaint against three Myanmar Army soldiers she accused of assaulting her last month, people assisting her with the charges said.
— Radio Free Asia

5 imported COVID-19 cases recorded in Myanmar
The total number of COVID-19 cases in Myanmar has risen to 336, with five more confirmed cases on Monday, according to the Ministry of Health and Sports.
— Xinhua

Myanmar’s religious leaders appeal for peace and the common good
As Myanmar prepares for a general election on Nov. 8 and a major peace conference (the 21st Century Panglong Conference) on Aug. 12 through Aug. 14, the country’s main religious leaders—Buddhist, Christian, Muslim, Hindu and Sikh—have appealed to the nation’s civilian, ethnic, military and other religious leaders to make a determined joint effort for peace, justice, protection of the environment and the consolidation of democracy.
— America Magazine

Over 390 Mandalarian businesses receive COVID-19 loan: MRCCI
More than 390 coronavirus-affected businesses from Mandalay Region have been approved so far to receive the emergency Coronavirus Fund, said an official of the Mandalay Region Chamber of Commerce and Industry (MRCCI).
— The Global New Light of Myanmar

Myanmar’s Jade-Rich Hpakant Caught in a ‘Winner’s Curse’
The government must reform the way gems are mined and revenue is reported, or locals in Hpakant will continue to suffer from the ‘curse’ of their area’s jade wealth.
— Irrawaddy

Trade deficit up two-fold in current fiscal year
Myanmar’s trade gap has significantly widened as of 3 July in the current financial year2019-2020 to more than US$1.8 billion from $890.6 million registered in the corresponding period of the 2018-2019FY, according to data provided by the Ministry of Commerce.
— The Global New Light of Myanmar

Enrolment begins at high schools nationwide
Amid the coronavirus outbreak, the high school enrolment for Grade 10 and 11 of the 2020-2021 academic year has started on 13 July in the regions and states, in conformity with the precautionary measures of the pandemic issued by the Ministry of Health and Sports “The admission to high schools across the country has started.
— The Global New Light of Myanmar

Difficulties in Voting Leave Myanmar Migrants in Limbo as Election Approaches
Myanmar migrants and rights groups are voicing concerns that millions of voters living abroad will be left out of November’s election, just as they were in 2015.
— Irrawaddy

The Day General Aung San Gave His Final Speech
Though criticized for its harsh wording, the address by Myanmar’s independence hero on the reconstruction of Myanmar and public morality remains popular after all these years.
— Irrawaddy

Amyotha Hluttaw resumes with queries to ministries of commerce, education
The 17th regular session of Second Amyotha Hluttaw began yesterday, and new representatives of Tatmadaw swore and signed on oath in front of Speaker Mahn Win Khaing Than.
— The Global New Light of Myanmar

Commercial farming of endangered species in Myanmar may boost demand for rare animals: WWF
Wildlife and environmental conservation group WWF and Fauna & Flora International (FFI) have warned that the change in the Myanmar law allowing for commercial farming of endangered species may boost the demand for rare animals in the world.
— DDI News

Toyota to Fully Resume Global Output for First Time Since February
With the resumption of output at its plant in Venezuela, Toyota was set on Monday to return to full production after COVID-19 shutdowns for the first time since February.
— Irrawaddy

‘No rain, no visitors and no income’: Bagan adjusts to tourism crash
In common with popular destinations around the world, Bagan has been hit hard by the economic effects of the pandemic and many there who rely on tourists for a living have had to adapt to survive.
— Frontier Myanmar