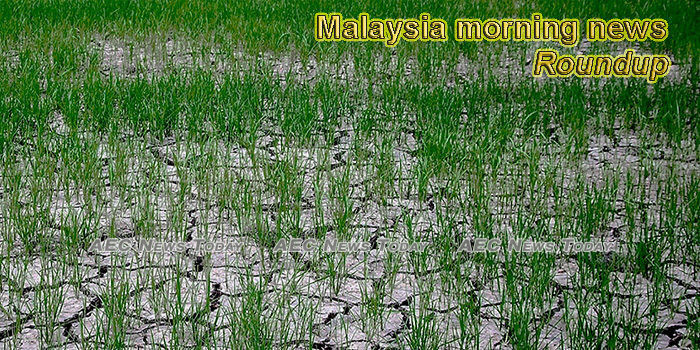 Court fixes June 24 to hear submissions in Najib-Arul audit-tampering trial
The High Court has fixed June 24 to hear the submissions of both parties in the 1Malaysia Development Bhd (1MDB) audit-tampering trial involving former prime minister Datuk Seri Najib Razak and former 1MDB CEO Arul Kanda Kandasamy over the prosecution’s application to amend the charges levelled against them.
— The Star Online

A Matter Of Major Public Interest Deserves Disclosure
What do the doctors for President Trump and Prime Minister Muhyiddin have in common? It is that they are both apparently willing to admit they are ready to sign off pre-prepared medical testimonials with political undertones on behalf of their patients.
— Sarawak Report

Bad news for booze? Malaysia mulls alcohol rules overhaul as industry battles COVID-19 impact
Malaysia is considering a potential reviews of regulations governing alcohol sales and/or production following a rash of drunk driving accidents in the country, marking yet another hurdle for an industry trying to find its feet due to COVID-19.
— Food Navigator

RMCO: Malaysians are playing their part
The Recovery Movement Control Order (RMCO) enters its eighth day today and Malaysians are seen to be in compliance with standard operating procedures (SOPs), especially in public places.
— The Borneo Post

Covid-19: Kalimantan’s death toll at 182, confirmed cases 3,612
Sarawak’s neighbouring Indonesian territory, Kalimantan, has recorded a total of 182 deaths from Covid-19 and 3,612 as of yesterday, a news portal reported.
— The Borneo Post

Business sectors urged to do online services
The business sectors have been urged to make use of technology and market their services or products online.
— New Sarawak Tribune

Sarawak consumers told to reach out to SEB if charged exorbitant electricity bills during MCO
Electricity consumers in Sarawak who receive higher electricity bill this month have been advised to take a snapshot of the actual consumption at their premises’ meter and share it with.
— Malay Mail

Daim: In Malaysia, when you steal Milo, you go to jail; but when you steal billions of ringgit, you walk away smiling
The anger and discontentment expressed by Malaysians over a recent decision by the Sessions Court to grant Riza Shahriz Abdul Aziz a discharge not amounting to an acquittal (DNAA) for five money-laundering charges is.
— Malay Mail

UMS student’s tree hut video goes viral
A video entitled “24 Hours On Tree Challenge” by Veveonah Mosibin, a Universiti Malaysia Sabah student, recently went viral as thousands of Malaysians are touched by her determination not to allow any obstacles stop her in her educational pursuit.
— The Borneo Post

IMM13 ‘most appropriate’ single document – Jeffrey
The use of IMM13 is the most appropriate single document to group all foreigners from the Philippines holding Kad Burung-Burung and Kad Banci and a very positive first step towards resolving the illegal immigrants problems in Sabah, said STAR Sabah president Datuk Dr Jeffrey Kitingan.
— The Borneo Post

Johor beauty salon ups eyebrow threading game amid Covid-19 pandemic
Increased awareness of hygiene to curb the spread of Covid-19 has driven one beautician in Kempas to work on an alternative way to continue the age-old practice of threading with a single cotton thread.
— Malay Mail

RM2m cheque via law firm was ‘sincere donation’ for Zahid’s tahfiz school, businessman claims in Umno leader’s trial
A businessman today claimed to have given a personal cheque of RM2 million to an Islamic religious school allegedly owned by his “good friend” Datuk Seri Ahmad Zahid Hamidi as a “sincere donation”.
— Malay Mail

Zahid’s trial: Blank cheques over RM1.3m given to mystery moneychanger in exchange for cash, witnesses say
Signed cheques that combined totalled over RM1.3 million were given to a moneychanger with the name of the recipient left blank, several prosecution witnesses testified today in the money-laundering trial of former deputy.
— Malay Mail

JPJ rakes in over RM3mil in bids for ‘SYG’ number plates in Sabah
The JPJ has netted over RM3mil in five days through bids for the “SYG” vehicle registration numbers, says director-general Datuk Seri Shaharuddin Khalid.
— The Star Online

JPJ: No action will be taken on two million Malaysians with expired road tax, driving licences until MCO is over
No action will be taken against the more than two million Malaysians whose driving licences and road tax have expired since the movement control order (MCO) was enforced, said Road Transport Department (JPJ) director-general Datuk Seri Shaharuddin Khalid.
— The Star Online

Tanah Hitam, Chemor planters facing eviction bid for Perak MB to intercede
Sixteen small-scale farmers from Kampung Baru Tanah Hitam, Chemor asked the Perak mentri besar for help today after they were notified to vacate the land they have been cultivating for years.
— Malay Mail

Make “Road To Oscar” a reality – Saifuddin
Films that revolve around the Malay world, culture and religions can bring the local film industry to greater heights including going to the Oscar, said Communications and Multimedia Minister Datuk Saifuddin Abdullah.
— The Borneo Post