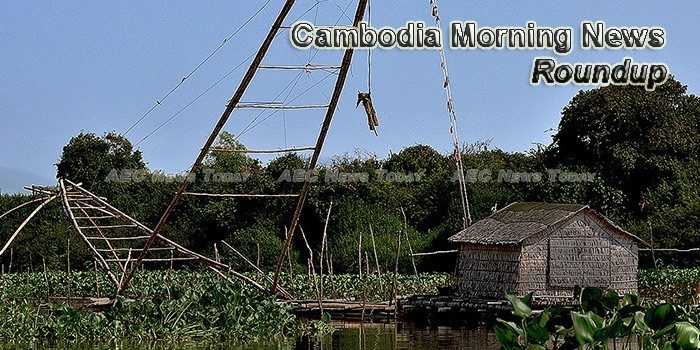 Watchdog Urges Caution For Would-Be Observers to Cambodia’s Election
An electoral watchdog in Cambodia has cautioned would-be international observers to think twice before accepting an invitation to participate in the country’s upcoming general ballot, which is expected to be neither free nor fair amid a ban on the main opposition party.
— Radio Free Asia

Election will go forward without NGO observers, official says
The upcoming national election on July 29 will take place as scheduled despite no officials from civil society being registered to monitor the process, a senior CPP official said yesterday.
— Khmer Times

Cambodia’s missing railway link to Thailand rebuilt after 45 years
A missing 48km stretch of railway that connects the capital Phnom Penh to the Thai border has been rebuilt, 45 years after it was destroyed in the 1970s during the Cambodian civil war.
— South China Morning Post

Telcoms revenue $30 million in 2017
The government collected about $29 million from posts and telecommunications and licensing fees last year, according to the latest report from the Ministry of Posts and Telecommunication.
— Khmer Times

Kingdom ‘needs $406M to be mine-free by 2025’
Cambodia reiterated on Wednesday, the International Day of Mining, that it needs $406 million to fund demining projects through 2025.
— The Phnom Penh Post

A sector too big to fail?
Cambodia’s garment sector is the backbone of the country’s export-driven economy and employs 86 percent of all factory workers.
— Khmer Times

Taiwanese shipping giant expands Cambodia operation
Taiwan’s largest shipping carrier announced it has opened an office in Cambodia and plans to expand its operations in the Kingdom, further connecting the country to global supply chains.
— The Phnom Penh Post

43 Cambodian Deportees to Depart from the U.S Tomorrow
At least 43 Cambodians in the United States will be deported on April 5, 2018, according to Keo Vanthan, Deputy Director General of the General Department of Immigration on Wednesday.
— Fresh News

Capital’s casino rolls high for Q1 revenue
NagaWORLD posted a 181 percent year-on-year increase in its gross gaming revenue during the first quarter of this year, continuing the hot streak of Phnom Penh’s only licensed casino.
— The Phnom Penh Post

Grassroots party lays out policy platform
The Grassroots Democratic Party has created a 125-point policy document outlining its priorities were it to be elected to office in the July national elections.
— The Phnom Penh Post

NGO Law Having Negative Impact on Freedoms of Assembly and Political Participation: Community Group
The head of a Cambodian community organization that promotes land ownership has complained of intimidation after attempting to visit farmers near the country’s border with Vietnam.
— VOA Cambodia

Turkey eyeing big trade boost
Cambodia and Turkey have pledged to boost trade between the countries to half a billion dollars by 2020.
— Khmer Times