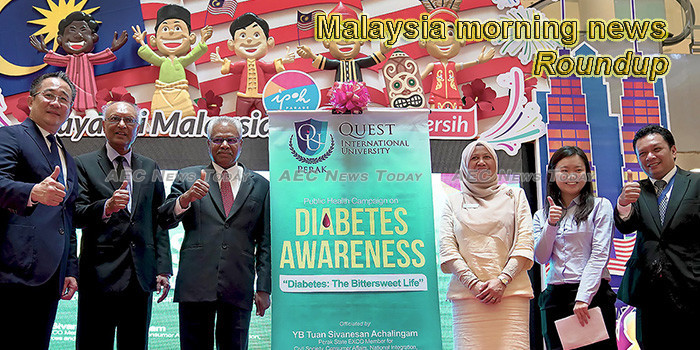 Downgrading can lead to negative perception of Malaysian carriers, says analyst
It may take a while before Malaysia regains its Category 1 rating by the US Federal Aviation Administration, says another expert.
— FMT News

Malaysia has right to revise raw water price to Singapore
Malaysia still has the right to revise the price of water supplied to Singapore, although the neighbouring country claims that the right no longer stands as no price revision was implemented from 1987 to 2012, the Dewan Rakyat was told today.
— The Edge Markets

Joint Military Exercise Puts Malaysia Defense Policy into Focus
The recent engagement highlighted some of the ongoing activity underway with respect to the Southeast Asian state’s defense policy.
— The Diplomat

Awang Tengah to Petronas: Why comply with foreign laws but reject Sarawak’s sales tax?
Petronas’ refusal to comply with Sarawak’s sales tax Law is tantamount to challenging the rights of the state as enshrined under the Federal and State Constitutions, the State Legislative Assembly was told.
— The Borneo Post

Global players remain drawn to Malaysia’s economy, strategic location — IQI chief economist
Malaysia will continue to be on the global investors’ radar due to its solid economic position and its importance in the Belt and Road Initiative (BRI), said IQI Global chief economist Shan Saeed.
— The Edge Markets

Lack of imagination holding Malaysia back, says former Bush aide
A prominent economist says Malaysia is capable of competing with China on the manufacturing front, but that it is being held back by “a lack of imagination”.
— FMT

Malaysian Pastor’s Vehicle Abduction Caught on Camera as Thousands Petition to Find Him
A pastor believed to have been abducted because he shared his Christian faith with Muslims in a country enforcing a strict Islamic code — and whose 2017 kidnapping was caught in chilling footage — is the subject of a new petition urging the Malaysian government to send Raymond Koh back to his family.
— Christan News

Will 4-day workweeks ever be possible in Malaysia?
Did you know that parts of Europe have adopted the 4-day workweek, and Microsoft Japan recently found that productivity increased by 40% by adopting it?
— The Rakyat Post

Human rights apply to all, EU tells Malaysia over Selangor Shariah ‘unnatural sex’ conviction
The European Union (EU) chided the Selangor Shariah High Court for sentencing five men for “attempting sex against the order of nature” last week, saying the punishments are a breach of their human rights.
— Malay Mail

Opposition may legally challenge EC’s ruling that Tg Piai campaigners are required to obtain permits to campaign
Opposition lawmakers are mulling to legally challenge the Election Commission’s (EC) ruling that mobile political campaigners for the Tanjung Piai parliamentary poll this Saturday (Nov 16) are required to obtain police permits for their walkabouts and even door-to-door visits.
— The Star Online

770ha for pineapple cultivation in inter-cropping project: Ministry
A total of 770ha of land have been cultivated with pineapple since the implementation in 2016 of the integrated pineapple project where pineapple is inter-cropped with oil palm and rubber, the Dewan Rakyat heard today.
— The Sun Daily

S’wak to meet federal govt over alleged ban on GPS lawmakers to enter schools
Sarawak to seek clarification from the federal government over the latter’s alleged instruction to bar Gabungan Parti Sarawak (GPS) lawmakers from attending events held in schools in the state.
— The Sun Daily

Magistrate finds DAP man guilty of molest, sentences him to three years jail
A former city councillor from DAP was today sentenced to be jailed three years and fined RM7,000 by a Magistrate’s Court here after being convicted of molesting a college student two years ago.
— Malay Mail

PJ community embraces zero waste-concept store
Although the concept of a store selling products with no packaging and has zero-waste is still new, it is not alien and is well-received by the local community in Petaling Jaya.
— The Sun Daily

Mothers abandoned by husbands can get relief from S’gor govt, says assemblyman
MOTHERS whose husbands have abandoned their family responsibilities can apply for state programmes designed for single mothers with documents to prove their claims
— The Star Online

Details of adoptive parents to be included in Sarawak’s adoptive child record of birth, next year
Starting January next year, details of adoptive parents and biological parents would be included in the Second Schedule Extract from the Central Register Record of Birth Sarawak of the Adoption (Central Registry) Regulations 1960, the State Assembly sitting was told, today.
— The Sun Daily

M40 group not left out in terms of medical assistance: Dzulkefly
The Government has never neglected the welfare of the M40 income group, including providing various medical-related assistance through the Ministry of Health (MoH), the Dewan Rakyat was told yesterday.
— The Sun Daily