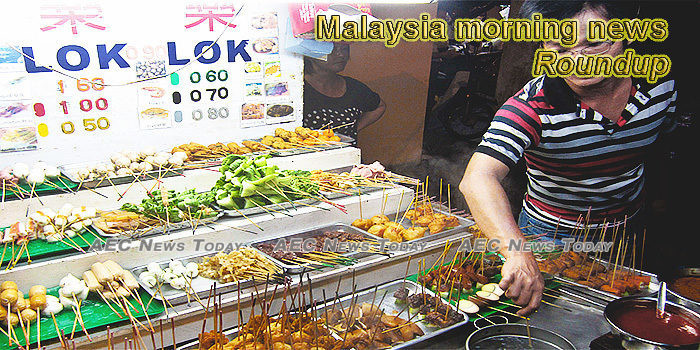 Why do onions cost most in Penang? Domestic Trade Ministry is on the case
The Domestic Trade and Consumer Affairs Ministry has instructed its enforcement team to investigate the pricing mechanism for onions at retailers in Penang.
— Malay Mail

Malaysia to play mediator role?
AWEEK into 2020 and we are already witnessing a possible war in the Middle East, between an unpredictable United States president and a defiant Iran leadership.
— New Straits Times

Another Rohingya held in Malaysia
An illegal Rohingya migrant fleeing a detention camp in Thailand has been arrested in Malaysia.
— Bangkok Post

Perodua launches 2020 Bezza, expects to sell 4k units per month
Perodua has launched the latest version of 2020 Bezza yesterday, with 4,000 units expected to be sold monthly on average.
— The Borneo Post

Tax structure review may be needed
A review of the tax rate might be necessary in order to provide the government with a more effective method of revenue collection, said Ernst & Young Tax Consultants Sdn Bhd Malaysia tax leader and business tax services leader Amarjeet Singh.
— The Sun Daily

Analyst warns of lynching risk if sex offender registry is accessible to all
The information in the National Sex Offender Registry is not meant to be publicly available, otherwise sex offenders will face repercussions beyond the court room, crime analyst Kamal Affandi Hashim (pix) said.
— The Sun Daily

Time for National Drug Policy to be reviewed: MCPF
It is time for the government to review the National Drug Policy (NDP) so that efforts to combat drug addiction and abuse can be done in an integrated manner, says Malaysian Crime Prevention Foundation (MCPF) vice-chairman Tan Sri Lee Lam Thye (pix).
— The Sun Daily

Replanting trees based on suitability
Kuching North City Commision (DBKU) is looking to replace unsuitable trees planted along the main roads in hopes of providing a safer driving experience for its citizens.
— New Sarawak Tribune

Sunway targets rm2 billion in sales
Sunway Property announced yesterday that it is targetting RM2 billion in sales this year while continuing to focus on delivering lifelong value to purchasers.
— New Sarawak Tribune

RAM: Negative business sentiment bottoming out
The negative sentiment among Malaysian businesses appears to have bottomed out, said RAM Ratings in releasing the latest RAM Business Confidence Index for Q1-Q2 2020.
— The Sun Daily

Top Glove: Nitrile segment to make up bulk of output by year-end
Top Glove Corp Bhd expects its total production of nitrile gloves to overtake natural rubber gloves by the end of this year, according to its executive chairman Tan Sri Lim Wee Chai (pix).
— The Sun Daily

Release of recordings raises question of prejudice in Najib’s case
Questions have been raised by lawyers and a former top brass police officer on whether the audio clips released to the public by the Malaysian Anti-Corruption Commission (MACC) yesterday were prejudicial to former prime minister Datuk Seri Najib Abdul Razak.
— The Sun Daily

DAP assemblyman claims trial to LTTE-linked charge
Seremban Jaya P. Gunasekaren pleaded not guilty in the High Court here today to a charge with giving support to the LTTE terrorist group at an event in Melaka two years ago.
— Malay Mail

Extraordinary People: Six world marathons and running
AFTER Maggie Kim Hong Goh gave birth to her second child at 34, she started to put on the pounds. S
— The Sun Daily

We will check recordings to decide on the classification of the case: IGP
Inspector-General of Police Tan Sri Abdul Hamid Bador (pix) said police will study the audio recordings allegedly involving several high-profile individuals before deciding on the next course of action.
— The Sun Daily