Indonesia morning news for May 4 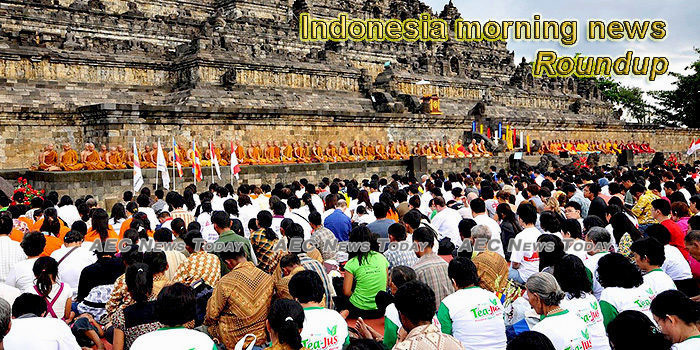 Indonesia’s Tokopedia probes alleged data leak of 91 mln users
Tokopedia, Indonesia’s largest e-commerce platform, said it was investigating an attempted hack and claims that the details of millions of its users had been leaked online.
— Nikkei Asian Review (paywall)

Indonesian journalists face job losses, pay cuts and obstruction during outbreak: LBH Pers
The COVID-19 outbreak may also threaten Indonesian journalists with unfair employment treatment and limitations placed on press freedom, the Legal Aid Institute for the Press (LBH Pers) said on Sunday, setting a tone for the annual World Press Freedom Day that is much bleaker than previous years.
— The Jakarta Post

Philippines and Indonesia face risk of record remittance fall
The coronavirus pandemic has already disrupted the lives of poor people in Southeast Asia, but it threatens to deal a further blow by cutting a vital source of income — remittances.
— Nikkei Asian Review

Indonesia Mass Produces Covid-19 Testing Kits
A consortium of Indonesian research agencies and companies began mass producing Covid-19 testing kits this week to cope with domestic shortage during the pandemic and meet the target of at least 10,000 diagnostic tets per day, a state official said on Sunday.
— Jakarta Globe

Achmad Yurianto Warns People of Dengue Fever
Director General of Disease Control and Mitigation of the Ministry of Health Achmad Yurianto urged the people to be aware of dengue fever.
— Tempo.co

Police Find Trucks Carrying Homecomers Despite Mudik Ban
Police have again found a number of trucks carrying homecoming travelers from Jakarta and its surrounding area despite a government ban on annual exodus (mudik) to celebrate Eid al-Fitr festivities in hometowns amid the COVID-19 pandemic.
— Tempo.co

Indonesia Records More Recoveries from COVID-19 until May 2
The Indonesian Government’s COVID-19 Task Force confirmed that as of Saturday, 1,665 of the 10,843 new coronavirus patients in the country had fully recovered from the deadly disease and received discharge from hospitals.
— Tempo.co

Orangutans among thousands of animals at risk of starvation in Indonesian zoos under coronavirus lockdown, officials warn
A survey released by the Indonesian Zoo Association concluded that 92 per cent of its member zoos on the islands of Java, Bali, Sumatra, Lombok and Borneo had only enough supplies to feed their animals until mid-May.
— ABC News

Homecoming Ban, Police Caught 8,709 Vehicles
Traffic Director of Metro Jaya Police Sr. Comr. Sambodo Purnomo Yogo said the Police has turnover 8,709 vehicles in relation to the implementation of the homecoming ban from April 42 to May 1, 2020.
— Tempo.co

Indonesia’s Rupiah hits 15,000 per US dollar earlier than expected
Following the fluctuating rupiah in the past several days, the Indonesian currency eventually reached its highest value in April 2020, when its rate was previously recorded in the range between 15,430 and 15,295 against US dollar.
— The Star

Indonesia Quarantines Over 500 Philip Morris Factory Workers
Authorities in the Indonesian city of Surabaya have ordered more than 500 factory workers employed by tobacco giant Philip Morris to self-isolate after two of their colleagues died from coronavirus, as the country struggles to slow the spread of the infectious illness.
— Jakarta Globe

Indonesia Reports Over 650 Covid-19 Cases Abroad
The number of Indonesians abroad who gets infected Covid-19 rose to 654 people, a jump by more than a third from two weeks ago, spreading across 31 countries, the Foreign Affairs Ministry said on Friday.
— Jakarta Globe

PLN to give small businesses free electricity for six months
State-owned electricity firm PLN has announced its intention to supply small-scale businesses and industries on 450-volt ampere (VA) contracts with six months of free electricity as part of the government’s latest expansion of social aid.
— The Jakarta Post from Frankfurt Airport on Saturday (May 2).
— Tempo.co

Only 1.6 Percent Aid Misdistribution, Anies Baswedan Says
Jakarta Governor Anies Baswedan said that only 1.6 percent out of 1.2 million social aid were misdistributed during the implementation of the Large-Scale Social Restriction (PSBB) in the capital.
— Tempo.co

Thousands rebuked, 16 face trial for violating PSBB in Pekanbaru
At least 16 people have undergone speedy trials and been fined for committing “intolerable mistakes” during the implementation of large-scale social restrictions (PSBB) in Pekanbaru, while thousands of others have been reprimanded for violating the policy that aims to cut the transmission chain of COVID-19.
— The Jakarta Post

How COVID-19 will dampen Indonesia’s infrastructure developments
The Indonesian economy is plagued by a range of “infrastructure gaps”, places where much-needed physical and digital infrastructure is either substandard or absent, mostly due to under-investment.
— The Jakarta Post

Pandemic Shows Little Sign of Slowing as Indonesians Try to Avoid Restrictions
Indonesia has reported an additional 292 Covid-19 cases and 422 suspect patients throughout the archipelago in the past 24 hours, showing little sign of the pandemic slowing in the country amid many attempts among its residents to break government-imposed travel restriction.
— Jakarta Globe

Ministry Wants Tourism Sector as Priority for Pre-Worker Card
Tourism and Creative Economy Minister Wishnutama Kusubandio asserted that workers in the tourism sector who were affected by severance as a result of the Covid-19 pandemic should be prioritized to receive the Pre-Employment Card.
— Tempo.co

Embassy facilitates return of 98 migrant workers from Brunei
The Indonesian Embassy in Bandar Seri Begawan, Brunei Darussalam, facilitated the return of 98 Indonesian workers back home in the wake of the country having suspended several international flights to stem the spread of COVID-19.
— Antara News

COVID-19 pandemic in Pekanbaru forecast to end in mid-June 2020
The Pekanbaru city government has estimated that the novel coronavirus disease (COVID-19) outbreak in the capital of Riau Province will end in mid-June on the basis of the results of the COVID-19 analysis team’s study.
— Antara News

Indonesian zoos launch ‘Food for Animals’ fundraiser as pandemic devours revenue
The Indonesian Zoo Association (PKBSI) has launched an online fundraiser asking members of the public to help feed thousands of animals in captivity across the country as zoo revenue all but disappears during the COVID-19 pandemic.
— The Jakarta Post

Businesses must have adequate support to prevent layoffs: Experts
As COVID-19 arrests most industry activity and disrupts global supply chains, millions of Indonesian laborers face a greater risk of being furloughed or losing their jobs entirely.
— The Jakarta Post

Costly, dirty and unfair: Indonesia at crossroads in embracing incinerators
Fifteen years have passed since an avalanche of waste at Leuwigajah landfill in Cimahi, West Java, killed at least 147 people—a tragedy that was not unheard of in Indonesia, a country that produces 64 million tons of waste annually.
— The Jakarta Post

‘Someone influential’: Novel Baswedan tells court he has name of person behind his attack
Corruption Eradication Commission (KPK) senior investigator Novel Baswedan told the North Jakarta District Court on Thursday that he had received a tip-off from a high-ranking police officer regarding the alleged mastermind behind an acid attack against him in 2017.
— The Jakarta Post

Indonesia’s Forgotten Amidst The PandemicAustralian expats in Indonesia say they have ‘moral obligation’ to give back during coronavirus pandemic
When borders started closing between Australia and Indonesia to contain the spread of coronavirus, Amanda Rialdi’s family and friends kept telling her to come back to Australia.
— ABC News

Indonesian Women Were Already at Risk. Then COVID-19 Came.
Proposed laws, plus the added isolation and stress of the pandemic, could worsen the situation for Indonesian women already facing abuse and discrimination.
— The Diplomat

Solidarity crucial as corona crisis looms over world of work
This year, with communities across the globe battling the coronavirus pandemic, the International Labour Day is being commemorated differently.
— Antara News

Fight against illegal logging could be cut back by mobility restrictions: NGO
Forest rangers on patrol in Gowa, South Sulawesi, knew something was amiss when they noticed a man in his mid-50s loading two-meter-long logs onto a yellow truck in a protected forest.
— The Jakarta Post

Indonesia should have National Education Blueprint in Place: PGRI
The government is expected to draft the country’s national education blueprint to prepare Indonesians to be at par with global community members, according to Indonesian Teachers Association (PGRI) Chairperson Professor Unifah Rosyidi.
— Tempo.co

Police to Probe Motive Behind Perpetrator Planting Bomb in Mosque
The Central Kalimantan Police will conduct an investigation to uncover the motive behind HG, alias Iwan, 22, planting a homemade bomb in the premises of Nurul Yaqin Mosque in Kuala Pembuang, Seruyan District, Central Kalimantan.
— Tempo.co

Ruangguru tutor demands removal of her course from preemployment card program
A television journalist and tutor at homegrown online tutoring platform Ruangguru has called on Skill Academy, the platform’s subsidiary, which has partnered with the government over the latter’s preemployment card program, to remove her journalism course from the program.
— The Jakarta Post

PT Freeport Provides Isolation Location for Employees
As many as 51 employees of PT Freeport Indonesia in Tembagapura have been recorded positive with coronavirus or Covid-19 infection.
— Tempo.co

‘Corona’ baby: Newborn girl in West Java named after pandemic
A couple in Cianjur, West Java, have named their newborn baby “Corona” after the coronavirus.
— The Jakarta Post