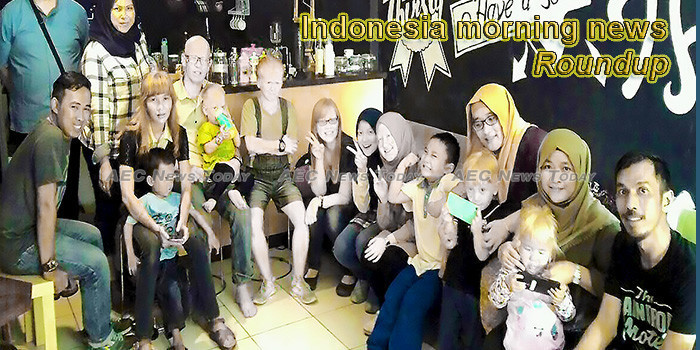 Democracy shields Indonesia from Belt and Road fallout
Beware the debt trap. Chinese workers are invading us. We are losing our sovereignty.These are some of the warnings that have emerged in the past month after Indonesia announced that it would go after the billions of dollars offered under China’s Belt and Road Initiatives (BRI) to finance the government’s ambitious massive infrastructure program.
— The Jakarta Post

Nearly half a million motorists return to Jakarta after Idul Fitri
The streets of Jakarta, empty during Idul Fitri, will soon return to normal, with all the honks and traffic jams, with almost half a million cars having returned to Jakarta since Friday, according to state-owned toll operator PT Jasa Marga.
— The Jakarta Post

Hitman in Assassination Plot on Indonesian Officials Confesses
Iwan Kurniawan, one of the suspects apprehended in the assassination plot on four Indonesian State Officials, confessed that he was surprised when he was initially informed of the target he had to assassinate.
— Tempo.co

Tourist deaths caused by lack of safety standards: BPBD
A local disaster mitigation agency officer in Bangka Belitung Islands blamed the managements of tourist destinations for the death of at least three tourists in different locations across the province, as the latter were deemed to not comply with safety standards in providing services.
— The Jakarta Post

Indonesia ‘is no longer a model Islamic nation’
F INDONESIA continues to descend into religious intolerance, the world will lose “an important potential force for good in the Muslim-majority world”, Christian Solidarity Worldwide (CSW) warned this week.
— Intellasia

Floods, landslides kill 1, forces over 2,000 to flee homes in central Indonesia
One villager was killed and more than 2,000 others have been taking shelters at higher grounds after floods and landslides hit West Kalimantan province of central Indonesia since Friday, a disaster agency official said on Sunday.
— Xinhua.net

Chinese authorities seize over 500 tonnes of banned solid waste from Malaysia, Indonesia
Ningbo customs in east China’s Zhejiang province has seized a total of 523.7 tonnes of illegal solid waste, according to a statement by the General Administration of Customs.
— The Straits Times (annoying popups)

Prabowo Coalition Shows Democrats the Door After Disbandment Suggestion
The coalition of losing presidential candidate Prabowo Subianto has shown the Democratic Party the door after comments by a senior party official on the future of the coalition.
— Jakarta Globe

Law expert cautions govt over open skies plan
A University of Indonesia (UI) international law expert has cautioned the government over its plan to invite foreign airlines to serve domestic routes in an attempt to push down airfares in the country.
— Intellasia

Pimco likes China and Indonesia bonds, turns away from India
Pacific Investment Management Co is turning away from Indian bonds in favour of Chinese and Indonesian debt, saying their valuations have become more attractive and slower growth will spur policy easing.
— Gulf Times

Idul Fitri sea accidents: Three boats sink in bad weather
The National Search and Rescue Agency (Basarnas) was, as of June 7, still looking for 17 crew members of the KM Lintas Timur, a ship that sank on Saturday in the Banggai Sea off Central Sulawesi.
— The Jakarta Post

Hindus hit the road with Muslims in Lombok to celebrate Idul Fitri
For the first time ever in West Lombok, West Nusa Tenggara (NTB), local Hindus took part in celebrating Idul Fitri, taking to the streets with thousands of Muslims from Narmada subdistrict on Tuesday evening for takbiran (recitation of “Allah is great” on the …
— Intellasia

Focus Issue: Switching to renewable energies a must in combating climate change
Go with the flow: The Serayu River which originates in Banjarnegara, Central Java, flows to Cilacap regency, covering about 180 kilometers.
— The Jakarta Post

The big problem with the so-called ‘digital nomad’ life in Bali
In 1997, Australian entrepreneur Tony Smith stumbled upon an Internet cafe in Bali where he saw expats working on their laptops.
— news.com.au

Thousand Islands welcomes more visitors over Lebaran
Thousands have flocked to the Thousand Islands in the northern part of the capital city over Idul Fitri.
— The Jakarta Post