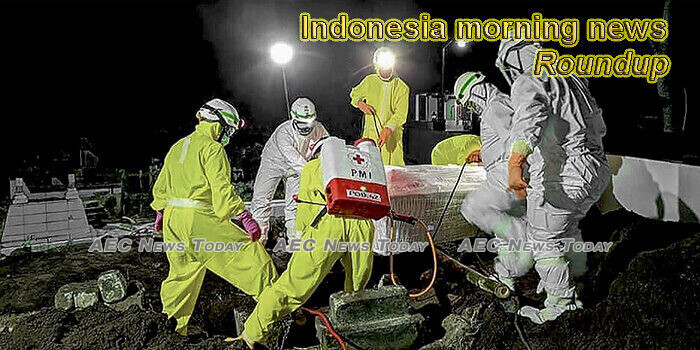 Indonesia’s inflation falls to 20-year low as consumer spending weakens
Indonesia recorded the lowest annual inflation rate since 2000 in June, slightly below the central bank’s target range, as the coronavirus pandemic upends business activity and demand for goods and services.
— The Jakarta Post

NTT vows to abolish bride ‘kidnapping’ after nationwide public anger
The administration of East Nusa Tenggara (NTT) has vowed to abolish the practice of kawin tangkap (capture and wed), a form of bride kidnapping commonly practiced on the island of Sumba, after a viral video of an such an event angered a Cabinet minister and the public nationwide.
— The Jakarta Post

More Indonesian children may become malnourished amid pandemic, UNICEF warns
The number of children suffering from malnutrition could spike in Indonesia as the government has struggled to stem the impact of the COVID-19 pandemic on the health issue, according to the United Nations International Children’s Fund.
— The Jakarta Post

Superspreaders Dictate Covid-19’s Transmission in Indonesia
A recent paper by Indonesian scientists has pointed to the oversized role of a few highly contagious individuals in the Covid-19’s transmission in the country, partly explaining how the world’s fourth most populous country fared better than its peers like India, Brazil and the United States.
— Jakarta Globe

Jakarta Extends ‘Transition Period’ to July 16 before Full Reopening
Governor Anies Baswedan announced on Wednesday the so-called transition period that followed social restriction measures amid the Covid-19 outbreak will be extended to another two weeks as daily infection cases have mostly returned to three-digit figure throughout June.
— Jakarta Globe

Pandemic-fuelled baby boom has many Indonesians worried
With her husband left jobless by the pandemic, the last thing Indonesian mother Juarsih needed was to get pregnant, but now she’s expecting a third child — one of many in the country anxiously preparing for a COVID-fuelled baby boom.
— The Jakarta Post

Indonesia strikes a blow against judicial graft
If there is ever a potentially lucrative position in Indonesia’s judicial system, it is secretary of the Supreme Court, the presidentially-appointed bureaucrat who controls the administration and, most importantly, the transfers and promotions of lower court judges.
— Asia Times

Air Travel Suffers Steepest Fall Due to Pandemic
Air travel business suffered the steepest fall in decades as the Covid-19 pandemic forced flight operators to ground planes amid travel restrictions and lockdown in most countries around the world.
— Jakarta Globe

Indonesia draws the line on Singapore’s 2015 haze investigation
Indonesia will respect Singapore’s investigation into individuals and companies implicated in the 2015 peatland and forest fires, on the condition that the investigation does not violate Indonesian sovereignty or international law.
— The Jakarta Post

Indonesia reopens national parks to tourists as COVID-19 cases rise
Indonesia is reopening dozens of conservation areas to local and foreign tourists after months of closure, even as the number of COVID-19 infections in the country continues to climb.
— Mongabay

Experts warn against complacency as foreign companies plan relocation to Indonesia
Business associations and experts have welcomed the government’s announcement on the relocation of foreign-owned production facilities to Indonesia, a positive sign for the slowing economy amid the pandemic.
— The Jakarta Post

Jakarta Asked to Issue Ban on Production of Plastic Bags
The Indonesian Shopping Center Association (APPBI) urged the Jakarta provincial administration to issue a gubernatorial regulation or Pergub on the prohibition of plastic bag production.
— Tempo.co

Govt to slash diesel subsidy 50%, generate trillions in 2021 savings
House of Representatives (DPR) Commission VII overseeing energy on Monday approved a proposal from the Energy and Mineral Resources Ministry to cut the diesel subsidy by 50 percent to Rp 500 (3.5 US cents) per liter, on the back of expectations that crude prices will remain low in the aftermath of the COVID-19 pandemic.
— The Jakarta Post

Indonesia Welcomes $38b Factories Relocation From China to C. Java
Seven companies from Japan, South Korea, Taiwan, and the United States set to begin plant construction at Batang industrial estate in Central Java with a total investment of $850 million, as Indonesia finally reap some benefit from multinational companies relocation from China.
— Jakarta Globe

Sexual Violence Elimination Bill to be Dropped from 2020 Priority
The House of Representatives Legislation Body (Baleg DPR) planned to drop the bill on the elimination of sexual violence or RUU PKS from the 2020 national legislation program.
— Tempo.co

Police Ordered to Get Tough on Covid-19 Fund Misuse
President Joko “Jokowi” Widodo has told the National Police to ‘bite off’ any government official with the slightest intent for misusing the Covid-19 fund.
— Jakarta Globe

BMKG: West Sumatra Sianok Segment May Trigger Strong Earthquake
The Sianok segment, an active cesarean located in West Sumatra, reportedly has the potential to trigger powerful earthquakes that must be aware of as it may recur in the future.
— Tempo.co

Minister Yasonna claims no trace of Djoko Tjandra in immigration system
Contradicting claims made by the Attorney General’s Office (AGO), Law and Human Rights Minister Yasonna Laoly has said there was no indication that Djoko Soegiarto Tjandra, a longtime fugitive in the high-profile Bank Bali corruption case, has returned to the country.
— The Jakarta Post

As Prabowo visits Russia again, little headway on Sukhoi
Defense Minister Prabowo Subianto’s recent visit to Russia to attend the Victory Day military parade highlighted the depth of cooperation in the defense sector between the two countries despite the absence of progress in Indonesia’s plan to procure Russian Sukhoi jet fighters, defense analysts have said.
— The Jakarta Post

53 percent of Indonesians say obtaining SME permit is hard: SMRC survey
Indonesians are finding it hard to secure business permits, especially for small and medium enterprises (SME), with a recent survey showing that the country is lagging behind its regional peers in improving ease of doing business.
— The Jakarta Post