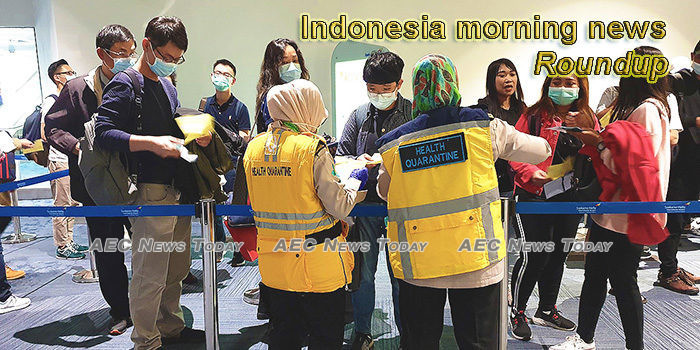 Forty specimens tested negative for Wuhan coronavirus: Ministry
The Health Ministry revealed Wednesday that 40 specimens of individuals being monitored for the novel coronavirus have tested negative, while two others are still under observation.
— The Jakarta Post

This week’s tax updates: Treaty with Singapore, omnibus bill submission
The government is amplifying tax collection efforts by submitting an omnibus bill on taxation to the House of Representatives this week as well as signing a double-tax avoidance agreement with Singapore.
— The Jakarta Post

Angkasa Pura I suspends 158 flights to and from China
Indonesia’s airport operator PT Angkasa Pura (AP) I temporarily suspended 158 flights from and to China from Wednesday, (Feb 5), in accordance with the government’s policy to thwart the entry of coronavirus into the country.
— Antara News

State Commission Blocks Plan for Formula E Track Inside Monas Park
A multi-ministerial commission responsible for overseeing the development of the National Monument, or Monas, in Central Jakarta, has blocked the city’s plan to hold a Formula E electric car race inside the park, fearing the race would cause irreparable damage to its historic square.
— Jakarta Globe

Strong earthquake rocks Indonesian island of Miangas
A 6.1-magnitude earthquake jolted the Indonesian Island of Miangas in North Sulawesi Province on Thursday at 08.40 p.m. local time, prompting many residents to rush out of their homes in search of safety.
— Antara News

Govt in Search of Island to Treat Infectious Disease Outbreaks
Coordinating Minister of Politics, Law, and Human Rights Mahfud MD said the government is in search of an island that would later be used to establish a hospital to accommodate patients with infectious diseases.
— Tempo.co

‘It’s safe to eat pork’: Bali launches campaign against swine fever outbreak with delicacies
The Bali administration is set to present mouth-watering pork dishes in an event held on Friday as part of its campaign to assure residents and tourists that it is safe to consume pork in the province, which recently saw the deaths of nearly 900 pigs as a result of an African swine fever (ASF) outbreak.
— The Jakarta Post

Indonesia temporarily halts live animal cargoes from China, the rest business as usual
Indonesia plans to temporarily halt cargoes of live animals from China to prevent the Wuhan coronavirus from entering the country, but will continue to receive other shipments of goods — via both air and sea — as usual.
— The Jakarta Post

Indonesia sees gloomy outlook on economy as growth falls below 5%
Indonesia’s economy headed into 2020 with sluggish outlook as household consumption, exports and investment are expected to further weaken due to global economic risks including the coronavirus crisis, economists say.
— The Jakarta Post

Bali refuses entry to 15 foreigners recently traveled to China
The Bali Immigration Office has barred entry to foreign tourists from various countries into Indonesia through the I Gusti Ngurah Rai Airport, as they reportedly traveled to China in the past 14 days.
— Antara News

Garlic prices soar in Central Java as coronavirus hampers imports from China
The coronavirus outbreak originating in the Chinese city of Wuhan has affected imports of garlic from China, causing the commodity’s prices to rocket by more than 40 percent as stocks plummet in Central Java.
— The Jakarta Post

Indonesia, FAO Work Together to End Hunger
Statistics Indonesia and the Ministry of Agriculture, with support from The Food and Agriculture Organization of the United Nations (FAO), worked together towards an integrated approach to agriculture and food security statistics to reach Sustainable Development Goals (SDG) in Indonesia, particularly “Goal 2 aimed to End Hunger.”
— Tempo.co

Indonesia to join global quest for digital tax unity
Finance Minister Sri Mulyani Indrawati said on Wednesday that the omnibus bill would contain a mechanism to ensure that digital companies fulfilled their tax obligations without changing existing tax provisions, such as a new requirement on value-added tax.
— The Jakarta Post

Government continues to monitor students’ condition in Hubei
Indonesia has steadily monitored the health of its three students declared unfit to fly when the government was set to airlift 245 Indonesians from the Chinese province of Hubei on the weekend.
— Antara News

Makassar customs authorities remain vigilant of imported Chinese goods
Customs authorities in the South Sulawesi provincial capital of Makassar have maintained close and constant vigil over the imports of goods from China on account of the coronavirus outbreak.
— Antara News

No Indonesian Victim in Istanbul Pegasus Airlines Incident: KBRI
The Indonesian Embassy in Turkey has confirmed that no Indonesian citizen falling victim in the accident of Pegasus airlines plane 2193 that skidded off the runway at Sabiha Gokcen Airport, Istanbul on Wednesday, February 5.
— Tempo.co

Coronavirus scare takes toll on North Sulawesi tourism
Concerns over the coronavirus outbreak have begun to take a toll on tourism in North Sulawesi – a popular destination for Chinese visitors – as the province reported declining international tourist numbers in the past week.
— The Jakarta Post

Residents reject Bengkulu power plant after turtles die
Residents of Baai Island in Bengkulu and environmental groups continue to push the government to halt the operation of a controversial Sepang Bay coal-fired power plant, saying it has diminished biodiversity in the area.
— The Jakarta Post

Polri: We Have Sent Letter Canceling Dismissal of Rossa to KPK
The police force has stated that they had given a letter canceling the withdrawal of Commissioner Rossa Purbo Bekti to the Corruption Eradication Commission (KPK).
— Tempo.co

Jiwasraya victims tour financial authorities’ offices demanding restitution
Ida Tumota, 60, had only one goal when she walked in the Finance Ministry on Thursday: to get her money back.
— The Jakarta Post

Indonesia yet undecided on repatriating ex-foreign ISIS fighters
President Joko Widodo (Jokowi) hinted at uncertainty over repatriation of some 600 ex-members of the legion of foreign ISIS fighters from Indonesia, pending the government’s evaluation of pros and cons of bringing them home.
— Antara News

Guaranteeing Investment, Luhut: Come to Me If There Are Problems
Coordinating Minister for Maritime Affairs and Investments Luhut Binsar Panjaitan is optimistic that the Employment Creation Law is set to increase investor interest in Indonesia.
— Tempo.co

Harun Case Investigator Dismissed, ICW: Firli’s Authoritarian Era
The Indonesia Corruption Watch (ICW) accused the Chairman of the Corruption Eradication Commission (KPK) Firli Bahuri as being authoritarian in leading the KPK, as apparent in the polemic regarding the dismissal of investigator, Commissioner Rossa Purbo Bekti.
— Tempo.co

Power and legal immunity: Alleged rape at Jombang boarding school
A rape case allegedly involving the son of a prominent Muslim cleric in Jombang, East Java, has advanced into a new phase with the Shiddiqiyyah Islamic boarding school, which was founded by the suspect’s father, resisting the legal process.
— The Jakarta Post

40 Couples Fall Victim to Pandamanda WO Scam: Depok Police
Depok Police Chief Sr. Comr. Azis Andriansyah said that at least 40 couples might have to cancel their wedding party with the service of Depok-based wedding organizer (WO) named Pandamanda following the police report of fraud against the planner.
— Tempo.co

In vino veritas: Bali governor issues new decree to promote traditional liquor
Bali Governor Wayan Koster has issued a gubernatorial decree regulating the province’s traditional liquors in a bid to preserve and promote the drinks in the region.
— Tempo.co