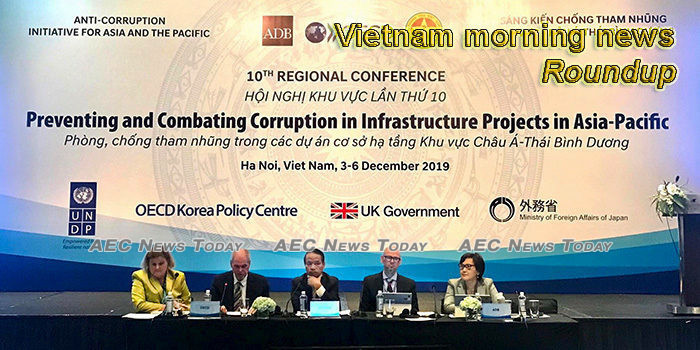 As World Shifts Away from Meat, Pork Shortage Worries Vietnam
Vietnam is being hit by a pork shortage, brought on by the scourge of swine fever and the U.S.-Chinese trade war, just before Tet, the Lunar New Year — a holiday in which pork plays a key role — approaches.
— VOA

80% of online public services in Hanoi available at advanced stages
Administrative reform has been a breakthrough for Hanoi in fulfilling socio-economic development targets.
— The Hanoitimes

Despite overall optimism, health remains top concern of Vietnamese consumers
It’s understandable that Vietnamese are increasingly concerned about health issues as air and water pollution has become palpable in large cities.
— The Hanoitimes

Vietnam stresses settlement of maritime disputes by peaceful measures
Pham Hai Anh, Vietnam’s representative to the United Nations, on December 10 affirmed Vietnam’s consistent stance that all disputes should be settled via peaceful measures, in line with international law, including the UN Convention on the Law of the Sea (UNCLOS).
— NDO

Vietnam strides forward in human development index growth
Vietnam is among the top 20 countries in terms of Human Development Index (HDI) growth from 1990 to 2018, a new report says.
— VnExpress

Vietnam’s new vehicle sales decline in November
New vehicle sales in Vietnam declined by 2.7% to 27,989 units in November 2019 from 29,709 units in the same month of last year, according to wholesale data released by the Vietnam Automotive Manufacturers Association (VAMA).
— Vietnam Insider

Creating environment for developing digital products and services
Innovation and creation are strategic and decisive factors for Việt Nam’s success of digital economic transformation. That was the message from Deputy Minister of Information and Communications Phạm Hong Hải at the Internet Day 2019.
— Viet Nam News

After Samsung shifts operation to Vietnam, Chinese city turns into ghost town
Huizhou city on the north of China’s flourishing Pearl River Delta has turned into a ghost town after Samsung closed its three-decade old factory and shifted operations to Vietnam and India in October, in the first visible fallout of the ongoing trade war between China and the US. India Times reports.
— Vietnam Insider

Vietnamese, Chongqing firms seek for business opportunities
A meeting for businesses from Việt Nam and China’s Chongqing Province was held in Hà Nội on December 10 to discuss investment opportunities and seek for partners in many fields.
— Viet Nam News

Vĩnh Phúc emerges as an attractive investment destination
Located close to Hà Nội, Vĩnh Phúc has to date attracted 752 domestically-invested projects with a total registered capital of more than VNĐ78 trillion (US$3.34 billion). It has also lured 378 foreign-financed projects worth more than $5 billion.
— Viet Nam News

Bank stocks push market up
Shares managed to increase on Wednesday thanks to the growth of banking stocks.
— Viet Nam News

Đắk Lắk Province prepares goods for Tết, worth $11.2m
The department has been implementing the price stabilisation programme between December 1, 2019 and February 15, 2020 in a move to ensure the good supply and avoid shortages of goods.
— Viet Nam News

Hanoi-based Activist Wins Rights Award for Her Support of Political Prisoners
A Vietnamese human rights activist living in Hanoi has won an award given by the U.S.-based opposition party Viet Tan for her work supporting the families of prisoners of conscience jailed by the one-party communist state, Viet Tan said in a statement this week.
— Radio free Asia

Vietnam boosts mattress import market share to 35% in October
Vietnam was the top mattress importer in October, with 266,765 units, good for a 35% share of the market, up seven percentage points from September, an industry report says.
— Furniture Today

Qatar and Vietnam to sign agreement on transnational crimes
The State of Qatar and the Socialist Republic of Vietnam have signed, in Doha, yesterday, the work minutes of implementation of the joint cooperation agreement on preventing and combating transnational crimes, which also included a number of other aspects of cooperation in the security fields and issues related to strengthening security cooperation.
— The Peninsula Qatar