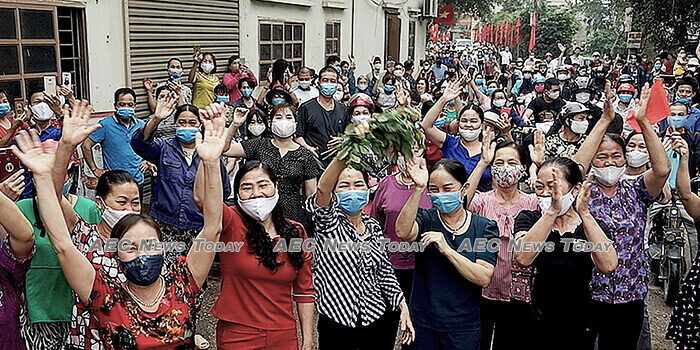 While many countries are struggling with the COVID-19 pandemic, May 11, 2020 marked the end of the ‘longest New Year (Tet) holiday ever’ for students in Vietnam. When the nationwide lockdown was lifted, Vietnamese students at all levels returned to school. Shops and restaurants reopened, and local markets were busy again.

Despite sharing an almost 1500-kilometre long (about 932 mile) border with China and being just 1900 kilometres (1,180 miles) from the Chinese city of Wuhan, where COVID-19 was first identified, Vietnam’s pandemic response has been one of the most successful interventions so far.

While these are reasonable points, other crucial factors are missing from this discussion, including how the government mobilised nationalism, heroism and the role of media to combat the virus. These factors helped make Vietnam’s response to the coronavirus low-cost but effective.

The Vietnamese government has mobilised nationalism through the use of patriotic language from the beginning of the coronavirus outbreak.

Echoing a history of thousands of years fighting and defeating foreign invasions, ‘fighting the epidemic is like fighting the enemy’ and ‘everyone is a soldier’ quickly became the main discourse in Vietnam’s response to COVID-19. This meant that following government appeals not only protected individuals themselves, but was also a matter of national pride.

Nationalism has also been mobilised by evoking community spirit. In recent months, the term ‘fellow citizenship’ (dong bao) has been used frequently in speeches, media coverage and social media.

A common slogan during the 15-day nationwide social distancing campaign was ‘If you love your country and love your fellow citizens, please stay where you are’.

Another motto repeated by government officials has been ‘We do not leave anyone behind’. This was the message sent to Vietnamese people overseas who wished to return to Vietnam.

Aviation authorities organised flights to ‘rescue’ Vietnamese citizens stuck in foreign countries ravaged by the COVID-19 pandemic. The Vietnamese government has also announced it will pay for all healthcare bills and spending of Vietnamese people presenting with symptoms of COVID-19, as well as those who spend 14 days in quarantine.

Heroism was another crucial factor used to mobilise the Vietnamese people in the fight against the coronavirus.

The legacy of the Vietnam War is still strong and soldiers are considered to be the true manifestation of heroes. Those who make remarkable contributions to the community are given the title ‘soldier of emulation’ (chien si thi dua).

The COVID-19 pandemic has prompted the emergence of new kinds of soldiers. Doctors, nurses and volunteers — as well as military soldiers — have all been depicted as frontline heroes.

This was illustrated by the sketch notes of a student in a quarantined zone depicting how doctors and soldiers were caring for patients went viral on the internet.

The internet and government-run social media platforms have also played a critical role in Vietnam’s war on COVID-19. Official government websites and hotlines, Facebook, Instagram, smartphone apps and text messages have all been utilised in every aspect of Vietnam’s COVID-19 response.

The Vietnamese government has used the internet and social media to provide health information, advice, and maps of infected areas.

Social media has become a pivotal channel connecting people to the authorities and has helped the government in surveilling and reporting suspected cases. This phenomenon is referred to as the ‘rice-powered camera system’ (he thong camera chay bang com).

Nationalism, heroism and governmental social media has helped to engage local people, speed up the process of contact tracing, and limit lockdowns to areas suspected of an outbreak. Public adherence to social distancing measures have reduced community transmission.

As of May 16 donations from organisations and individuals in Vietnam and overseas to the Vietnam Fatherland Front to support the fight against COVID-19 had topped $85.6 million.

Other positive initiatives include the invention of a ‘rice ATM’, charity activities, the use of robots in medical isolation facilities, and free meals and drinks for medical staff.

More importantly, nationalism has been channelled into reviving the economy following the lifting of the nationwide lockdown.

A new program called ‘Vietnamese people travel Vietnam’, issued by the Ministry of Culture, Sports and Tourism, is expected to bring the tourism sector back to its pre-COVID-19 trajectory.

There are shortcomings in Vietnam’s battle against COVID-19, such as overzealous nationalism and negative public reactions to the decision to bring overseas Vietnamese people home.

But despite these drawbacks, there is no doubt that the government has successfully harnessed nationalism, heroism and the media to contain the spread of the virus.

The COVID-19 pandemic is certainly an unwanted incident. But for the Communist Party of Vietnam (CPV) it has also presented a chance to gain domestic support and strengthen its legitimacy.

This article was written by  Lena Le is a Lecturer at the Faculty of International Studies, University of Social Sciences and Humanities, Vietnam National University, Hanoi (VNU-USSH). It first appeared on East Asia Forum under a Creative Commons License and is reproduced here with its permission.

Healthy oceans: keeping our health, the economy, and our lives above the waves