COVID-19 in Asean: update for May 31 — active cases fall in Asean as Brazil continues march up death tally table 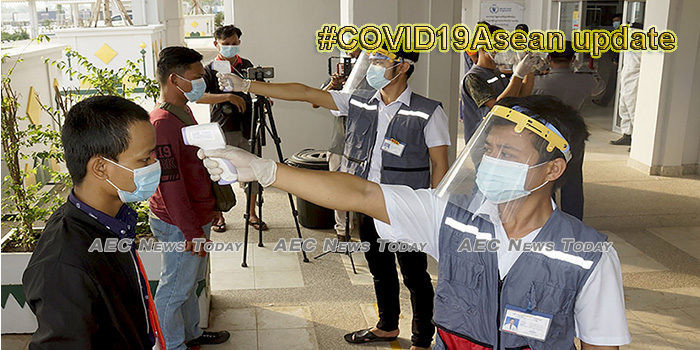 Indonesia yesterday again recorded the most number of deaths throughout the region with 53 fatalities taking the number of deaths there to 1,573, while 557 new infections pushed the active caseload to 17,185. Following treatment 523 people were discharged.

In the Philippines eight fatalities pushed COVID-19 deaths there to 950, while 590 fresh infections saw the active caseload jump to 12,466, of which 56 are considered serious or critical. Following treatment 88 people went home.

In Singapore yesterday the number of active cases** fell for the 16th consecutive day on the back of 506 new infections and 1,096 discharges to 13,616, of which seven are regarded as serious or critical.

Meanwhile, the combination of 30 fresh cases and 95 discharges yesterday saw the active caseload in Malaysia edge down to 1,317, of which nine are said to be serious or critical.

In Thailand yesterday one new case amongst returnees and 16 recoveries saw active cases drop to 59, all of whom are said to be in a serious or critical condition, while 17 new cases in Myanmar saw the active caseload there jump to 88.

There was no change reported in Brunei or Lao PDR, with the latter recording its 48th day without a new COVID-19 case.

Since the first Asean case of COVID-19 was identified in Thailand on January 12 there has been 89,039 confirmed cases recorded in Asean member countries with 41,527 people, or about 46.64 per cent, of all infections having been treated and discharged.

In the past 24-hours the number of COVID-19 ‘survivors’ throughout Asean increased 4.58 per cent DoD, while deaths increased 2.29 per cent.

There has been 2,726 deaths attributed to COVID-19 in Asean member countries, representing a case mortality rate (CMR) based on completed cases (number of discharged + number of dead) of 6.16 per cent. Based on the total number of infections the CMR is 3.06 per cent.

As of today, May 31, some 50.30 per cent of all confirmed COVID-19 infections throughout Asean remain active.

China yesterday reported four new infections and 11 discharges to see the active number of cases there drop to 63. There has been 82,999 SARS-CoV-2 infections in China with 78,302 people having recovered and 4,634 official deaths.

There has been 1,816,280 confirmed SARS-CoV-2 infections recorded in the USA with only 29.47 per cent of all diagnosed US cases being discharged.

Marginally behind the USA is Brazil where 890* people reportedly died from COVID-19 ailments yesterday bringing the total number of deaths there to 28,834, fourth in the world for total deaths behind Italy at 33,340, and ahead of France at 28,771.

Some 30,102 new cases were reported in Brazil yesterday bringing the total number of active infections to 264,235, second globally to the USA.

At the current rate there will be/ have been more than 8.5 million SARS-CoV-2 infections by the middle of June, with some 440,000 deaths.

In the past seven days COVID-19 related illnesses have been blamed for the deaths of 26,898 people.

Global COVID-19 overview up to May 31

COVID-19 in Asean: update for March 19 — deaths soar in Indonesia