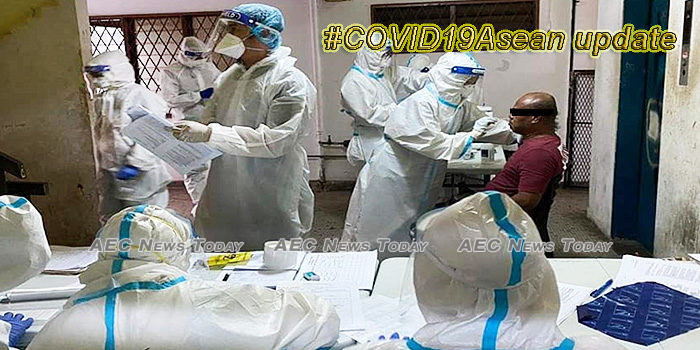 Indonesia yesterday continued to record the most number of deaths throughout the region with 50 fatalities taking the number of deaths there to 1,851, while 672 new infections pushed the active caseload to 18,837. Following treatment 591 people were declared as recovered.

In the Philippines nine fatalities yesterday pushed COVID-19 deaths there to 1,003, while 555 fresh infections saw the active caseload jump to 16,362, of which 82 are regarded as serious or critical. Following treatment 89 people were declared as recovered.

In Singapore yesterday the combination of 383 new infections, and 327 discharges saw the the number of active cases bump up to 12,999**, three of whom are regarded as serious or critical.

Malaysia yesterday recorded 19 new infections and 39 discharges to see the active caseload ease down to 1,531, while eight fresh cases and one recovery in Thailand saw the active caseload there move up to 82, of which one is said to be in a serious or critical condition.

In Myanmar two new cases saw the active caseload there rise to 80, while one fresh cases in Cambodia saw active infections there edge up to three, one of whom is said to be in a serious or critical condition.

There were no changes reported in Brunei, Lao PDR, or Vietnam over the past 24-hours.

Since the first Asean case of COVID-19 was identified in Thailand on January 12 there has been 103,282 confirmed cases recorded in Asean member countries with 50,302 people, or about 48.70 per cent, of all infections having been treated and discharged.

In the past 24-hours the number of COVID-19 ‘survivors’ throughout Asean increased 2.19 per cent DoD, while deaths increased 1.97 per cent.

There has been 3,062 deaths attributed to COVID-19 in Asean member countries, representing a case mortality rate (CMR) based on completed cases (number of discharged + number of dead) of 5.74 per cent. Based on the total number of Asean infections the CMR is 2.96 per cent.

As of today, June 8, some 48.33 per cent of all confirmed COVID-19 infections throughout Asean remain active.

Global COVID-19 cases up to June 8

China yesterday reported six new infections and three recoveries to see the active caseload there rise to 70, while the total number of infections edged up to 83,036, with 78,332 recoveries and 4,634 official deaths.

Chile records most deaths in 24-hrs

Including the figures already posted and which will appear in tomorrow’s global tally, up to 00:33 GMT on June 8 Mexico has recorded 117,113 cases of COVID-19 and 13,699 deaths, and currently has 18,985 active cases, ranking it 14th in the world for total infections and seventh for total deaths.

In the past seven days COVID-19 related illnesses have been blamed for the deaths of 31,377 people.

Global COVID-19 overview up to June 8

COVID-19 in Asean: update for May 20 — cases fall in Singapore for 5th consecutive day