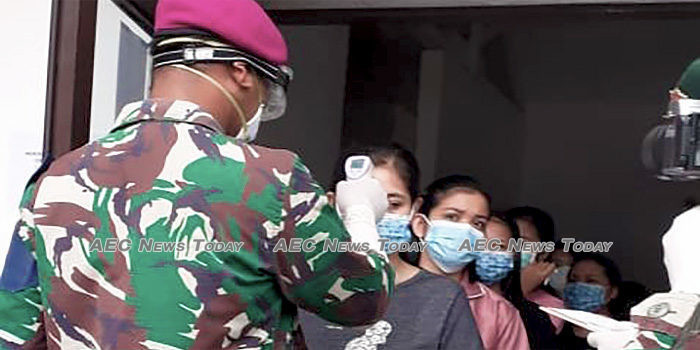 In mid-February, Indonesia’s Health Minister, Terawan Agus Putranto pointed to divine intervention when explaining that no cases of COVID-19 had been identified in Indonesia.

Despite his advice for continued prayer the first case was confirmed on March 1. During the following weeks many more cases were confirmed. As of March 30, the total stood at 1,285 and the number of related deaths increased to 114; By April 11 that number had swelled to 3,842 confirmed SARS-CoV-2 infections and 327 deaths.

From an international perspective, the numbers are still low, especially relative to Indonesia’s population. But it is now understood that this is due to under-testing.

Indonesia has one of the lowest rates of COVID-19 testing, and it is concentrated in greater Jakarta where the country’s best medical facilities are.

Consequently, the real total number of cases is unknown, but it is safe to assume that it is much higher than the official numbers indicate.

Based on the test results, the number of virus-related deaths doubles every four days in Indonesia. If the spread continues unabated, by mid-May most Indonesians may be infected, and the COVID-19-related deaths could run into the millions.

The spread of infections will put Indonesia’s healthcare system under enormous strain. Symptomatic people first present themselves in large numbers at the local Puskesmas health clinics. They have committed staff, but limited care capabilities. Mass testing is impossible due to a shortage of testing kits, even though testing will identify carriers and is crucial to curtail the spread of the virus.

The next line of care for the critically ill are public and private hospitals. Nation-wide Indonesia has about 300,000 hospital beds, or just over one bed per 1,000 people.

Not all symptomatic patients will need hospitalisation, but even if 10 per cent of patients affected by COVID-19 require hospitalisation, there will be insufficient capacity. The capacity to put patients on respirators is even lower.

Subsequently, most symptomatic people will be cared for at home, increasing the risk of infecting family and potentially exacerbating the infection rate.

Indonesia’s population is relatively young so the recovery rate may be higher than in countries with ageing populations like Italy and China. While most COVID-19 patients will recover, exposure to infection will take a toll on Indonesia’s older generations.

The Indonesian government may be contemplating a lockdown. China was successful in enforcing lockdowns in Hubei province on January 23 to contain the spread of the virus. But similar measures will be harder to implement in Indonesia for at least three reasons.

First, it is unclear where Indonesia’s centres of contagion are. Current data indicates that Jakarta has about 54 per cent of infections, followed by neighbouring West Java and Banten with about 10 per cent each. But this likely reflects the superior testing facilities in western Java and not an accurate spread of the virus.

Due to its geography, much of Java is an almost continuous urban conglomeration. A full lockdown in just Jakarta will be difficult to enforce due to people commuting to neighbouring cities in greater Jakarta, which are under different administrations. An effective full lockdown of Java would require all administrations on the island to cooperate to define and enforce restrictions on the movement of people.

The drastic lockdown worked in Hubei, as it was supported by China’s central government. But a full lockdown in Jakarta will encumber the central government located there. And fully locking down the whole island is likely to hamper much of Indonesia’s economy.

President Joko Widodo has denied that he is considering a partial or national lockdown. Meanwhile, authorities in Jakarta, Banten, Tangerang, and Surakarta have started to take measures amounting to a limited lockdown.

The government has announced three stimulus packages, with a total value of Rp181 trillion (about US$11 billion), aimed at keeping Indonesia’s economy afloat during the coming weeks.

This is equivalent to 1.1 per cent of GDP in 2019 and is indicative of the government’s concern about the impact of the pandemic on the economy.

It needs to build public confidence and trust in its leadership. This will take effort, as Indonesians are generally not imbued with a strong sense of trust in politicians and the public service.

President Widodo enjoys public support that saw him re-elected in 2019. But such trust may evaporate quickly if ambiguity, inconsistency and lack of transparency start to mar the public measures needed to curtail the pandemic.

Since China’s strategy of limiting social media is not an option, unambiguous and consistent public communication will be crucial to dispel rumours and misinformation.

Government and public agencies must be frank and clear about what they know, how they assess the situation, and communicate their intentions. Clear communication with regional governments will also be crucial in defining, coordinating and implementing remedial efforts.

This article was written by Pierre van der Eng, an associate professor of International Business at the Research School of Management, The Australian National University. It first appeared on East Asia Forum under a Creative Commons License and is reproduced here with its permission.

Has the PSI already been eaten by Indonesia’s predatory politics?