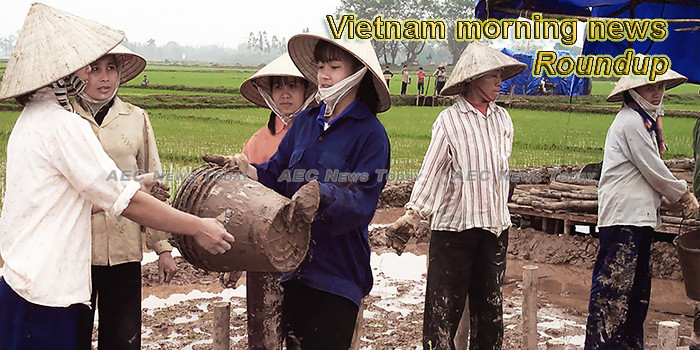 U.S. Presses Vietnam on Food Imports to Narrow Trade Gap
Vietnam must clear the backlog of U.S. imports, especially farm goods, to narrow the two countries’ trade imbalance, a U.S. agricultural official said as U.S. farmers seek to make up for lost sales in the trade war with China.
— BloombergTax

Vietnam is one of the easiest places to start a business in Southeast Asia: Olam
A big advantage was Vietnam’s absence of tariffs and its position as a “gateway” to ASEAN.
— The Hanoitimes

Vietnam makes list of top three investors in Cambodia
Foreign investment in Cambodia has increased rapidly over the past years and Vietnam is among thethree largest investors in the country.
— NDO

Vietnam targets to lower bad debt ratio to below 3% by 2020
From the government’s point of view, bad debt resolution must be based on market principles and risk sharing mechanism.
— The Hanoitimes

Outdated policies deter Vietnam’s sharing economy development
It is necessary to identify, implement and build management models for sharing economy applications in the country’s major sectors such as banking and transport.
— The Hanoitimes

Hanoi’s tap water contaminated with styrene: Mayor
Initial test results show that the levels of styrene in the contaminated water were 1.3 – 3.6 times higher than normal, which can potentially negatively affect people’s health.
— The Hanoitimes

Vietnam and Australia to Work Together on Scientific Projects
From sea cucumbers to cancer research, Vietnam and Australia will start collaborating on science initiatives that are meant to show how innovation can be used to spread out the benefits of economic growth evenly to more of the population.
— VOA

Credit slowdown causes concern about access to bank loans
Viet Nam’s credit growth is slowing and can fall behind the central bank’s target of 14 per cent for 2019, causing concerns that it could make it difficult for businesses to access bank loans during the remaining months of the year.
— Viet Nam News

Low costs in Vietnam a big benefit for Blackstone’s likely nickel development
BLACKSTONE Minerals MD Scott Williams expects operating costs to be significantly lower at the future Ta Khoa nickel development in Vietnam than in other jurisdictions and says the company is “well advanced” in discussions with end users interested in backing the nickel sulphate venture.
— Mining News

Fair on farming products opens in Hòa Bình next month
A fair on agriculture and products under the One Commune One Product (OCOP) programme in the North will be held in Hòa Bình Province from November 1 to November 5.
— Viet Nam News

Vietnam’s Vinfast to secure F1 race headline partnership
As well as naming rights to the event, Vinfast’s deal will see it design the trophy for the inaugural race, which will be presented on the podium by key company representatives. Ed Dixon reports on Sport Pro Media.
— Vietnam Insider