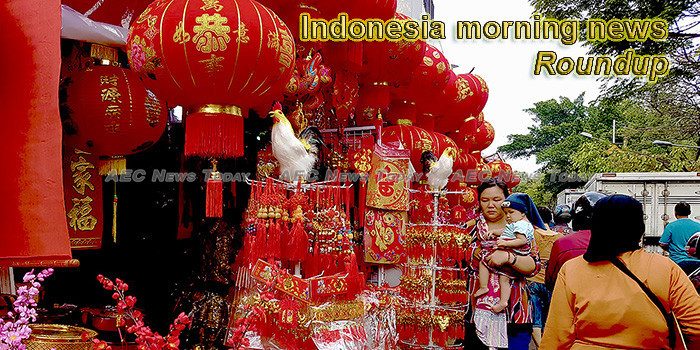 52 aftershocks recorded following Saturday`s 6.0-magnitude quake in Mentawai
The Meteorology, Climatology and Geophysics Agency (BMKG) recorded 52 aftershocks as of 09.00 p.m. on Saturday after an earthquake of magnitude 6.0 hit Mentawai Islands off the western coast of Sumatra Island earlier in the day.
— Antara News

Indonesia eyes $60 billion investment in Singapore
Intellasia East Asia News Indonesia wants to re-position its Batam island as an alternative shipping and manufacturing hub to Singapore with a potential to draw $60 billion in new investment.
— Intellasia

Government still hoping to sign Indonesian free trade agreement this year
Chances of Australia and Indonesia signing off on their Free Trade Agreement before the federal election are slim owing to the ongoing fall-out from government’s overture towards Israel late last year and the looming Indonesian elections.
— Financial Review

That was awkward—at Jokowi event, senior cleric mistakenly prays for Prabowo
A respected Muslim cleric is in the spotlight after a video of him mistakenly praying for Prabowo Subianto to become “a leader” during an event attended by President Joko “Jokowi” Widodo went viral on the web.
— The Nation (very annoying pop-ups)

Sandiaga’s pledge to revise ITE law meets with skepticism
Vice-presidential candidate Sandiaga Uno has promised that if elected, his government will revise the controversial 2008 Electronic Information and Transactions (ITE) Law, but political opponents and civil society activists have cast doubt on the sincerity of the pledge.
— The Jakarta Post

Jokowi Calls for Disaster Education to be Implemented This Year
President Joko Widodo (Jokowi) has called for the implementation of disaster education in every educational institution starting this year.
— Tempo.co

Indonesians spend the 5th longest amount of time on the internet per day: survey
Almost everybody has to spend a huge chunk of their lives on the internet nowadays to do everything from work to socializing to shopping.
— Coconuts Jakarta

Obesity continues to haunt Indonesia despite campaign
The latest case of obesity in Karawang, West Java, has yet again shed light on Indonesia’s rising obesity problem.
— The Jakarta Post

Borneo road, railway projects ‘world’s scariest environmental threat’
When President Joko “Jokowi” Widodo began his tenure in 2014, he uttered his wish to finish a number of infrastructure projects immediately, including the construction of a highway and a railway in Kalimantan.
— The Jakarta Post

Bukittinggi police preach of dangers of radicalism at mosques
Several policemen have turned preachers at mosques in Bukittinggi, West Sumatra Province, as part of the local police`s measures to deal with potential threats of the proliferated ideology of radicalism in society.
— Antara News

Singapore Morning News For May 21