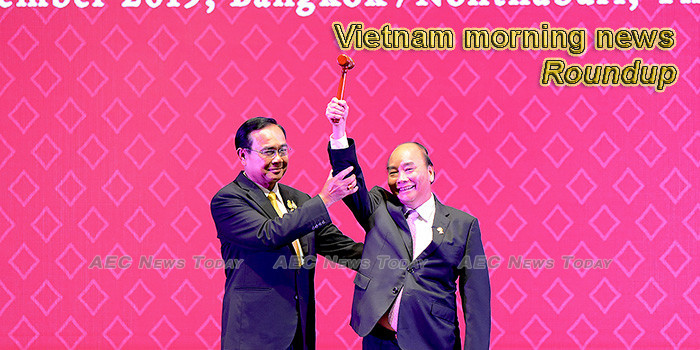 Cryptocurrency rules need to be clarified
The State Bank of Vietnam (SBV) is working on a new decree to regulate cryptocurrency.
— Viet Nam News

Experts warn of trade fraud risks in wood industry
Foreign direct investment (FDI) in the wood processing industry is on an upswing, but it should be tightly controlled to avoid trade fraud.
— Viet Nam News

Ho Chi Minh City has difficulties in garbage collection
The problem was discussed during a talk show held by the HCM City People’s Council about the collecting and transporting rubbish from local households held on November 10.
— Vietnam Insider

Vietnam’s war on China’s illegal South China Sea map has turned to navigation apps
Vietnam has fought Chinese territorial claims over the South China Sea on t-shirts and in a movie. Its latest battleground is phones and cars.
— Qz

Vietnamese families struggle to repatriate Essex lorry victims
The families of the 39 Vietnamese people found dead in a refrigerated lorry in Essex last month are facing financial difficulties over repatriating the bodies of their relatives.
— The Guardian

The puzzles of political reform in Vietnam
Vietnam’s growing economy is one of a very few recent global success stories. With a population of 95 million people and with GDP approaching US$8000 per capita, Vietnam is home to millions of private businesses and has become an attractive destination for foreign direct investment.
— East Asia Forum

Vietnam leading ASEAN’s solar PV market
With the International Monetary Fund (IMF) expecting Vietnam’s economy to grow by 6.5 percent in 2019 and 2020, it is only natural that one of the region’s fastest growing countries is turning towards renewable energy to secure its energy needs.
— The Asean post

US-China trade war sends ripples to Vietnam
The trade war between the US and China is having an impact on economic growth around the world but it has provided a boost to some countries in Southeast Asia, such as Vietnam.
— NHK World

Vietnam land-based salmon farm just one of a broad portfolio for Norwegian aquaculture investment firm
The global advisory firm’s CEO said they would not be restricting themselves in terms of region.
— Intrafish

What Would a Vietnam South China Sea Legal Challenge Mean?
A closer look at the potential implications of a significant move if it is taken.
— The Diplomat

Việt Nam’s export of tea to Taiwan up
About 14,200 tonnes of Vietnamese tea, worth over US$22.5 million, was shipped to Taiwan between January and September, marking a year-on-year increase of 6.1 per cent in volume and 8.3 per cent in value.
— Viet Nam News

Swine Flu Complicates Australia-Vietnam Relations
After news last month that Australia withdrew a visa for a Vietnamese woman who brought pork to the country, another Vietnamese citizen faced the same punishment for a similar offense this month, prompting the Australian government to release an official statement on the matter.
— VOA

Work against trade fraud should be intensified
Minister of Industry and Trade Trần Tuấn Anh has asked market surveillance to promote its role and functions to fight smuggling, trade fraud and fake commodities.
— Viet Nam News

BCG says close to achieving full-year targets
Bamboo Capital Joint Stock Company has said it will surely meet this year’s revenue and after-tax profit targets of VNĐ2.96 trillion (US$127.5 million) and VNĐ312 billion ($13.4 million), which represent an increase of 166 per cent and 265 per cent from last year.
— Viet Nam News

Open mindset needed for public-private partnership law: PM
All fields, except for security and national defense, must be open for investment, said Prime Minister Nguyen Xuan Phuc.
— The Hanoitimes

Gaz launches assembly in Vietnam as US sanctions are postponed
Russian carmaker Gaz is about to begin assembly of its Gazelle Citiline minibus in Vietnam, according to statements made last week by Russian deputy Prime Minister Maksim Akimov.
— Automotive logistics

Year-end promotions heat up e-commerce market
The year-end online shopping frenzy has kicked off with giant local and foreign players like Lazada, Tiki, Sendo, and Shopee rolling out promotions since the middle of last month.
— Viet Nam News

Local fashion brand alleged of selling Chinese products as made-in Vietnam
Customers of Seven.AM accused some products had Chinese labels cut off and replaced with the Vietnamese brand’s label.
— The Hanoitimes

Russia’s GAZ plans to produce trucks in Vietnam to tap FTA
From Vietnam, which has signed many FTAs that are beneficial for companies like GAZ in the country, GAZ can export vehicles to other Southeast Asian countries.
— The Hanoitimes

Dong Nai to assist people affected by airport project
Authorities in the southern province of Dong Nai plan to establish hi-tech agricultural co-operatives to create jobs for those over the age of 40 who are affected by the construction of Long Thanh International Airport.
— VietnamPlus

Hana Bank completes $875m acquisition of 15% stake in Vietnam’s BIDV
Joint Stock Commercial Bank for Investment and Development of Vietnam (BIDV) has completed the sale of a 15 per cent strategic stake to South Korea’s KEB Hana Bank for 20.3 trillion dong ($875 million), it announced on Monday.
— DealStreetAsia

Government agencies slow with online bidding process
Vietnam targets having 50 percent of its bidding packages auctioned online this year, but government bodies have only achieved 30.8 percent so far.
— VnExpress

Consumers show preference for imported cars
The sales of imported cars in Jan-Oct surged 2.2 times, while that of locally-assembled ones fell 12 percent.
— VnExpress

RAL to select adjusting services for fire loss
Rạng Đông Light Source and Vacuum Flask JSC (HoSE: RAL) asked its shareholders to select PVI Insurance Corporation and Vietnam International Adjuster (VIA) to value the damage from the fire in August at the request of Hà Nội’s Police.
— Viet Nam News

This week’s Vietnam morning news feature photo focus on Vietnam’s receipt of the Asean Chair’s gavel for the year 2020.