Vietnam morning news for May 3 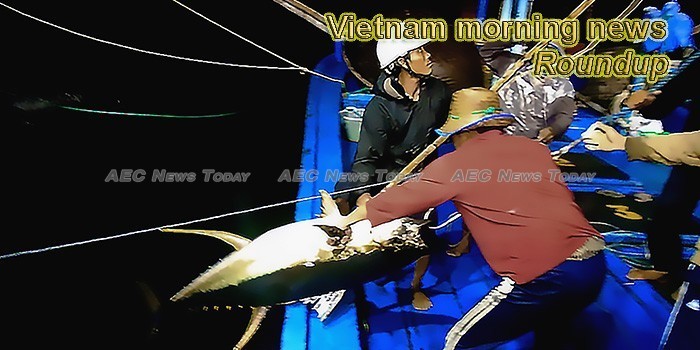 Vietnam targets 50% enterprises operating on digital platform by 2025
A successful digital transformation would help Vietnam’s GDP increase by US$162 billion over the next 20 years.
— The Hanoitimes

Vietnam’s enterprise establishment increases 4.9 pct in 4 months
A total of 43,305 enterprises with total registered capital of 542.4 trillion Vietnamese dong (nearly 23.6 billion U.S. dollars) were set up in Vietnam in the first four months of this year, up 4.9 percent in quantity and up 31.7 percent in capital over the same period last year.
— Xinhua

Developing a transparent water filter market in Vietnam
Tan A Dai Thanh Group has invested in a large scale of product development and research for years and has been able to make products are suitable for the Vietnamese market.
— The Hanoitimes

Export of Vietnamese fruits faces several technical barriers
Exports of fruits in Vietnam have continuously grown, reaching US$3.8 billion in 2018 and aiming at $4.5 billion by 2020. According to the Ministry of Agriculture and Rural Development (MARD), vegetables in general and fruits in particular have a great potential for export because global demand for vegetables and fruits is extremely high.
— Fresh Plaza

Vietnamese Human Rights Campaigner Leaves Thailand for Canada
Human rights activist Bach Hong Quyen left Thailand for Canada on Thursday, ending fears he could be extradited to Vietnam for his role in helping a dissident Vietnamese blogger apply for asylum in Bangkok before he was abducted by Vietnamese agents.
— Radio Free Asia

Vietnam to prosper with private sector capable of competing globally: PM
The government is committed to ensure favorable environment for stronger development of the private sector, especially start-ups.
— The Hanoitimes

Petrol prices up nearly 1,000 VND per litre
The Ministry of Industry and Trade and Finance Ministry revised up petrol prices on May 2, marking the third time they had made price adjustments after using the price stabilisation fund.
— Vietnam Insider

Digitization could add billions to Vietnam GDP: official
Vietnam could add $162 billion to its GDP in 20 years’ time by turning its economy digital, says a deputy minister.
— VnExpress

First look at F1 2020’s Vietnam GP construction, new facility
The first look at the new permanent facility for the Vietnam Grand Prix, set to make its debut on the Formula 1 calendar in 2020, has been revealed by F1 Racing.
— Autosport

Investing in Vietnam’s Consumer Market: An Overview
Vietnam’s consumer market is constantly evolving, driven by changing consumer lifestyles, income, and behavior. The country has experienced a steady progression of disposable income in recent years, which can be seen in its rapid growth of total consumer expenditure from US$80 billion to US$171 billion between 2010 and 2018.
— Vietnam Briefing

Start-up businesses need support from incubators, investors
Start-up businesses have become more important to the Vietnamese economy in the context of the Fourth Industrial Revolution. However, their size and quality have remained modest compared to their potential.
— Viet Nam News

VN stocks may go sideways in post-holiday trading
Vietnamese shares may gain slightly in the post-holiday period as listed firms are giving a few strong clues that could boost the market’s short-term prospects.
— Viet Nam News

EU, Vietnam to ratify “ambitious” EVFTA by end of 2019: HSBC
It is estimated that the EU-Vietnam FTA (EVFTA), the “most ambitious” FTA the EU has ever concluded with a developing country, will add 0.1 percentage point (ppt) on average to Vietnam’s real GDP growth each year based solely on its trade impacts.
— The Hanoitimes

Book-building method available in June for State divestment
The Ministry of Finance has released a circular to instruct State-owned enterprises (SOEs) to use book-building to sell shares owned by the State.
— Viet Nam News

Hai Duong lures 365 million USD in FDI in four months
The northern province of Hai Duong attracted over 365 million USD of foreign direct investment (FDI) in the first four months of this year, up 26.2 percent year-on-year, according to local authorities.
— VietnamPlus

State Treasury to mobilise VNĐ80 trillion of G-bonds in Q2
The State Treasury of Việt Nam has announced plans to auction Government bonds through the Hà Nội Stock Exchange (HNX) in the second quarter with a total issuance of VNĐ80 trillion (US$3.43 billion).
— Viet Nam News

Vietnam benefits from firms’ moving out of China
Vietnam, boasting complete infrastructure, abundant industrial property on offer and a line-up of inked free trade pacts, is an attractive destination for world’s leading corporations, who are shifting production out of China due to high costs, said real estate consulting company CBRE Vietnam.
— VietnamPlus

Vinamilk keeps status as top working place in Vietnam
Vinamilk continued to top the list of 100 Best Places to work in Vietnam in 2018, according to a survey carried out by Anphabe, a career network of management professionals and market research firm in Vietnam.
— VietnamPlus

Over 43,300 new firms set up in four months
As many as 43,305 new enterprises with total registered capital of 542.4 trillion VND (32.32 billion USD) were established in the first four months of 2019, up 4.9 percent in the number of firms and 31.7 percent in capital, according to the General Statistics Offices (GSO).
— VietnamPlus

The Most Popular Gadget Trends to Have Hit Vietnam in 2019
Vietnam, once most recognized for its agricultural growth, has evolved so much so that it has been rumoured the government wants to recreate the land to home the largest gadget corporations. According to source the government has already opened its arms to high end tech companies looking to roll out the latest smart phones, devices and gadgets.
— Vietnam Insider

Nearly 100 people killed by road accidents during holidays
Traffic accidents killed 96 people and injured 96 others during the five-day holiday which lasted from April 27 to May 1, according to the National Traffic Safety Committee.
— VietnamPlus

Vietnam and the Mekong’s Synthetic Drug Epidemic
Mainland Southeast Asia remains a hotspot for illegal drug manufacturing, and Vietnam is emerging as a transit hub.
— The Diplomat

VN stocks may go sideways in post-holiday trading
Vietnamese shares may gain slightly in the post-holiday period as listed firms are giving a few strong clues that could boost the market’s short-term prospects.
— Viet Nam News

Book-building method available in June for State divestment
The Ministry of Finance has released a circular to instruct State-owned enterprises (SOEs) to use book-building to sell shares owned by the State.
— Viet Nam News

Bamboo Airways still most on-time airline in Việt Nam
Last month, Bamboo Airways operated a total of 1,319 flights, of which the number of on-time flights was 1,225, or 92.9 per cent. With this figure, Bamboo Airways maintains its top spot in terms of punctuality in Việt Nam which was previously established in the first quarter of the year.
— Viet Nam News

State Treasury to mobilise VNĐ80 trillion of G-bonds in Q2
The State Treasury of Việt Nam has announced plans to auction Government bonds through the Hà Nội Stock Exchange (HNX) in the second quarter with a total issuance of VNĐ80 trillion (US$3.43 billion).
— Viet Nam News

Đà Nẵng condotel market slows but remains robust
Due to the unclear regulations on condotels, the market in Đà Nẵng slowed down in the first quarter, according to Colliers International Vietnam’s Quarterly Knowledge Report.
— Viet Nam News