Vietnam morning news for May 22 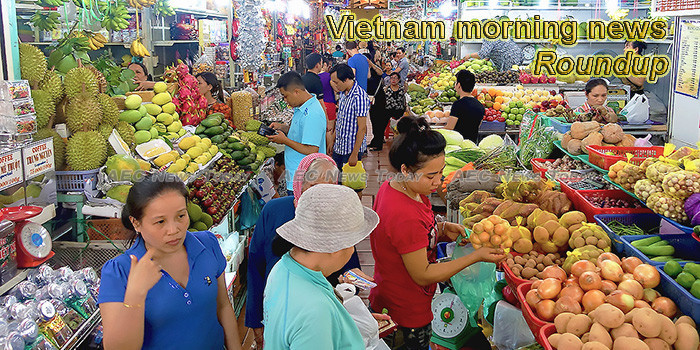 Vietnam imposes duties on imported steel wire, rolled steel
The Trade Remedies Authority of Vietnam under the Ministry of Industry and Trade announced that it has recently issued a decision on application of measures to prevent imported steel wire and rolled steel products from avoiding trade remedies.
— Sggp News

Vietnam’s first-quarter GDP sees 6.79% growth: Government report
Deputy Prime Minister Truong Hoa Binh presented the Government’s report on the implementation of socio-economic development in the first quarter of 2019 and measures for the remaining months of the year at the opening meeting of the 7th session of the 14th National Assembly on May 20.
— NDO

Vietnam to put top ex officials on eight major corruption trials this year
Intensifying its corruption crackdown, Vietnam will bring a series of its former officials to courts from now until year end.
— VnExpress

Vietnam central monetary institution says ready to sell dollars to aid dong
HANOI, Could perchance well well also 21 (Reuters) – Vietnam’s central monetary institution said on Tuesday it used to be ready to pump U.S. dollars into the market to stabilise the dong currency’s alternate charge, because it had advance underneath pressure attributable to fallout from the U.S.-China commerce war.
— National Times

Vietnam salt farmers battered by imports, climate
The salt farmers of Hon Khoi rise before dawn as they have for generations, fanning out across shallow seawater pools in southern Vietnam to harvest the precious mineral, hoping for a better season than the last.
— India Times

Vietnam promotes agricultural products in China
The Vietnam Agricultural Trade Promotion Forum was held in Liaoning province, China, on May 20 with the participation of more than 100 Vietnamese and Chinese agricultural enterprises.
— NDO

HCM City lacks licensed truck, container yards
The number of private, unlicensed container and truck yards in HCM City’s districts 2 and 9 continues to increase because of a shortage of legal truck yards in the city.
— Viet Nam News

Việt Nam coffee exports plummet on global headwinds
Việt Nam’s coffee exports have fallen in both volume and value terms this year, according to the Ministry of Agriculture and Rural Development.
— Eleven Myanmar

Vietnam’s Ongoing Fight Against Agent Orange
Hundreds of thousands of Vietnamese suffer from gene mutations resulting from the Americans’ use of Agent Orange during the war. Birth defects are still a regular occurrence. Now, 44 years later, the U.S. has suddenly pledged more aid.
— Spiegel

Sales of auto down despite of strong discounts
Many businesses strongly reduced price of cars by between tens of millions  to more than hundred million for their clients to stimulate sales, however, the market still witnessed a sluggish consumption, not as expected.
— Viet Nam News

Int’l children festival to be held in Vietnam
Children from eight countries, including China and Russia will participate in an international children festival in Vietnam’s central Quang Nam province on May 26-June 3, the Central Vietnam Television (VTV) said on Tuesday.
— Xinhua

Marian devotion strengthens Catholics’ faith in Vietnam
Joseph Nguyen Dang Binh and his wife were cleaning their newly built house in Vietnam’s Yen Bai province while their neighbors helped beautify their Marian altar with roses, candles and electric lamps on May 4 as the local Catholic community prepared for a Marian march.
— UCA News

Hà Nội set to host banking expo
The 2019 Banking Vietnam to be held on May 30 in Hà Nội will display new technological advancements and applications in the financial-banking sector.
— Viet Nam News

Cuba, Vietnam vow to strengthen ties
Cuba and Vietnam agreed to strengthen bilateral ties by signing a joint plan of political consultations for the 2020-2022 period on Monday.
— China.org

Việt Nam-Russia economic, trade relations thrive
Economic and trade relations between Việt Nam and Russia have been growing consistently, according to the Ministry of Industry and Trade.
— Viet Nam News

Vietnam – working with the government to open the market
In many ways Vietnam is like a phoenix emerging from the ashes of the past. The paralyzing effect of the Vietnam War (1954-1975) and the repression that followed means the economy is growing from a low base.
— Investment Europe

Land clearance for expressway should be completed soon: ministry
Officials have been told by the Ministry of Transport to finish land clearance for the ongoing Bến Lức – Long Thành Expressway project, which has been delayed because of several problems.
— Viet Nam News