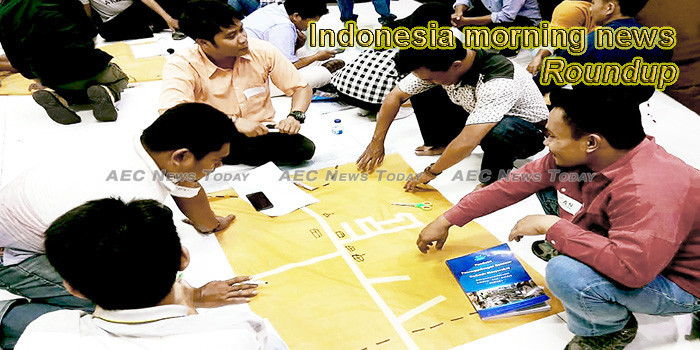 Indonesia On Track for $133b Digital Economy by 2025: Google
Tech giant Google and Singaporean wealth fund Temasek have updated their projection for Indonesia’s internet economy to reach $133 billion in total value by 2025, 33 percent higher than previously estimated.
— Jakarta Globe

Central Java: This is climate change (video)
While climate science denialists may wish to continue to repudiate the realities of the current climate crisis, one needs go no further than Bedono, Central Java.
— AEC News Today

Indonesia Dominates ASEAN Ride-Hailing Sector
A report entitled “Swipe up and to the right: Southeast Asia’s $100billion internet economy”, compiled by Google, Temasek, and Bain & Company, cites Indonesia as the ‘king’ in the ride-hailing sector, or application-based transportation services, with the industry reaching US$6billion in 2019.
— Indonesia expat

Singapore, Indonesia renew US$10b currency pact for another year
Singapore and Indonesia will renew a US$10 billion (S$13.8 billion) currency pact, which will help support monetary and financial stability in the region.
— The Straits Times

Indef: Forex Reserves Down because of Trade War
Indonesia’s forex reserves at the end of September 2019 dropped by US$2.1 billion from August’s US$126.4 billion.
— Tempo.co

Police foil bomb attack plan linked to 212 Islamist rally
The National Police have foiled an attempt to explode bombs in business districts across Jakarta, which was allegedly planned and organized by a university lecturer and a retired Navy officer.
— The Jakarta Post

Constitution Amendment Deemed by Experts as Political Maneuver
Constitutional law expert Bivitri Susanti argued that the plan to amend the 1945 Constitution (UUD 1945) is not backed by a solid reason and slammed it as a mere political elite maneuver, and not based on public demand.
— Tempo.co

Bekasi Forms Task Force to Monitor Plastic Ban Policy
Bekasi administration has established a Zero Plastic task force to monitor the use of plastic among state civil apparatus in a bid to realize a city without plastic by 2020.
— Tempo.co

Drought paralyzes life in 11 villages in Blitar, East Java
The Blitar district administration has provided clean water to the residents of 11 villages reeling from the impact of the prolonged drought during the current dry season.
— Antara News

Indonesia, Germany to Cooperate on Electric Vehicle Production
Bilateral relations between Indonesia and Germany will continue to strengthen and will include future cooperation between the two countries’ automotive industries on electric vehicle production, a top official said last week.
— Jakarta Globe

BRI teams up with Traveloka to offer Brizzi e-money card top-up service
State-owned lender Bank Rakyat Indonesia (BRI) has teamed up with travel and lifestyle services startup Traveloka to integrate the bank’s Brizzi electronic money card with the unicorn’s application in an effort to increase both Brizzi and Traveloka’s transaction volumes.
— The Jakarta Post

Economics professor elected as first female Unpad rector
Bandung’s state-run Padjajaran University (Unpad) finally has its new and first female rector as the university’s board of trustees (MWA) appointed Rina Indiastuti to serve for the 2019-2024 period.
— The Jakarta Post

OVO becomes Indonesia’s fifth unicorn startup, Rudiantara says
Digital payment service OVO has become an Indonesian startup unicorn, as the company is now valued at more than US$1 billion, according to Communications and Information Minister Rudiantara.
— The Jakarta Post

Police Name 13 Suspects in Ties to Widespread Riots in Wamena
The Papuan Police has named 13 individuals as suspects that are suspected to be involved in the deadly riots in the city of Wamena, Papua.
— Tempo.co

Indonesian man rapes and impregnates daughter, tries to get her a boyfriend to take responsibility of child
Police in the city of Banjarbaru in South Kalimantan recently arrested two men suspected of sexually abusing a minor, who is the daughter of one of the suspects.
— Coconuts

Students compete to create energy saving cars in Malang
Eighty teams of students from 45 universities throughout the country gathered in Malang, East Java for the 2019 Energy Saving Car Contest (KMHE) to help develop the future energy.
— The Jakarta Post

Three Banyuwangi cyclists bike against all odds to Aceh to celebrate New Year
Physical disability is not an obstacle for three cyclists from Banyuwangi, East Java, who are on their way to the Zero Kilometer Monument, the country’s westernmost point in Sabang, Aceh.
— The Jakarta Post

Treasure hunting on burned peatland puts South Sumatra authorities on guard
Authorities in South Sumatra are on the alert as they tighten security to put a stop to any attempts of treasure hunting in areas where centuries-old ancient valuables were recently unearthed following months of wildfires in parts of the province.
— The Jakarta Post

Boba with a twist: Jakartans introduced with savory boba mix
Bubble tea, popularly known as boba, is taking the nation by storm to the point where boba sellers and festivals dedicated to the much-loved tapioca balls can be found at nearly every corner of the city.
— The Jakarta Post