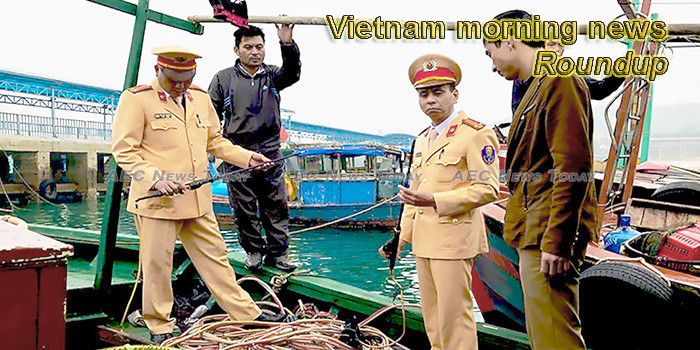 Viettel becomes one of world’s biggest telcos
Since 2000, Viettel has earned an accumulated revenue of more than VND1.78 quadrillion (US$76.5 billion), and VND334 trillion (US$14.3 billion) in profit.
— The Hanoitimes

Agriculture ministry gathers ideas for timber regulations
The Ministry of Agriculture and Rural Development (MARD) is calling for ideas to create a draft decree that establishes a system of regulations ensuring Vietnam’s legal timber and wood products qualify for import and export.
— VietnamPlus

Petrol prices drop in latest review
The retail prices of oil and petrol were adjusted down from 3 pm on June 1 following a decision made by the ministries of finance and industry and trade.
— VietnamPlus

Three bears freed from captivity in central Vietnam
Three bears in Nghe An Province have been released from illegal captivity and moved to a rescue center.
— VnExpress

New policies push foreign investors’ interest in Vietnamese road sector
The country plans to need about US$480 billion for infrastructure investment by 2020, with additional projects in the pipeline including about 1,380 km of highway and around eleven power plants.
— The Hanoitimes

Pilots Who Flew For Air America In Vietnam Fight For Pensions
America’s final act in the Vietnam War produced an iconic image: a helicopter on a rooftop as desperate Vietnamese tried to climb aboard. For some involved in the mission, the story isn’t over.
— NPR

Vietnam gets over W1 tril. in financial aid from Korea
Vietnam was the largest recipient of funding from the Economic Development Cooperation Fund (EDCF) provided by the Export-Import Bank of Korea (Korea Eximbank) over the past five years, the bank said Sunday.
— Korea Times

Vietnam builds a luxury yacht marina
Few things are more anathema to communism than a superyacht, except perhaps taking a ride to the marina in a Bentley.
— Taipei Times

Officers break up Laos-Vietnam drug ring, confiscate 100,000 narcotics pills
Officers in the north-central Vietnamese province of Quang Binh have arrested a Laotian suspect and confiscated 100,000 pills of synthetic drugs as they broke up an illicit ring that smuggled narcotics from Laos into Vietnam.
— Vietnam Insider

Why foreign investors call Vietnam a rising Asian star?
Vietnam is a growing heavyweight in Asia thanks to competitive wages, growth in manufacturing and foreign investment.
— The Hanoitimes

Vietnam, China boost agricultural and aquatic exports
Measures to promote the export and import of agricultural products, fruit and seafood between Vietnam and China were discussed at a conference held in Lao Cai city on May 31.
— NDO

Government to issue policies to encourage clean pork purchase
The Government will consider incentives to encourage firms to buy clean pork for freezing and storage amid the spread of the African swine fever disease, Deputy Minister of Industry and Trade Do Thang Hai said at the Government’s regular press conference on May 31.
— VietnamPlus

In Vietnam, online shoppers concerned as delivery services require ID photo
Many Vietnamese have aired their concern about privacy as several delivery services of online retailers require an ID photo of the receiver.
— Tuoi Tre News

Seminar promotes Vietnam-Russia trade and investment ties
A seminar was held by the Vietnam Trade Promotion Agency (VIETRADE) at the Food City Trade Centre in Moscow, Russia, on May 31, aiming to help Vietnamese businesses to conduct market surveys and seek partners, towards inking contracts to export products into the Russian market.
— NDO