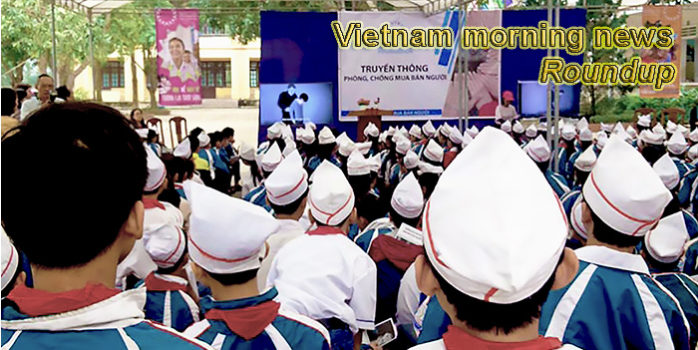 Vietnam Electricity to add 1,480 MW into national grid
In the first six months of 2019, EVN added 4,753 MW into the national grid, of which solar power projects amounted to 4,397 MW, resulting in total power generation capacity in Vietnam of 53,326 MW as of June.
— The Hanoitimes

Red tape hinders growth of Vietnam’s wind power industry
Less than 200 megawatts of offshore wind has been installed in Vietnam, despite the huge unexploited wind power potential in the country.
— The Hanoitimes

Nearly 400 Chinese detained in record Vietnam gambling bust
More than 380 Chinese nationals were detained during a raid on a gambling ring in Vietnam, state media reported Sunday, July 28, in what police claim is the biggest-ever betting operation run by foreigners.
— Rappler

More than 70 Vietnamese senior officials punished since 2016
Most of high-ranking officials were punished for corruption charges, indicating the party`s determination to fight graft.
— The Hanoitimes

Steel industry forecast to maintain stable growth
Vietnam’s steel production and consumption in the first half of 2019 recorded respective increases of 7.7 percent and 9.8 percent year-on-year, according to the Vietnam Steel Association (VSA).
— VietnamPlus

These Are the Best Times to Visit Vietnam
This post contains references to products from one or more of our advertisers. We may receive compensation when you click on links to those products. For an explanation of our Advertising Policy, visit this page.
— The Points Guy

D1 builds duplex villa in vietnam with local materials and a coconut leaf roof
situated on a 600 sqm land plot adjacent to the hoi an river in quang nam province, vietnam, the M villa by architecture studio D1 is built with local materials and skilled craftsmanship, which help integrate it within the surroundings that are still wild and under-developed.
— Designboom

Samsung SDS acquires 25% stake in Vietnam’s IT service firm
Samsung SDS will become the largest shareholder of Vietnamese IT services company CMC Corporation, it said Sunday, noting that the investment is expected to contribute to expanding its business in the Southeast Asian market.
— Korea Times

China’s Disregard for Vietnamese Sovereignty Leaves the Region Worse Off
China shows it prefers a region where “might makes right.”
— The Diplomat

Foreign investors continue to pour money into Đang Nai
The southern province of Đang Nai lured more than US$1.14 billion in foreign direct investment (FDI) in the first seven months of this year, easily surpassing its target for the entire year, according to the provincial Department of Planning and Investment.
— Viet Nam News

500 cops bust online gambling ring in northern Vietnam
The Hai Phong police busted a high-tech gambling ring in the city on Saturday and took hundreds into custody, most of them Chinese.
— VnExpress

Vietnam Trade Union promotes its tradition to contribute to national renewal
The Chairman of the Vietnam General Confederation of Labour, Bui Van Cuong, has shared with Nhan Dan Newspaper correspondent Dang Thanh Ha on the Vietnam Trade Union (VTU) developments and the worker’s movement in Vietnam, on the occasion of the 90th anniversary of the VTU’s establishment (July 28, 1929-2019).
— NDO

Vietnam, US share audit experience
Deputy State Auditor General Vu Van Hoa has expressed wish to continue cooperating with the US’s Public Company Accounting Oversight Board (PCAOB) in the near future during a recent working session in Washington D.C.
— VietnamPlus

Vietnam ambitious for own social networks to compete with Facebook
Several social networks have been launched with an aim to build Vietnam`s own platforms amid the dominance of Facebook.
— The Hanoitimes