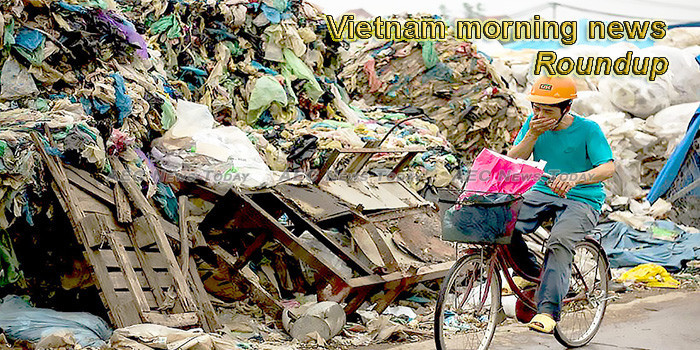 Vietnam and Japan firms ink gas deal as Hanoi looks beyond coal
Japan’s JXTG Nippon Oil & Energy will tie up with a Vietnamese state-owned oil company on liquefied natural gas, the companies said Monday, with the duo expected to build facilities and collaborate on procurement in the Southeast Asian country.
— Nikkei Asian Review

Retail revenues surge 11.5 per cent in H1
The nation’s total revenue from retail sales and services saw a significant growth of 11.5 per cent to more than VNĐ23.9 quadrillion (US$101.74 billion) in the first half of this year.
— Viet Nam News

Forest in north-central Vietnam still burning, three days after wildfire broke out
Wildfires have been raging across a pine tree forest in the north-central Vietnamese province of Ha Tinh for the past three days, with local authorities doing their utmost to control the flames and evacuate local residents from dangerous areas.
— Vietnam Insider

Vietnam boosts confidence to attract EU’s high-quality investment
The signing of the EU-Vietnam Free Trade Agreement (EVFTA) and the EU-Vietnam Investment Protection Agreement (EVIPA) marks a new step of developing the comprehensive partnership and cooperation between the two sides initiated in 2012.
— NDO

Vietnam’s PMI rises in June
Vietnam’s purchasing managers’ index (PMI), which measures economic health of the country’s manufacturing sector, rose to 52.5 in June from 52.0 in May, the latest survey from Nikkei revealed on Monday.
— Xinhua

Number of foreign visitors to Việt Nam declines in June
Nearly 1.9 million foreigners visited Việt Nam in June, data of the Việt Nam National Administration of Tourism (VNAT) showed, the lowest number in any month since the beginning of the year. The number of visitors was down 10.6 per cent from May but still represented a year-on-year rise of 0.2 per cent.
— Viet Nam News

New firms up almost 4% in H1
About 67,000 new enterprises were registered in the first half of this year, the highest number of the first six months in the last five years, according to the Ministry of Planning and Investment.
— Viet Nam News

Commentary: Vietnam’s air exports to the U.S. increase as China-U.S. trade war simmers
The Asian supply chain is best described as a spider web with China the central focal point. It was like that well before President Trump’s tariffs were implemented.
— Freightwaves

Big pork shortage looms over Việt Nam
Việt Nam could have a shortfall of 500,000 tonnes of pork, or nearly 20 per cent of demand, in the period until the Lunar New Year in early 2020 due to the effect of African swine flu, according to global research firm Ipsos Business Consulting.
— Viet Nam News

Market to rebound in the third quarter
The Vietnamese stock market is forecast to recover with improved liquidity in the third quarter thanks to the stable macro-economy and positive development of the world socio-economic situation.
— Viet Nam News

Are US veterans of Iraq, Afghanistan and Vietnam treated equally?
The Iraq war was seen as a disaster – both by Americans and by people around the world. Yet those who fought in the war are nevertheless honoured, a striking departure from the way that service members were treated when they came home from Vietnam.
— BBC

To win in tech and beyond, Vietnam should complement, not compete with ASEAN
Last week, global and regional leaders gathered in Bangkok for the Bloomberg Asean Business Summit. On the agenda: accelerating regional growth, assessing opportunities for economic transformation, debating the region’s technological potential, and much more.
— Business Times

Feature: China’s cultural tourism highlighted, adored in Vietnam
“If these beautiful products are for sale, I will buy them immediately,” a Vietnamese young man told Xinhua on Monday, pointing his hand to a USB drive in the form of a Guangxi bronze drum and then a smartphone cover with images of a dragon and a phoenix.
— Xinhua

Vietnam’s remarkable economic turnaround
Since the “Doi Moi” reforms in the mid 1980s, the Southeast Asian country has undergone a phenomenal transformation from one of the poorest countries in the world to a booming emerging economy.
— DW

Armenian PM to visit Vietnam
Armenian Prime Minister Nikol Pashinyan will make an official visit to Vietnam on July 4-7, according to the Vietnamese Ministry of Foreign Affairs on Monday.
— Xinhua

Boat tours in HCM City lack passengers
Boat tours along HCM City’s canals, which were expected to boost water tourism, have failed to attract tourists because of a lack of facilities and waste discharge in waterways.
— Viet Nam News

Vietnam reports fewer food poisoning sufferers in H1
In the first half of this year, 866 people in Vietnam suffered from food poisoning, of whom five died, the country’s Preventive Health Department said on Monday.
— Xinhua

Number of foreign visitors to Việt Nam declines in June
Nearly 1.9 million foreigners visited Việt Nam in June, data of the Việt Nam National Administration of Tourism (VNAT) showed, the lowest number in any month since the beginning of the year. The number of visitors was down 10.6 per cent from May but still represented a year-on-year rise of 0.2 per cent.
— Viet Nam News