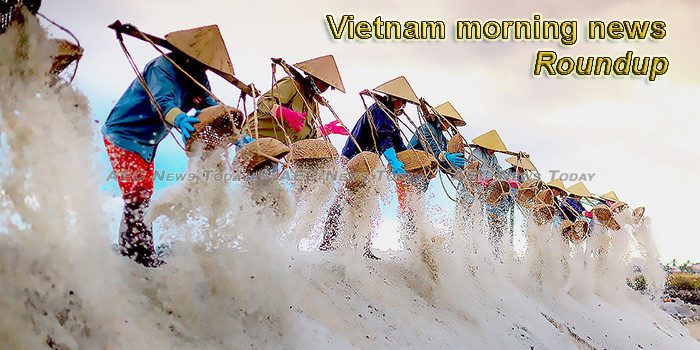 Vietnam’s Economy Grows the Fastest Since 2011
Driven by the growth in exports, domestic demand, foreign investment, and the manufacturing sector, Vietnam’s GDP grew by 7.08 percent in 2018, the fastest in the last decade.
— Vietnam Briefing

Controversy over Hà Nội’s no-recording policy
A recent Hà Nội policy barring citizens from taking photos, videos or audio recordings without permission during meetings with public servants has created controversy, with many criticising its implications for transparency efforts.
— Vietnam News

VPBank awards $43,000 scholarships
VPBank has awarded scholarships totalling VNĐ1 billion (US$43,000) to 39 students under its ‘VPBank Talent’ programme and more than 100 as part of ‘Home of Talent’.
— Vietnam News

CPTPP to raise national GDP
The Comprehensive and Progressive Agreement for Trans-Pacific Partnership (CPTPP) is expected to help raise Việt Nam’s gross domestic product (GDP) by 1.3 per cent, according to an official from the Ministry of Planning and Investment (MPI).
— Vietnam News

A vegetable a day helps to keep the obesity away
Like many 10-year-olds, Trần Dũng Thành loved fast food. What kids don’t?
— Vietnam News

Inshore shipping routes prove competitive edge
Shipping routes along the coast of Vietnam have played an increasingly large role in transporting goods from the north to the south of the country in recent years, helping ease the burden on road transport.
— VNA NET

Cassava industry faces big hurdles
Cassava processors are facing difficulties due to a raw material shortage and, especially, tightening of overland imports and erection of barriers to imports of farm produce by China, their largest export market.
— Vietnam News

Over 6 billion USD purchased to raise forex reserves
The country net purchased over 6 billion USD in 2018 to raise its foreign exchange reserves, the State Bank of Vietnam (SBV) reported at a meeting in Hanoi on January 9 to launch tasks for the banking sector this year.
— VNA NET

Vietnam says it wants to host TrumpKim summit
Vietnam has delivered to both South and North Korea its wish to host the envià¸sioned summit between US President Donald Trump and North Korean leader Kim Jongun.
— The Nation (very annoying popups)

Funds suffer losses on poor market performance
Over the past year, most investment funds in Việt Nam’s equity market have seen negative growth in net asset value per share (NAVPS) due to the poor performance of the market indices.
— Vietnam News

Vietnam’s incense village blazes pink ahead of Lunar New Year
It is the most frantic time of year for workers in the cottage industry in Quang Phu Cau village on the outskirts of Hanoi, where families have been making incense for more than a century – a great source of pride for many.
— VN Express

Incurring big losses in 2018, investors became disillusioned with cryptocurrency
After booming in price in 2017, bitcoin (BTC) and other cryptocurrencies all tumbled in 2018. By January 1, 2019, the price of one bitcoin had dropped to $3,700, a dramatic fall from the peak of $19,665 per bitcoin seen on December 16, 2018.
— Vietnam Insider

US firms help digitalise data of Hue relic sites
The Hue Monuments Conservation Centre is partnering with US Seagate and CyArk companies to digitalise data of two heritages of TuDuc Tomb and An Dinh Palace, Director of the centre Phan Thanh Hai said on January 9.
— VNA NET

MIC announces Facebook’s violations in Việt Nam
The Ministry of Information and Communications (MIC) is considering preventing cash flowing into hatred advertising on Facebook and collecting taxes to deal with the social network’s violations of laws in Việt Nam.
— Vietnam News