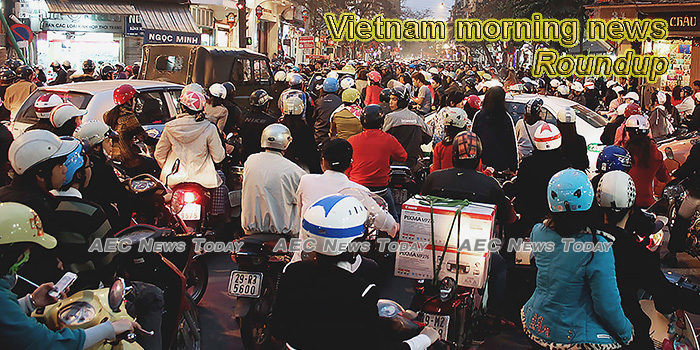 Vietnam’s Ho Chi Minh city ranked 3rd among the best cities in the world to live
As the New Year approaches, many people will probably start to think of ringing in new changes to their lives. And for many, that may mean finding a new place to live in.
— Vietnam Insider

Vietnam ex-minister gets life sentence for bribery
A court in Vietnam sentenced a former communications minister to life in prison Saturday for receiving millions of dollars in bribes, as the hardline administration presses its anti-graft drive against once-powerful figures in the communist state.
— The Asean Post

Vietnam to Punish Firms for Trade Fraud in China-Product Probe
Vietnam will punish four companies for fraudulent labels on products from China that the firms claim were made locally, as authorities expand their crackdown.
–Bloomberg

Export turnover might reach target this year
According to the Ministry of Industry and Trade, up to now, export turnover has hit US$264 billion, a short of $4 billion to achieve the export target set for this year. However, the ministry said that the country will meet that goal when the year 2019 ends.
— Sggp News

Vietnam welcomes record number of foreign visitors in 2019
Vietnam greeted over 18 million international tourists in 2019, the highest level so far, according to the General Statistics Office.
— VietnamPlus

Vietnam continues its active and effective contributions to promoting global peace and cooperation
From January 1, 2020, Vietnam will officially assume the role of a non-permanent member of the United Nations Security Council (UNSC) for the 2020-2021 tenure, holding the UNSC presidency right in the first month of the year.
— NDO

Keeping 2020 inflation below 4 pct will be difficult: official
Keeping CPI below 4 percent next year will be a tough task, challenging with prices of pork and other essentials being unpredictable variables.
— VnExpress

Textile: key lessons from Vietnam
Top advisors to the prime minister of Pakistan have continuously asserted that Pakistan’s economy is improving, but not in a way that has created jobs.
— Daily Times

Public forum idea for border work transparency shot down
Sok Touch, president of the Royal Academy of Cambodia, yesterday shot down a suggestion that the government should hold public forums to ensure transparency as it demarcates the border with Vietnam.
— Khmer Times

Vietnam Attracts More Foreign Direct Investment
Details are still settling on the first phase of a trade deal between the United States and China. One country that has benefitted from the recent trade tension is Vietnam — and other countries in the region are taking note.
— Vietnam Insider

Vietnam’s business formations rise to record high
Average registered capital per newly-established enterprise reached VND12.5 billion (US$540,889) during this period compared to the past few years, up 11.2% year-on-year.
— The Hanoitimes

North Korean Fighter Pilots Battled American Jets Over Vietnam
In the year 2000, a visit by North Korea’s foreign minister to a cemetery in Bac Giang, Vietnam confirmed a long-rumored fact: dozens of North Korean pilots had dueled American Navy and Air Force pilots over the skies of Vietnam during the 1960s. And fourteen North Korean Air Force did not return alive.
— National Interest

Vietnam, China hold negotiations on sea-related issues
Vietnam and China held their 12th round of negotiations regarding the seas beyond the mouth of the Gulf of Tonkin and their 9th round of talks for consultation on cooperation for mutual development at sea in Beijing last Wednesday and Thursday.
— Inquirer.net

Vietnam on right track in fighting against IUU fishing
The European Commission (EC) Inspection Delegation on illegal, unreported, and unregulated (IUU) fishing appreciated and gave thanks for the commitments and political determination as well as the great efforts made by Vietnam in the fight against IUU fishing and the implementation of the EC’s recommendations.
— NDO

2019: Eight defining events for Vietnam
Among the high profile events that marked the year for Vietnam, VnExpress presents a selection of eight landmarks and milestones.
— VnExpress

Christmas lights, tangled in trade war, show Vietnam’s struggle
In living rooms across the U.S. and the world, Christmas lights this year tell a complicated trade-war tale that stretches all the way to Vietnam.
— Sentinel source

SIMON PARRY visits the region of Vietnam where 39 migrants began their journey
Here, such is the fierce desire to begin life anew in England, many consider the dangers of being trafficked thousands of miles a risk worth taking, and the deaths simply bad luck.
— Sky Statement