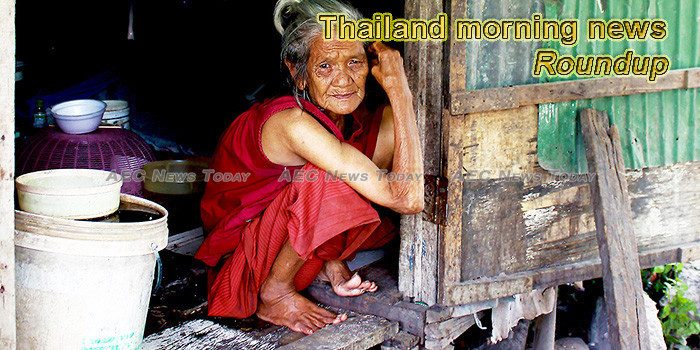 Commerce attaches put on trade-war alert
Commerce Minister Sontirat Sontijirawong has urged commerce attaches to prepare for a global trade war, which he said is likely to intensify next year.
— Bangkok Post

IMF forecasts higher growth for Thailand
The International Monetary Fund (IMF) has raised its Thai economic growth projections for this year and next from 3.9% to 4.6% and 3.8% to 3.9% respectively.
— NNT

Blockbuster drug haul worth over B2bn in Chiang Rai
More than 20 million speed pills and 100kg of crystal methamphetamine — worth over 2 billion baht — have been seized and three alleged traffickers arrested in two major police operations in Chiang Rai province.
— Bangkok Post

Thailand’s weak education system a big drawback for development
Thailand’s outdated and somewhat defunct education system is holding back a new generation from becoming productive and innovative, it turned out in the new Human Capital Index issued by the World Bank and released on October 11.
— Investine

Why Thailand risks getting its fingers burned in combating rise in smoking
In the past 10 years, Thailand has attempted to curb smoking by enlarging the size of picture health warnings on cigarette packs repeatedly.
— The Nation

Farmers pay the price for EEC
AN INCREASING number of people in the Eastern Economic Corridor (EEC) provinces are finding themselves victims of unjust expropriation and land-grabbing, as developers hunt for sites to facilitate investment and industrial development.
— The Nation

SET backs automated reports
The Stock Exchange of Thailand (SET) will talk with other capital market organisations this week and seek ideas for boosting the number of analysts and increasing the overall quality of Thailand’s capital market.
— Bangkok Post

ThaiBev pushes food business growth
THAI BEVERAGE (ThaiBev) is revising its crucial strategy with a focus on increasing organic growth and continuous expansion of its food business operating under its current restaurant brands.
— The Nation

Energy Ministry to find fuel pricing aid for low-income motorcycle taxi drivers
Energy Minister, Dr. Siri Jirapongphan, said his ministry has been assigned by the cabinet to discuss with PTT and oil station operators details of a campaign to help maintain fuel prices for low-income motorcycle taxi drivers holding the state welfare cards and registered with the Department of Land Transport.
— Pattaya Mail

Survey: Women upbeat on tech field
While a majority of women feel their gender positively affects their ability to pursue a career in tech, 77% acknowledge they face more challenges to grow and succeed than men.
— Bangkok Post

Corteva Agriscience and IRRI announce rice tech partnership
the agriculture division of US giant DowDuPont – and the International Rice Research Institute (IRRI) on Monday announced a multi-year framework agreement on collaborative rice research, deployment of new breeding technologies and the development of breeding programmes.
— The Nation

New service from EPPO for retail oil price comparisons in ASEAN
The Energy Policy and Planning Office (EPPO) has launched a new service called Energy Data Visualization (EDV) which provides analyses and comparisons of retail prices of oil in Thailand and the capitals of 10 ASEAN countries.
— NNT

Nectec academy formed to help train IoT skill set
AN Internet of Things (IoT) Academic Network is being set up through a collaboration involving the National Electronic and Computer Technology Centre (Nectec) and 23 educational institutes and schools to develop human resources in the country.
— The Nation

Kingsmen Talks: The consequences of failing to understand the importance of proper hospitality training
Michelin stars were awarded to selected restaurants in 2017/2018 and additional ratings are expected to be given in 2019, as fine dining and accommodations are established in other areas across Thailand.
— Bangkok Post

Thailand most visited destination among Chinese for Golden Week
The Tourism Authority of Thailand (TAT) says that Ctrip.com, China’s largest and most influential online travel agent, has ranked Thailand the number one destination among Chinese tourists during this year’s National Day vacation – the Chinese Golden Week 2018, the National News Bureau reports.
— The Nation

Thailand the real winner of MotoGP spectacle
The PTT Thailand Grand Prix, the country’s first ever MotoGP event, has been hailed as a big success.
— The Phuket News

ABB ties up with KMITL for robotics
Zurich-based technology provider ABB is teaming up with King Mongkut’s Institute of Technology Ladkrabang (KMITL) to promote robotics education in Thailand.
— Bangkok Post

MPV that makes room for style and handling
While Thailand is the largest market for pickup trucks in the Asean region, Indonesia is the biggest market for MPVs (Multi-Purpose Vehicles), which is a good thing.
— The Nation

Thailand prepares for shocks, beefs up resilience
Thailand, Indonesia’s next door neighbor, appears to be confident in facing the rising global pressures, as the country’s monetary and fiscal authorities have implemented a series of measures to help reduce heavy volatility in its currency and maintain a stable interest rate.
— The Jakarta Post

The impact of Industry 4.0 on HR professionals
Now we have embarked on Industry 4.0 – the era of artificial intelligence and the Internet of Things (IoT). Digitisation is advancing at such a rapid pace that businesses must be prepared for the many changes that technology poses.
— Bangkok Post

Developed markets will rise above the noise
Global stock markets tumbled last week as concerns about a trade war and better-than-expected US employment data stirred fears of inflation and a more aggressive approach to interest-rate increases by the US Federal Reserve.
— Bangkok Post

Aberdeen: Silver lining in trade spat
The ongoing trade dispute between China and the US may end up being advantageous for Thailand, says Martin Gilbert, chief executive of Aberdeen Standard Investments.
— Bangkok Post

FICO has faith in AI as equitable force
Despite mounting concern over job-stealing artificial intelligence as machines take over Thailand’s lending industry, the analytics firm FICO sees AI as a force for good that could make lending not only safer and more efficient, but even more equitable.
— Bangkok Post