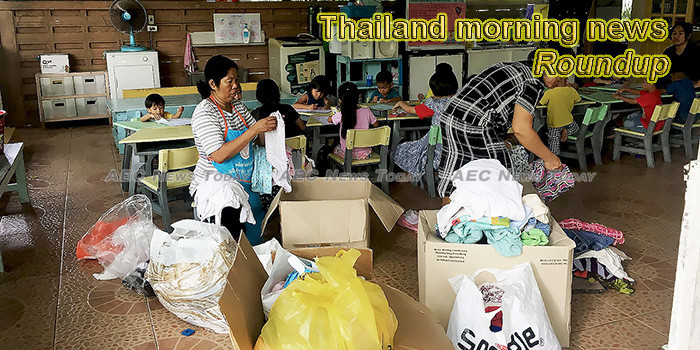 Karen activist ‘Billy’ killed and incinerated in oil drum – DSI
Karen human rights defender Polajee “Billy” Rakchongcharoen was killed and his body stuffed into and burned in a 200-litre oil drum, which was later dumped into a river in Kaeng…
— Thai PBS News

Ninth turtle succumbs to pollution in Sattahip this past week
Another dead turtle washed up on a Sattahip beach, bringing this week’s total to nine. Sea Turtle Hospital Veterinarian Kirin Sorapipatcharoen confirmed after autopsy the turtle died from consuming plastic garbage, most likely confusing it for jellyfish.
— Pattaya Mail

Paris court hands ex-Thai airline CEO 4-year jail term over 2007 crash
A French court on Tuesday sentenced the former head of a Thai budget airline to four years in jail over a 2007 crash that killed 90 people, nearly two-thirds of them foreigners.
— CNA

NESDC: Growth is slow, there is no recession yet
The government think tank National Economic and Social Development Council (NESDC) insists the economy experiencing slow growth, not a recession.
— Bangkok Post

Police arrest suspected bomb maker
Authorities have arrested the suspected bomb-maker responsible for the explosives used in a series of blasts in Bangkok last month as the city hosted a major regional summit, police said on Tuesday.
— Bangkok Post

Flood-hit Northeast braces for more rain
Rescue teams are working around the clock to drain water in flood-stricken towns across the top half of the country as a new storm moves in, bringing more rain to the region.
— Bangkok Post

MPs want more time to grill PM
The opposition cried foul on Tuesday over the cabinet’s decision to leave the general debate on Prime Minister Prayut Chan-o-cha’s oath-taking blunder until the last day of the current parliamentary session on Sept 18.
— Bangkok Post

Thailand urged to act on disappearances
International groups are calling for Thailand to enforce a law against the torture and involuntary disappearance of human rights advocates, protestors and suspects in national security cases after a UN Working Group published details of 86 outstanding incidents.
— Bangkok Post

National park chief says officials implicated in Billy’s murder won’t be protected
Chief of the National Park, Wildlife and Plant Conservation Department has given an assurance that he will not protect any of his officials if they are implicated in the kidnapping and murder of Karen human rights defender Polajee “Billy” Rakchongcharoen.
— Thai PBS News

Porlajee ‘was murdered’
The Department of Special Investigation (DSI) is identifying suspects after concluding that missing Karen rights activist Porlajee “Billy” Rakchongcharoen was murdered, following the discovery of a burnt piece of his skull in the reservoir of Kaeng Krachan dam in Phetchaburi province.
— Bangkok Post

Plans to streamline tourism handout
The Comptroller-General’s Department plans to streamline the registration process to attract merchants to participate in the 1,000-baht cash giveaway as well as the 15% rebate for travel to destinations outside home provinces as the participation level is below 50%.
— Bangkok Post

Prosecutors to tell Thanathorn on October 1st if he faces criminal proceedings over Facebook show
Future Forward leader Thanathorn Juangroongruangkit and two members of the opposition party will be told on the first day of October if they are to face criminal charges in court over a Facebook live broadcast on June 26th last year.
— Thai Examiner.com

Thai people earn more in 2nd quarter: report
Thai people have earned more incomes in the second quarter of this year, reported the Office of the National Economic and Social Development Council on Monday.
— Xinhuanet

TAI pushes 19 measures for EV progress
The Thailand Automotive Institute (TAI) has suggested 19 measures for the Industry Ministry to promote the government’s electric vehicle (EV) scheme as it is concerned the country will lose competitive advantage against Indonesia, Malaysia and Vietnam.
— Bangkok Post

NBTC mulls payment reprieve following 5G spectrum auctions
The telecom regulator is considering allowing a three-year grace period for licence payments for the upcoming auction on a series of spectrum ranges meant for 5G development to attract them to invest in network infrastructure.
— Bangkok Post

MPs petition against domestic abuse law
The government is facing its next time bomb after the opposition petitioned the Constitutional Court, challenging the status of the emergency decree the cabinet has passed in connection with criminal investigations into domestic violence cases.
— Bangkok Post

SIMTec launched to develop labor skills to accommodate EEC
Fourteen state enterprises and 18 foreign companies have jointly established the Sumipol Institute of Manufacturing Technology (SimTec) in the Eastern Economic Corridor (EEC), as part of the government’s effort to prepare for the infrastructure to support investment in high-tech industries in the EEC.
— NBT World (video)

10 firms seek to capitalise on BX closure
Bitcoin Co Ltd’s recent closure announcement is unlikely to have a negative effect on Thailand’s digital asset industry because there are about 10 other companies applying to become authorised digital asset exchanges, says the Securities and Exchange Commission (SEC).
— Bangkok Post

Senate endorses state attorney
The chief of the Department of Special Litigation under the Office of the Attorney-General has won the Senate’s endorsement as the new attorney-general.
— Bangkok Post

Digital Ministry to introduce anti fake news LINE account
The Minister of a Digital Economy and Society has held discussions with LINE Thailand about setting up an official account on the LINE chat platform in order to address fake news.
— NBT World (video)

Agriculture minister to propose guaranteed rubber prices
The Ministry of Agriculture and Cooperatives has revealed it will propose to the cabinet plans to guarantee the prices of rubber products and assist the 1.4 million rubber farmers who have suffered revenue losses during the last five years due to declining rubber prices.
— NBT World (video)

Terminal 2 ‘must proceed’
Prime Minister Prayut Chan-o-cha insists that construction of Terminal 2 at Suvarnabhumi airport must go ahead despite an ongoing dispute over its location.
— Bangkok Post

Rail regulator weighs off-peak discounts
The Department of Rail Transport is considering electric train discounts during off-peak hours on certain routes to boost the number of passengers by about 10%.
— Bangkok Post

Two Fishermen Charged for Killing Dolphins for Jerky
Two fishermen were charged on Monday for illegal fishing after a video of them catching several dolphins in a fishing trawl sparked online outrage.
— Khaosod English

Abbot Raped Teen for Five Years, Refuses to Exit Monkhood
An abbot who confessed to serially raping a teenager over a period of five years until she fell pregnant is refusing to leave the monkhood as of Tuesday.
— Khaosod English

Rail Dept. mulls 40% off-peak discount for Blue & Purple lines and Airport Link
The newly-established Rail Department will propose that the Transport Ministry consider a reduction in electric train fares of up to 40% during off-peak hours, from 10 am to 4 pm.
— Thai PBS News

The problems with Phuket’s lifeguarding, in plain sight
After viewing the news and photos today of yet another body retrieval from Phuket’s ocean waters, this latest is unfortunately one in a long-line of such grisly episodes, for as many years as I can remember.
— The Thaiger

Large heroin bust announced in Bangkok
The deputy national police has announced the arrest of two suspects in two large drug seizures. Heroin weighing 100 kilograms, plus one and a half kilograms of cocaine were seized.
— The Thaiger

AirAsia X orders 42 new long-haul Airbus jets
Bernama AirAsia X, the long-haul part of the AirAsia Group, has now finalised a major order with Airbus for 12 more A330-900 and 30 A321XLR aircraft.
— The Thaiger

Three Russians arrested over alleged property fraud in Pattaya
Chonburi police have arrested three Russians in the car park of the Ocean Portofino Condo, next to Ocean Marina, in Na Jomtien, south of Pattaya yesterday.
— The Thaiger

Mae Hong Son school inundated by flooding in Thailand’s north
The clean up is continuing today at a school for hilltribe children in Mae Hong Son’s Mae Sariang district in far north Thailand was hit by mountain runoff and floodwaters from last week’s heavy rain.
— The Thaiger

Third Bangkok Bombing Suspect Arrested
Another suspect has been arrested in connection to bomb attacks that rocked the capital on Aug. 2. Muhammad Ilham Saeed, 28, was flown from a detention center in the Deep South to Bangkok for further interrogation on Monday, after he was arrested at a border checkpoint in Narathiwat on Aug. 5.
— Khaosod English

Thai police get tough on drivers at pedestrian crosswalks in Pattaya
Police in Pattaya have launched a campaign aimed at encouraging pedestrians to use crosswalks, and fining motorists who don’t stop at them.
— The Thaiger