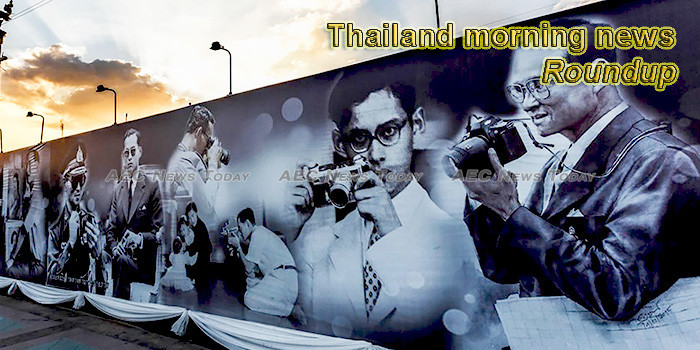 Pheu Thai calls for urgent probe about alleged meddling in Yala’s judicial affairs
The Pheu Thai party is urging the government to investigate alleged meddling with the judiciary after a judge in the Yala provincial court shot himself on Friday in an apparent suicide bid related to unwarranted interference.
— The Thaiger

Gun judge faces flak
A report into the self-shooting by Judge Khanakorn Pianchana will be submitted on Monday to the Judicial Commission for consideration, according to Sarawut Benjakul, secretary-general of the Office of the Court of Justice.
— Bangkok Post

NHSC urged to quickly decide chemicals’ fate
Deputy Minister of Agriculture and Cooperatives, Mananya Thaiset, says it is “not the time” to demand the government issue an executive decree to ban the use of three toxic chemicals that are widely used in Thailand.
— Bangkok Post

Thailand and Myanmar Agree to Push Ahead With Dawei Special Economic Zone
Myanmar and Thailand have published their nine-point agreement to push through the implementation of the long-delayed US$8-billion (12.23-trillion-kyat) Dawei Special Economic Zone (SEZ) in southern Myanmar’s Tanintharyi Region, which is set to be Southeast Asia’s largest industrial complex.
— Irrawaddy

Kobsak: 3% GDP growth achievable
The government is maintaining its target for GDP growth of 3% this year, with a series of additional stimulus measures expected to boost the economy.
— Bangkok Post

Police Won’t Comment on Belgian Reporter Allegedly Detained for Redshirt Interview
A Belgian journalist was briefly detained while he was preparing to interview with a prominent Redshirt activist, a media organization said Friday.
— Khaosod English

Operation to remove dead jumbos from waterfall stalled
PRACHIN BURI: An operation was launched on Sunday to remove the carcasses of six wild elephants found on Saturday after falling from the top of Haew Narok waterfall in Khao Yai National Park and drowning, an official said. As of 8pm Thai time, the operation was yet to be successful.
— Bangkok Post

Pattaya Mayor inspects water drainage road construction works in Pattaya…only about 10 percent done
Officials have announced phase 1 of the construction on the flood system along Pattaya Beach Road is now 10% complete and predict a section of the thoroughfare around Soi 13/3 and Soi 13 will be open within a few weeks.
— The Pattaya News

These 7 homegrown e-commerces are on track to put Thailand on global map
Southeast Asia is no stranger when it comes to strategically playing the e-commerce card, Thailand as a case in point. Although yet to see its first unicorn, Thailand’s e-commerce sector has blossomed and produced a total of US$3 billion in market value in 2018, as stated in an article by Bangkok Post. In the industry, […]
— e27

Judge’s Protest by Attempted Suicide Shakes Judicial Authority
Thailand’s courts find themselves under intense scrutiny Friday after a judge shot himself to protest alleged interference in a trial that would have sent five men to death row.
— Khaosod English

Opposition claims they have not considered amending Constitution Section 1
Opposition parties have distanced themselves from Kasetsart University lecturer Mrs. Chalita Bandhywong, who has come under heavy online criticism for her proposal to amend Section 1 of the Constitution, defining Thailand as a single and indivisible kingdom, a proposal which some have interpreted as advocacy for separatism.
— Thai PBS News

Regulator agrees to single flat-rate numbering fee
The telecom regulator has agreed to set a single flat rate of 1.62 baht for the mobile phone numbering fee collected from operators per month per number.
— Bangkok Post

Rate cut better than cash payout: expert
More cuts in the Bank of Thailand’s benchmark rate will be a more powerful option for stimulating the economy than the government’s 1,000-baht cash handout scheme, said an expert.
— Bangkok Post

Drone used to track 2 surviving elephants in Khao Yai
A drone has been used to locate two elephants that survived a plunge down a waterfall in Khao Yai National Park, a veterinarian said on Sunday.
— Bangkok Post

3m meth pills, 40kg ice seized in Chiang Rai
CHIANG RAI: Authorities seized 3 million methamphetamine pills and 40 kilogrammes of crystal meth, or ice, after giving chase to a car which broke through a drug checkpoint in Chiang Saen district of this northern province on Sunday morning, according to media reports.
— Bangkok Post

Tourism Authority focuses on last quarter of 2019, drawing more Chinese tourists a top priority.
The Tourism and Sports Ministry and the Tourism Authority of Thailand (TAT) discussed how to stimulate tourism in the last quarter of 2019, aiming to draw more Chinese tourists to Thailand in accordance with Minister Pipat Ratchakitprakan’s policies.
— The Pattaya News

NBTC bans TOT from project contracts
TOT is banned from all future projects commissioned by the National Broadcasting and Telecommunications Commission (NBTC) after the regulator on Friday nullified three contracts under the Universal Service Obligation (USO) Net project that had been awarded to the state telecom enterprise, citing contractual violations.
— Bangkok Post

Excise Department helps stimulate grassroots economy
In response to the government’s policy to support income distribution in local communities, the Excise Department is to arrange activities to boost the income of participating communities across the country, and strengthen the domestic economy amid the global economic slowdown.
— NNT

THAI CEO dismisses speculation that the airline is in financial crisis
Thai Airways International does not have a liquidity problem and it has sufficient revolving funds to continue operations into the future, THAI CEO Mr Sumet Damrongchaitham assured today.
— Thai PBS News

Thai student detained in Cairo returns
Ibroheng Mali, the 25-year-old Thai Muslim student who was detained in Cairo, Egypt over his suspected ties to the Islamic State (IS) group, has been freed and is back in his home in Yala.
— Bangkok Post

Thai cave film makes world premiere at Busan festival
Directed by Irish-Thai film-maker Tom Waller, the film is the first in what is expected to be a rollout of big- and small-screen treatments of the cave rescue.
— CNA

Thailand market among Asean best
Thailand has been one of the better-performing markets in Asean, a region that has done well for investors in times of volatility, say analysts from Principal Financial Group.
— Bangkok Post

Beam me up from Khao Kala’s Buddhist statue – UFOs come to Thailand
Just north of Bangkok, in Nakhon Sawan, an unlikely not-very-tall hill with a Buddha statue atop, is attracting throngs of UFO-seekers.
— The Thaiger

Thai man arrested after hiding in woman’s bathroom and watching women at local mall
A Thai man was arrested yesterday, October 5th, 2019, after he allegedly hid himself in the women’s bathroom of a popular local shopping mall with the intention of watching women use the restroom.
— The Pattaya News