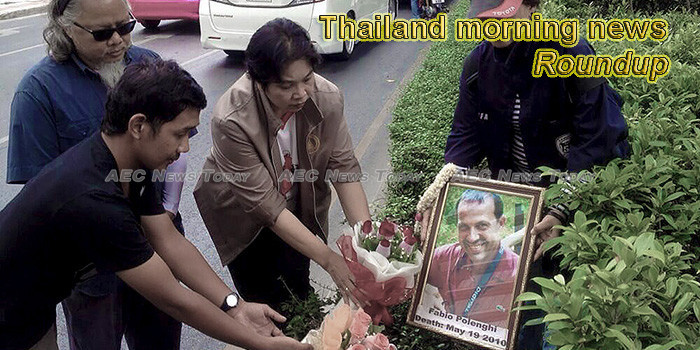 Thailand will negotiate with US on GSP issue during ASEAN Summit in Bangkok
Thailand will hold talks with the United States, about the GSP (Generalized System of Preferences) suspension for Thai exports to the US market, on the sidelines of the ASEAN Summit, being held in Bangkok from November 2nd to 4th, Prime Minister Prayut Chan-o-cha said today (Monday).
— Thai PBS News

Over 1,000 expected to attend ASEAN business summit
More than 1,000 business leader, high-level government officials and representatives of private sectors as well as academics and members of civil society from across the region are expected to attend the ASEAN Business and Investment Summit (ABIS) to be held in Bangkok on November 2-3.
— Thai PBS News

September factory output seen down 2%
Annual manufacturing output in September likely declined at a slower pace than in the previous month, a Reuters poll showed on Monday.
— Bangkok Post

Thailand’s Sept foreign tourist arrivals up 10% y/y – ministry
Tourist arrivals in Thailand rose 10.11% in September from a year earlier, after an increase of 7.35% in August, the tourism ministry said in a statement.
— Yahoo News

Scammers’ assets targeted
The Ministry of Justice has ordered officials to find ways of ensuring that victims of pyramid schemes get their money back, either by confiscating scammers’ assets, using tax measures or by other means.
— Bangkok Post

Elon Musk’s hearing over Thai cave diver ‘pedo guy’ slur to begin amid ‘con man’ investigation
An academic in South Africa has cast doubt on Elon Musk’s defence that the term “pedo guy” is a common insult in Pretoria and therefore not defamatory, ahead of Tuesday’s hearing and his legal counsel doubling-down on the stance to the ABC.
— ABC News

Pope’s Mass set to spill beyond Bangkok stadium
Tens of thousands of Catholics are expected to attend the Holy Mass given by Pope Francis at the National Stadium on Nov 21.
— Bangkok Post

Body in fridge sparks murder probe
Police are searching for a female friend of Wannee Jiracharoenying, a wealthy estate developer believed to have been murdered after a decomposing body was found in a refrigerator at a house in Chiang Mai’s Chom Thong district on Sunday.
— Bangkok Post

One man dead, one seriously injured after shooting at chicken fight in Chonburi
Chonburi Police are hunting for a prime suspect as one person has died and one person was injured from gunshots after a chicken fight ended in tragedy near Pattaya.
— The Pattaya News

When and Where to Catch Pope Francis in Bangkok
BANGKOK — Pope Francis will roll down the streets of the Thai capital in a locally-made, electric Popemobile during his apolistic visit this November.
— Khaosod English

Thai exports will suffer from Trump labour rights decision
The Thai export sector will suffer another blow after the US President Donald Trump announced on Friday the suspension of 1.3 billion dollars worth of duty-free trade for certain Thai goods, claiming Thailand has not taken steps to protect the labor rights.
— The Thaiger

Thai banks report strong mortgage growth despite April’s new loan regulations
Ever since the Thai government enforced the higher loan-to-value ratios on property lenders last April, borrowers and developers have been generally unhappy with the result – a sluggish new home-buyer market.
— The Thaiger

Thanathorn Welcomes China’s Bigger Role, Denies Supporting HK Protests
Opposition co-leader Thanathorn Juangroongruangkit on Monday said he has never lent his support to the ongoing protests in Hong Kong, contrary to a claim made by the army chief earlier this month.
— Khaosod English

Illegal market tents removed in Prachuap Khiri Khan
Residents of the Gulf coast’s Prachuab Kiri Khan are in two minds about the removal of market trader tents that were encroaching on a busy public road, according to Matichon Online.
— The Thaiger

The scourge of human trafficking
The case of 39 people, most Vietnamese, found dead in a refrigerated trailer in Britain highlighted the fact that human trafficking and modern slavery are still a huge problem for Asia, and the entire world for that matter.
— Bangkok Post

What Thais want to see in 2020 Budget
In a few months’ time, the current Thai government’s position could be hanging in the balance.
— The Asean Post

Myanmar seeks Thai help in arrest of fugitive gold mining executive
Myanmar will seek the help of Thai law enforcement officials to arrest a gold mining executive who fled to the kingdom after he fled an arrest warrant for allegedly violating a government order to stop extraction of precious metal in his concession.
— Myanmar Times

Moon to visit Thailand, Mexico, Chile in November
Cheong Wa Dae announced Monday, President Moon Jae-in will visit Thailand next week for an annual international conference followed by an official trip to Mexico and his participation in another global meeting to be held in Chile.
— MENAFN

Foodies on cloud nine
At a bustling warehouse market, tucked away on a back street off busy Rama IV Road, around 50 Grab delivery drivers hang around a takeout counter waiting to get pinged on their smartphones for new food deliveries.
— Bangkok Post