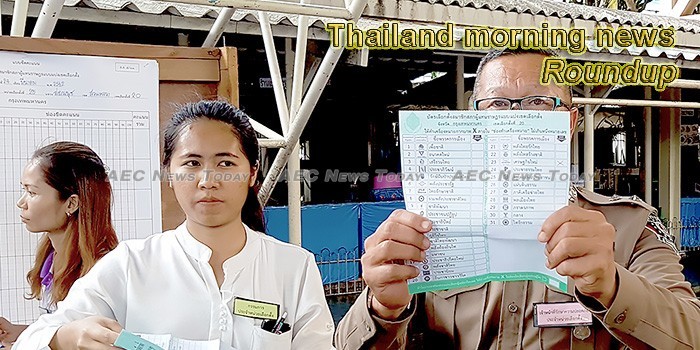 EC announces constituency winners
The Election Commission of Thailand (EC) has announced the winners of electoral constituencies via its website. The Pheu Thai Party takes the greatest number of seats in the lower house.
— NNT

North blanketed in smog, authorities spray water
The North of Thailand has continued to struggle with smog, which is impacting public health and tourism.
— NBT World

Pheu Thai now claims to have the numbers to form a coalition. So does Palang Pracharat.
Pheu Thai Party, which at this stage has emerged as the winner of the most lower house seats after the general election, says they’ve gathered enough support from political allies to form a coalition government.
— The Thaiger

Thailand election: Thaksin alleges ‘irregularities’
In an interview with BBC Thai, former prime minister Thaksin Shinawatra alleges there were “a lot of irregularities” in Sunday’s election in Thailand which have left him worried.
— BBC

Transport Co checks public vehicles ahead of Songkran
The Transport Company is participating in measures to ensure road safety, ahead of the Songkran Festival.
— NBT World

SPECIAL REPORT: Phuket election results to stand, vote count confirmed manually
Technical difficulties with the report-sharing app were to blame for the late vote count in the nation election on Sunday night (Mar 24), forcing local officials to count the votes manually, the Director of the Phuket office of the Election Commission (PEC) explained to The Phuket News today (Mar 26)
— The Phuket News

Phuket Governor ‘urges’ action to save water ‘in case of drought’
The Governor of Phuket has urged relevant agencies to find raw water reserves to supplement public water supply and to conduct public-awareness campaigns for conserving water use in order to reduce the volume of water residents are using “in case of a drought”.
— The Phuket News

Pheu Thai to announce coalition
At least six pro-democracy parties led by Pheu Thai will hold a briefing on their intention to form the government even without Bhumjaithai or the Democrats on Wednesday morning.
— Bangkok Post

Election observers say Thai vote count was flawed
A group of international observers criticized vote counting in Thailand’s first election since a 2014 military coup, saying Tuesday that the “tabulation and consolidation of ballots were deeply flawed” though it had no reason to believe the issues affected overall results.
— AP

Thailand Vote Result Delayed Until Friday
Still no clear result from Thailand’s general election over the weekend. Both major parties are claiming the right to form a government and now election authorities are facing calls to resign for repeatedly delaying the results and failing to account for mounting voting irregularities.
— Bloomberg

Prayuth Tells Media to Respect People’s Voices
Junta chairman Prayuth Chan-ocha on Tuesday urged everyone to respect what people voted for, in a response from media inquiries about whether his party should form the next government.
— Khaosod English

General Elections Were Peaceful But Not Fair: Intl Observer
The only accredited international observers present at the general election said Tuesday that the polls had been peaceful but not fair, because the incumbent prime minister – who is also a candidate – will handpick all senate members.
— Khaosod English

US sees ‘positive signs’ in Thai election
The United States said on Tuesday (Mar 26) that it saw “positive signs” of a return to democracy in Thailand but urged a transparent probe of allegedly widespread irregularities.
— Channel NewsAsia

Thailand’s puzzling election results explained
Thailand’s 2014 coup leader and junta chief Prayut Chan-O-Cha is one step closer to power after a shock election Sunday that lifted his party ahead in the popular vote.
— Coconuts (paywall)

EU, UK Urge Thailand to Resolve ‘Election Irregularities’
The United Kingdom and the European Union on Tuesday called on Thai authorities to look into reports of irregularities related to the March 24 general election.
— Khaosod English

Phuket election results to stand, vote count confirmed manually
Technical difficulties with the report-sharing app were to blame for the late vote count in the nation election on Sunday night (Mar 24), forcing local officials to count the votes manually, the Director of the Phuket office of the Election Commission (PEC) explained to The Phuket News today (Mar 26)
— The Phuket News

Sudarat Slams Phalang Pracharath’s Claim of Victory
Pheu Thai leader Sudarat Keyuraphan on Tuesday lashed out at her rival for claiming a right to form the government despite coming in second place at the polls.
— Khaosod English

Shares linked to Bhumjaithai’s Anutin jump on poll results
Shares of companies linked to billionaire politician Anutin Charnvirakul, who campaigned in Thailand’s election on a pledge to legalise marijuana, leapt on Monday after partial results suggested his party could be a key part of a coalition government.
— Bangkok Post

Why you should visit Thailand’s Chiang Mai
The unofficial second city of Thailand, chilled out Chiang Mai stands in stark contrast to the busting highways and glittering skyscrapers of Bangkok. Nestled among lush hills, Chiang Mai does taking it easy better than any other city in the region, with first-rate street food, cool bars and hotels that offer luxury accommodation without the price tag.
— CNN

Commissioners Confirm Voiding of All NZ Ballots
The Election Commission confirmed Tuesday that all ballots from New Zealand would be voided because they were delivered too late.
— Khaosod English