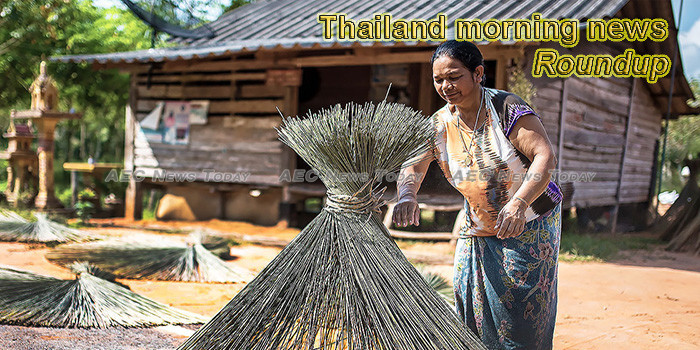 Thai second-quarter GDP growth seen weakest in four-and-a-half years as exports tumble: Reuters poll
Thailand’s economic growth likely slowed in April-June from the prior three months, with the annual pace the weakest for any quarter in four and a half years, amid cooling global demand and trade tensions, a Reuters poll showed.
— Reuters

Senior NACC official faulted for omitting 227m baht from asset declaration
Thailand’s National Anti-Corruption Commission has faulted one of its senior officials for concealing his and his wife’s assets worth about 227 million baht.
— Thai PBS News

Ranong Port to boost trade with India
The Port of Authority of Thailand (PAT) is pressing ahead with the development of Ranong Port as a logistics gateway between Thailand and India as both countries have agreed to promote a new maritime route in the Andaman Sea.
— Bangkok Post

15-Day Visa Exemption Proposed for Chinese and Indian Tourists
Soon visitors from China and India may no longer need to queue up for a visa on arrival at airports, as cabinet is set to approve a visa exemption scheme this August.
— Khaosod English

Motion to grill Prayut expected on Friday
Opposition parties will file a motion with the House speaker on Friday for a general debate on Prime Minister Prayut Chan-o-cha’s incomplete swearing-in oath.
— Bangkok Post

Thai court approves continued detention of 2 bomb suspects
A court in Thailand on Thursday extended the detention of two suspects accused of planting two small bombs in front of police headquarters in Bangkok while Southeast Asian foreign ministers were meeting nearby.
— Devdiscourse

Digital content to reach B33bn
The value of the digital content industry in Thailand this year is expected to reach 33 billion baht, up 10% from 2018 thanks to rising demand for animation and games in the global market as well as business development and promotion by the private sector and state, says the Department of International Trade Promotion (DITP).
— Bangkok Post

Ombudsman set to rule on PM’s oath slip
The Office of the Ombudsman is expected to rule later this month on a petition involving an incomplete oath recital by Prime Minister Prayut Chan-o-cha.
— Bangkok Post

JSCCIB comes up with six proposals to help stimulate economy
The Joint Standing Committee on Commerce, Industry and Banking (JSCCIB) has come up with proposals in six main areas as a framework for stimulating the economy together with the government.
— NBT World (video)

US invests in Thai solar energy project
The United States has funded a Thai energy developer for its feasibility study of a solar power project in Thailand as part of its Indo-Pacific commitment.
— Bangkok Post

Cop gets 143 years for paedophilia
The Criminal Court on Thursday sentenced a former policeman to a total of 143 years and four months in prison for raping and molesting an 11-year-old boy over a period of a year in 2016-17.
— Bangkok Post

Government reiterates five measures against drought
The Prime Minister is planning to visit the Northeastern provinces of Surin and Buri Ram as the government is expediting drought mitigation strategies.
— NBT World (video)

Officials warn Thais in Osaka against typhoon
The Royal Thai Consulate-General in Osaka, Japan, has warned Thai citizens in the western region to prepare for Typhoon Krosa, which is expected to hit the island nation’s Pacific coast for at least a couple of days.
— NBT World (video)

How Prayut should take note of Hong Kong crisis
The similarities and differences between the seizures of the Hong Kong and Suvarnabhumi airports by anti-government protesters must have given Prime Minister Prayut Chan-o-cha plenty of food for thought.
— Thai PBS News

Green Line negotiations risk failure
The ongoing negotiations between the Bangkok Metropolitan Administration (BMA) and BTS Group Holdings Plc over proposed concession extensions for the Green Line skytrain service will likely end if the latter refuses to accept the BMA’s conditions, according to an anonymous source.
— Bangkok Post

MPs Dump on Parliament’s Lack of Ass-Blasters in Toilets
Parliamentary debate was derailed Thursday when several MPs took to the Lower House to raise concerns over the toilets in the new Parliament building.
— Khaosod English

Turtle rescued on Nai Harn Beach, Phuket
Today (August 15) at about 1pm, the lifeguard team at Nai Harn Beach rescued a small turtle, which had become stuck in a fertiliser sack.
— The Thaiger

Digital content to reach B33bn
The value of the digital content industry in Thailand this year is expected to reach 33 billion baht, up 10% from 2018 thanks to rising demand for animation and games in the global market as well as business development and promotion by the private sector and state, says the Department of International Trade Promotion (DITP).
— Bangkok Post

Industry Ministry targets raising US investment
The Industry Ministry is being urged to speed up invitations to US companies for future investment in Thailand to benefit from rising trade between Southeast Asia and the US under the Free and Open Indo-Pacific Strategy, says Deputy Prime Minister Somkid Jatusripitak.
— Bangkok Post

Pattaya Mail is now a Fortnightly newspaper
As we venture into our 27th year, the commitment to excellence is even stronger than it ever was. While no-one is ever perfect, nor is any newspaper without its detractors, the Pattaya Mail reinforces our commitment to serve the Eastern Seaboard with truth, honour and integrity.
— Pattaya Mail

Young dugong moved to tank over bad weather fears
Marium the 8-month-old dugong has been taken from the sea and placed in a nursery tank out of concern for her safety, with torrential rain and rough seas forecast for the Andaman Sea.
— Bangkok Post

Drunken tourist rescued at Karon Beach after swimming in red flag area
Earlier today, the Karon Tourist Assistance Centre was contacted by a hotel reporting a tourist who was in trouble while swimming off the beach, near the Naga (snake) statue area.
— The Thaiger