Thailand morning news for May 14 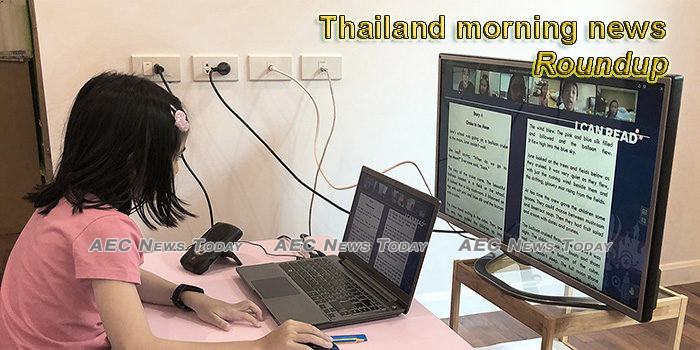 Prayut Says He Prioritizes Health Measures Over Economic Ones
Thailand’s Prime Minister Prayut Chan-o-cha reconfirmed on Tuesday health safety measures will be continually given higher priorities in face of the global pandemic than social and economic ones.
— Khaosod English

Ministry to close handout registration this week
The Finance Ministry plans to close registration for the monthly 5,000-baht cash handout scheme this week as review of appeals submitted by rejected registrants is almost complete.
— Bangkok Post

Phuket government officially requests the opening of land, water and air links
The southern resort island province of Phuket will ask permission from Bangkok to reopen its airport, sea ports and permanent road access to the mainland (Sarasin Bridge) after several days with no new Covid-19 infections detected.
— The Thaiger

PM thanks Thais for making zero new infections today a reality
Prime Minister Prayut Chan-o-cha has thanked the Thai people for their collective efforts in making it possible for Thailand to achieve no new COVID-19 infections today.
— Thai PBS News

THAI’s not yet set to file bankruptcy, says Prayut
Prime Minister Prayut Chan-o-cha has signalled that ailing Thai Airways International (THAI) does not yet need to file for bankruptcy to prevent ruin as the Finance Ministry surveys all rescue options.
— Bangkok Post

CCSA will announce list of businesses, activities that can recommence
Dr. Taweesilp Visanuyothin, spokesman for the Centre for COVID-19 Situation Administration, has announced that the CCSA will likely decide on Friday on a full list of business and leisure activities which will be allowed to resume as part of the second phase of leasing Emergency Decree restrictions.
— The Thaiger

Cabinet okays transfer of B88.45bn from ministries
The cabinet on Tuesday approved a bill to transfer a combined 88.45 billion baht siphoned from the fiscal 2020 budgets of each ministry to be allocated to a central fund to fight the pandemic and rehabilitate the economy.
— Bangkok Post

Zero new COVID-19 deaths or infections reported in Thailand
For the first time since January 13th, when Thailand recorded its first COVID-19 case, no new infections or fatalities have been reported in the country today (Wednesday).
— Thai PBS News

New PTT chief vows rebound
The newly appointed chief executive of state-owned oil and gas conglomerate PTT vows to turn its revenue back to black this year after suffering a considerable first-quarter loss of 1.5 billion baht because of the collapse of oil prices.
— Bangkok Post

Tourism goal raises eyebrows
The Tourism and Sports Ministry is aiming high for 100 million domestic trips within this year, while the private sector plays down this target, saying it will be difficult to meet.
— Bangkok Post

Thailand partners with UN agency to cut CO2 emissions
The Cabinet on Tuesday (May 12) approved a multibillion-baht project with the United Nations to tackle Thailand’s notorious air pollution problem.
— The Star Online

Cabinet approves spending of 4 billion baht to strengthen economy
The Cabinet has approved budget expenditure on a post-COVID-19 economic and social restoration plan which focuses on strengthening the country.
— Newsline (video)

Authority surveys allowed activities due to relaxed measures in Samut Sakhon and Srisaket
Provincial administrations have dispatched officials to inspect various businesses that were allowed to reopen during the first phase of the relaxation of the COVID-19 lockdown restriction before the much-anticipated second phase takes place.
— Newsline (video)

‘Call for truth’ has laser intensity
The Progressive Movement is building up the intensity of its campaigns that exploit the memories of major political events in history in a bid to ignite a mass street protest against the government, according to political scientists.
— Bangkok Post

BAAC asks farmers to submit info online for payouts
The Bank for Agriculture and Agricultural Cooperatives (BAAC) is asking agriculturalists who are eligible for the government’s COVID-19 compensation program for farmers to fill in their information on the campaign’s website, in order to quickly process payment.
— Newsline (video)

Data protection law delay to go before cabinet
A royal decree drafted to postpone the enforcement of most sections in the Personal Data Protection Act (PDPA) by a year will be tabled before the cabinet for approval next week, says the Digital Economy and Society (DES) Ministry.
— Bangkok Post

Thailand: Sugar makers warn of output cut due to drought
Sugar makers in Thailand have warned that another drought could significantly cut into sugar output in the 2020-2021 crop, according to local media.
— Vietnamplus

China donates medical supplies to Thailand
China has provided Thailand with medical equipment and supplies to support the work of health care providers during the COVID-19 pandemic.
— Newsline (video)

Thailand set to reopen tourist sites in Krabi
Thailand’s southern seaside province of Krabi is gearing up plans to clean up the province and restore natural resources so the province can open its door for business.
— The Star Online

Bangkok’s heritage vanishes as urbanization speeds up
Boonsong Chatayatorn, 71, peers out of his dilapidated two-story shophouse at Bangkok’s unsightly urban sprawl. Except for the venerated Buddhist temple next door, he could be looking at almost any major city in Southeast Asia.
— Nikkei Asian Review (paywall)

Death of the beach? Conflict over Songkhla seawall construction
A seawall construction project is in its first phase at Muang Ngam beach in Songkhla Province. The authorities and some local people disagree over the necessity and legitimacy of the project, but it seems that an amendment to the law on Environment Impact Assessments (EIAs) has played an important role in provoking the confrontation.
— Prachatai English

Noble optimistic as infections dwindle
SET-listed Noble Development is maintaining its revenue target and new project launches based on confidence in the government’s handling of the pandemic.
— Bangkok Post

PDPA delay decree going before cabinet
A royal decree drafted to postpone the enforcement of most sections in Personal Data Protection Act (PDPA) by a year will be tabled before the cabinet for approval next week, says the Digital Economy and Society (DES) Ministry.
— Bangkok Post

Spending may shed B4bn due to outbreak
More than 4 billion baht of digital ad spending could dry up in Thailand if the coronavirus pandemic continues to pose a threat, says digital marketing service provider YDM Thailand.
— Bangkok Post

Donations-rich cabbie pays debt to depot owner
A headline-making taxi driver has returned money owed to the operator, who later withdrew a complaint against him that was registered at a police station.
— Bangkok Post

Bacteria Found in Dumplings That Killed One in Samut Prakan
Health officials on Wednesday said they found a strain of bacteria inside dumplings sold by a street vendor after a customer died from what’s suspected to be food poisoning.
— Khaosod English

Korat Uni Plants 3,000 Cannabis For Medical Researches
A university in the northeastern province said Wednesday it has started planting marijuana trees as part of its research on weed-based medicines.
— Khaosod English

Summer Soaker: Weekend thunderstorms to drench Bangkok
Heavy rain and thunderstorms will hit most parts of Bangkok this weekend, but don’t expect relief from the heat.
— Coconuts Thailand

Young student busted for big crimes
The Narcotics Control Board have announced the arrest of an 18 year old student at a private college in Nonthaburi province, just north of Bangkok, for possession of 10,000 ecstasy pills.
— The Thaiger

US indicates FDI support
Michael George DeSombre, the new US ambassador to Thailand, has pledged to support the US private sector moving more manufacturing bases to Thailand, while extolling Thailand’s response to the pandemic.
— Bangkok Post

Workers unite against textile factory over SSF ‘failure’
Textile workers in Nakhon Pathom have petitioned the Labour Ministry to take action against their factory for allegedly failing to pay contributions to the Social Security Fund (SSF), making them ineligible for state financial help.
— Bangkok Post

Most reopening barbers and beauty salons fail to meet standards
About 63% of barber’s shops and beauty salons have failed to meet anti-COVID-19 compliance inspections since the CCSA eased lockdown restrictions on May 3rd.
— Thai PBS News

Movies in a Covid world – The case for the return of the Drive In
One of the industries hard hit by the impact of the Covid-19 outbreak has been the film industry. At both ends the industry has been shuttered – the making of the movies and then the watching of the movies in cinemas.
— The Thaiger

Businesses opening back up, some aren’t following the rules
While restrictions are being lifted, some businesses seem a little too excited about getting back to normal and are letting their guard down when it comes to social distancing and Covid-19 prevention practices.
— The Thaiger

Student Project Seeks More ‘Humane’ Design of Bangkok Prison
A university is working with a prison to help tackle overcrowding and unhygienic conditions that have stalked the Thai corrections system for years.
— Khaosod English

Pho Love of Pandas: Bangkok restaurant now seating diners with stuffed animal companions
All that social distance feeling kinda lonely? Try talking to the panda. A Vietnamese eatery in downtown Bangkok is offering a cuddly solution after restaurants were allowed to seat patrons so long as they keep distant.
— Coconuts Thailand

Thieving monkey safely caught in Chon Buri
A mischievous macaque, aka. rhesus monkey, has been caught after stealing food from local residents in Chon Buri province’s Banglamung district.
— The Thaiger