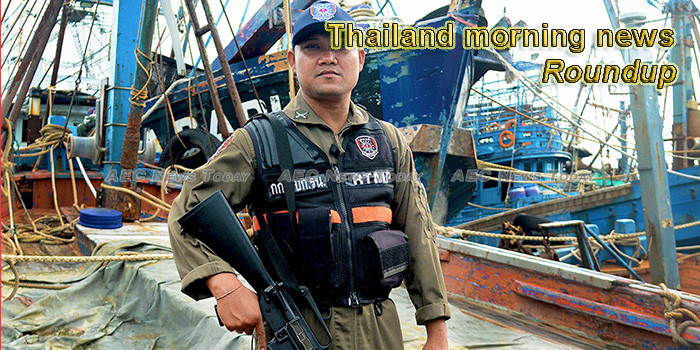 Bank of Thailand to allow biometrics for identification
The Bank of Thailand plans to let banks adopt biometric technology to verify identity when opening deposit accounts by the third quarter this year.
— Bangkok Post

Southeast Asia Doesn’t Want to Be the World’s Dumping Ground. Here’s How Some Countries Are Pushing Back
The global trash trade has reached a turning point; wealthier nations have long shipped their plastic waste to the developing world to be processed, but in recent months, some nations in Southeast Asia have begun sending the exports — much of it contaminated plastic and trash that is unrecyclable — back to where it came from.
— time.com

Phuket safe, dengue growth slows in May amidst soaring fears online
While some media reports are erroneously claiming that the arrival of the monsoon season rains in the past few weeks has seen the number of dengue infections across the country double, the rate of infections in Phuket has in fact fallen.
— The Phuket News

BOT releases April economic and monetary reports
Despite the effects of the trade war, the Thai domestic consumption figures, government investments, and the tourism sector still all perform well; resulting in the continuous growth of the Thai economy in April.
— NBT World (video)

Upgrades tipped as Phuket mulls new town planning rules
The resort island of Phuket is likely to see a wide range of infrastructure upgrades and development as the government is stepping up its efforts to turn the island into Asia’s hub for meetings,incentives, conferences and exhibitions (Mice), according to Thapana Boonyapravit, president of the Thai Association for Town Planning.
— Bangkok Post

Thailand’s Maya Bay settles into an extended period of rest – VIDEO
You can look but you can’t touch. Maya Bay’s beach, closed last year to allow coral restoration and beach recovery, is likely to remain closed to visitors for many years, even up to five.
— The Thaiger

CONSTRUCTION MARKET IN THAILAND – FORECAST 2018 – 2023
The report covers the present scenario and the growth prospects of the construction market in Thailand for 2018-2022. To calculate the market size, the report presents a detailed picture of the market by way of study, synthesis, and summation of data from multiple sources.
— marketmirror24.com

April economic and monetary reports (BoT)
Despite the effects of the trade war, the Thai domestic consumption figures, government investments, and the tourism sector still all perform well; resulting in continuous growth of the Thai economy in April.
— www.thailand-business-news.com

500 account holders fall prey to scamsters in Thailand
A reward of THB500 to THB2,000 (RM66 to RM263) was promised to locals, especially those in the rural areas to open new bank accounts.
— borneobulletin.com.bn

Democrats head for key meeting this week
The Democrat Party will call a meeting this Tuesday (June 4) to determine the party’s political direction before the two parliamentary houses vote on the appointment of a new prime minister on Wednesday.
— Pattaya Mail

Transformer blast likely caused fire at Chatuchak market
An explosion in an electrical transformer inside Chatuchak market could be behind a fire that hit the world-famous emporium on Sunday night, police said on Monday.
— Bangkok Post

Strong headwind slows growth
Major Thailand-based airlines have set modest goals for themselves by looking closer to home for a risk-limiting expansion, as the International Air Transport Association (IATA) announced a downgrade of its 2019 outlook for the global air transport industry and a decline on 2018 net post-tax …
— Bangkok Post

Recent instances of elephant injuries illustrate harms of tourism industry
Elephants have long been a source of human fascination and admiration. The species is vastly intelligent, social and emotional, capable of activities previously believed to be unattainable to non-humans such as grieving the dead.
— earth.com

Thailand is Falling Behind in Efforts to Eliminate Plastic Waste
“Ending Plastic Pollution” has been set as the theme for World Environment Day on June 5, but Thailand is falling behind Asian and European countries in the fight against plastic waste.
— Chiang Rai Times

By a thread: Thai Muslim family keeps silk weaving heritage alive
Over the click-clack of the teak loom, Niphon’s family laments the lack of apprentice weavers at his Bangkok silk shop, as modernity lures young Muslims away from a trade their community has dominated for generations.
— The Jakarta Post

Digital-business expo
Commercial beginners and merchandisers are invited to learn how to prepare themselves for the digital-business era during the E-Biz & OEM Manufacturer Expo 2019, which will take place at Bitec Hall 106, Bang Na-Trat Road, from Thursday until Saturday, 10am-6pm.
— Bangkok Post tech

Thailand as Asian Playground for Russians?
Europe is the top growing source for the Asia-Pacific, and it’s not because of growth from Asia’s traditional European markets such as the United Kingdom. It’s because of a huge spike in Russian arrivals. And Vietnam benefits.
— skift.com

Thailand welcomes investment relocation from China, Japan
The Thai government has ordered the Board of Investment (BoI) to actively attract foreign investors who plan to move out of China, especially Japanese ones hit by the US – China trade war.
— Vietnam+

Taste of Thailand returns to Warwick
The town’s 15th annual Thai Festival, organised by Warwick Rotary Club, was held at the racecourse on Saturday and Sunday (June 1 and 2).
— Leamington Observer

MICE Thailand Signature invites overseas delegates to maximise their spending and extend stay in Thailand
Thailand Convention and Exhibition Bureau (TCEB) – Business is inviting event delegates to get more out of every visit with its new “MICE Thailand Signature” campaign that offers exclusive privileges and special discounts to MICE travellers coming to Thailand.
— ITCM

This year’s Hotel Art Fair, themed ‘Breaking Boundaries,’ will run at W Bangkok in June
Returning for its sixth run in our city, the annual Hotel Art Fair will be back in Bangkok later this month with a free-to-enter exhibition showcasing a diverse selection of works by local and international artists.
— Coconuts (paywall)

Bangkok Insurance Brokers Pushes for Healthcare Policy for “All Foreign Retirees” in Thailand
As the debacle over mandatory health insurance for expats staying in Thailand on Non-Immigrant O-A “Retirement” visas continues to unfold, Bangkok Insurance Brokers Co Ltd (BIB) Managing Director Eric Dohlon, based in Phuket, is continuing his push for healthcare policy coverage for all retirees in Thailand – and he is making good progress.
— Chiang Rai Times

Concern over yoga teacher’s poses at sacred sites in Thailand
A Mexican yoga teacher from Canada is being criticised for photos she posted on Instagram showing her going through yoga exercises in sacred places in Thailand, including in the Emerald Buddha Temple.
— Asia One

PM leads Thai people in merit-making for HM the Queen on her birthday
Prime Minister Prayut Chan-o-cha led cabinet ministers and their spouses, government officials and members of the public in making merit by presenting alms to 410 monks at Sanam Luang this…
— Thai PBS News

Driver fined for luring passengers onto packed bus
A bus driver has been fined 5,000 baht for packing too many passengers into his vehicle, forcing customers who had bought tickets for seats on the bus to sit in the aisle and on the stairs.
— Bangkok Post

New leadership for the digital workplace
In a world that is increasingly becoming digitised, there is a sense of urgency about revamping the way we do things; we can no longer rely on the same old ways.
— Bangkok Post