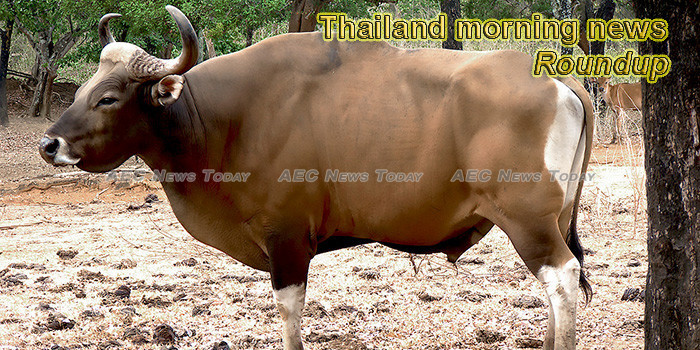 66 NCPO orders revoked in latest issue of Royal Gazette
The recent issue of the Royal Gazette has announced the revocation of 66 instructions imposed by the National Council for Peace and Order (NCPO) via Section 44 of the interim constitution. The revocation took effect immediately.
— NBT World (video)

Thai produce shipments to China rising
The Trade Negotiations Department says shipments of fruits and vegetables to China rose by 31% year-on-year to US$1.2 billion in the January-May period, boosted by the Asean-China Free Trade Area.
— Fresh Plaza

Business leaders slash growth forecast, call for rate cut
Three leading business associations slashed their 2019 economic growth and export forecasts on Wednesday, and urged the central bank to cut interest rates to slow the strengthening of the baht, which this year has risen more than other Asian currencies.
— Bangkok Post

Thailand’s Dengue Fever infections highest in five years
The Thai Bureau of Epidemiology, at the Department of Disease Control, reports that there have been 44,671 cases of dengue fever reported in the country, the highest number in five years, indicating that there have been 67.62 dengue patients in every 100,000 of the Thai population, which is 1.6 times higher than last year.
— The Thaiger

Beaten Up, Used as Mosquito Buffet: Freshman Spills on Latest SOTUS Hazing
A freshman and her parents have filed a police complaint against senior students who hazed her class by kicking students until they bruised, and splashing them with water and dirt to encourage mosquito bites.
— Khaosod English

World’s First Truly Elephant Friendly Camp Opens for Business in Thailand
In 2017, World Animal Protection, along with various travel industry leaders, presented a business case to a group of about 15 elephant camps in Thailand.
— Travel Pulse

Pattaya – 30% down this year, European tourist drop-off
The strength of the baht, rising tourist locations elsewhere around the region, fickle tourists has seen a demographic shift in Pattaya’s tourists and what they are doing during their visits.
— The Thaiger

It’s not how Cabinet looks; it’s how Prayut formed it
Prime Minister Prayut Chan-o-cha may have taken one step closer to the brink with the Cabinet he has set up.
— Thai PBS News

Foreign aircraft maintenance investors to be set conditions
A royal decree will be issued to lay down conditions for foreign parties wanting to set up maintenance, repair and overhaul (MRO) operations in Thailand, according to the Civil Aviation Authority of Thailand (CAAT).
— Bangkok Post

2020 tourism marketing plan aimed at generating 10 % more revenue
The Tourism Authority of Thailand (TAT) has set a target for Thailand’s tourism revenue growth by 10 percent in 2020 and will ensure that the socio-economic benefits of international and domestic tourism are spread right across the country.
— NBT World (video)

Heatstroke concerned among Thai doctors during Hajj pilgrimage
Doctors have voiced their concerns over Thai pilgrims in Saudi Arabia catching heatstroke, as they have to face the scorching temperature of 46 degree Celsius during the day in Medina.
— NBT World (video)

Citi sees firm baht through year-end
The baht’s value is likely to remain firm until the beginning of 2020 amid a weaker dollar and expectations of US monetary stimulus, says Citi Thailand.
— Bangkok Post

TDRI gives mixed ratings to government’s performance in digital economy policy
The outgoing government of Prime Minister Prayut Chan-o-cha has made some achievements and, at the same time, failed in its policy to drive Thailand toward a digital economy over the past five years, according to an assessment by Thailand Development Research Institute (TDRI).
— Thai PBS News

EU-Vietnam trade deal prompts concern in Thailand
On June 30 in Hanoi, Vietnamese and EU officials signed a new free trade deal that could shift the balance of manufacturing in the region.
— Asean Today

Thai smartphone users prepared for 5G
A recent survey of 35,000 people around the world reportedly shows that there will be as many as 1.9 billion 5G subscribers globally in the next five years.
— OpenGov Asia

Thammanat says he was innocent
A new deputy agriculture minister has dismissed reports about his past criminal record, claiming he was innocent and the opposition was trying to discredit him.
— Bangkok Post

Somkid says new Thai Government will speed up stimulus spending as growth falters
Somkid Jatusripitak, a day after being officially announced as a Deputy PM and head of the finance ministry, says he will speed up investment in key infrastructure projects to boost the country’s growth rate to 3.5% for the rest of 2019.
— The Thaiger

ERC stands pat on fuel tariff rate
The Energy Regulatory Commission (ERC) on Thursday approved the continuation of the fuel tariff (Ft) rate of 3.64 baht per kilowatt-hour for September-December, the third period of 2019.
— Bangkok Post

Joint Drill With US Won’t Upset China, Prawit Says at ASEAN Summit
An upcoming naval exercise between the Asean community with the United States will have no impact on the group’s relations with China, defense minister Prawit Wongsuwan said Thursday.
— Khaosod English

Arrested man had 37 guns
Police investigating a complaint of shots being fired at night in a village discovered a mini-arsenal when they searched the suspect’s house in Muang district on Wednesday.
— Bangkok Post

Thailand’s Foreign Ministry holds e-Consular seminar
The Ministry of Foreign Affairs of Thailand has held an e-Consular seminar for its consulate officials in countries around the globe, as many are set to increase visa-free travel for Thai passport holders.
— Vietnamplus

Thailand’s Tham Luang Cave sees influx of tourists a year after daring rescue | Video
It’s been a year since 12 boys and their football coach were rescued from the Tham Luang Cave in northern Thailand, after getting trapped.
— CNA (video)

Chiang Mai to open new 1.44 hectare public park on Charoen Prates Road
City staff are reported to be working hard on landscape improvements, including the planting of large trees, in an area to be named “Charoen Prates Park” when the renovations  are complete.
— Thai PBS News

Phuket’s looming high season water crisis
Water shortages are almost a certainty for Phuket in the next high season with the rainfall for this year’s wet season well below average.
— The Thaiger