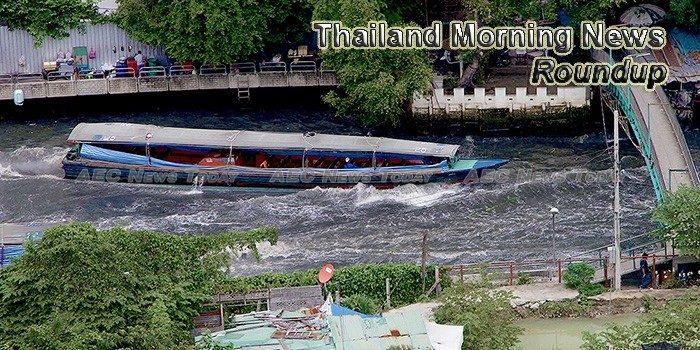 BOT signs agreements with Philippine, Malaysian central banks
The Bank of Thailand (BOT) has signed a letter of intent to enter a bilateral agreement between Thailand and the Philippines under the Asean Banking Integration Framework (ABIF), and also signed a memorandum of understanding with Bank Negara Malaysia on banking supervision and financial-development cooperation.

Thai students still lag the rest
The education system in Thailand has failed to equip its students with crucial skills for the 21st century job market such as critical thinking, problem-solving and foreign language proficiency due to its educational culture, according to Crimson Education Thailand, a consulting company that helps Thai students win entry to the world’s elite universities.
– Bangkok Post

In Thailand, blood sacrifice is out. Strawberry Fanta is in
There are no official guidelines for maintaining a serene Thai home. But if there were, they might include the following rules.
— PRI

Buying tanks won’t get us to Thailand 4.0
Finally, the Thai army is to get 10 Chinese made VT-4 tanks worth over two billion baht.
— Bangkok Post

His Majesty the King signs constitution
His Majesty King Maha Vajiralongkorn Bodindradebayavarangkun has signed Thailand’s 20th constitution, starting the clock ticking for a general election to be held in late 2018 at the latest.
– Bangkok Post

Thailand is best for online brand safety
Thailand has the safest online advertising environment in Southeast Asia as well as offering the highest rate of viewable ads across both display and video, according to a new study.
— Warc

FX in Thailand: FinanceFeeds investigation – Arb traders, High Net Worth retail customers and how to succeed post Boston and Fortress damage
Thailand is now home to highly analytical traders with $100,000 minimum deposits. Here is what they are looking for in a broker.
— Finance Feeds

Thailand Offers Golden Visa To Brexit Weary Expats
If Brexit is too much for you and you are worried about your status as a British expat in Europe, then Thailand is offering a new home.
— Money International

S-Curve industrial estate mulled
The Industrial Estate Authority of Thailand (IEAT) will do a joint study with the Federation of Thai Industries (FTI) on the development of an industrial estate for a “new S-Curve” industry.
– Bangkok Post

Vans operating on Thai-Lao border fully comply with traffic laws
Ahead of the Songkran Festival, all vans operating across the Thai-Lao Friendship Bridge in Nong Khai have been improved to meet safety requirements.
– NNT