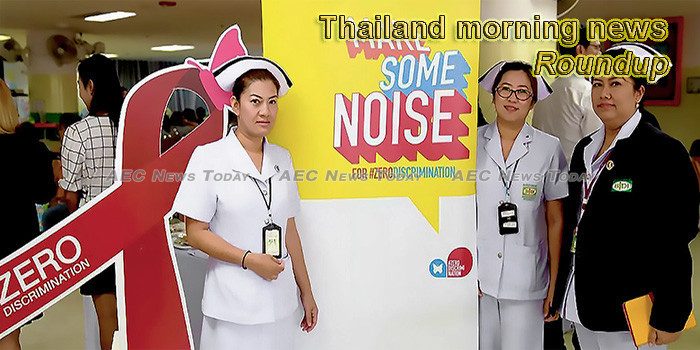 Exports down 5.7% in January
Exports dropped for a third straight month in January, falling a more-than-expected 5.6% from a year earlier, the Commerce Ministry said on Friday.
— Bangkok Post (annoying popups)

Sugarcane burning continues in Korat
Burning of sugarcane fields has continued in this northeastern province despite a provincial police announcement that farmers burning sugarcane would face legal action and a campaign against the practice launched by the provincial governor.
— Bangkok Post (annoying popups)

11 charged over hoax news stories
Eleven people have been arrested and charged with posting and spreading false information about the military conscription period being extended from two to four years, according to the Technology Crime Suppression Division (TCSD).
— Bangkok Post (annoying popups)

NLA to stop work on May 23
The military-appointed National Legislative Assembly will officially remain on the job until May 23, nearly two months after the election and a day before the new parliament is expected to convene.
— Bangkok Post (annoying pop-ups)

B1bn in assets seized in fraud, loan shark busts
Police have arrested 14 people wanted for public fraud and illegal lending and seized assets worth almost one billion baht during raids on 82 locations in Bangkok and 10 other provinces.
— Bangkok Post (annoying pop-ups)

“New drug laws don’t legalise unlicensed marijuana cultivation”
Thailand’s Food and Drug Administration (FDA) has rushed to clarify that the new narcotics law does not legalise the unrestricted planting of marijuana in an apparent response to the Bhumjai Thai political party’s manifesto pledge to legalise marijuana cultivation.
— The Thaiger

Policing Islamic schools to secure the state
Immigration Bureau (IB) is planning to meet representatives from more than 600 privately-run Islamic schools — ponoh — in Yala, Pattani, Narathiwat, and Songkhla, after reports emerged that hundreds of Cambodian students have been studying illegally in the schools.
— Bangkok Post (annoying popups)

Thai Election: Four Emerge as Top Hopefuls for PM
Buddhist-majority Thailand is scheduled to hold national elections on March 24, the country’s first general polls since a military coup in 2014. Political analysts say there are four names to look out for as leading potential contenders for the prime minister’s role:
— Benar News

Race to Become Prime Minister of Thailand Is a Man’s World
Men dominate the list of candidates for prime minister in Thailand’s first general election since a military coup in 2014, even though women outnumber them in the population as a whole.
— Bloomberg

Democrat Party urge majority rule
Democrat Party leader Abhisit Vejjajiva on Saturday called on political parties to make sure the mechanism of majority rule is observed in the prime ministerial vote and in the formation process of the next coalition government.
— Bangkok Post (annoying pop-ups)

Wildlife plan sees footprints of success
With the construction of Highway 304’s wildlife corridors still underway, a survey has found wildlife footprints on top of the traffic tunnels, proving that animals are now adjusting to the presence of the corridor and are able to cross over the road with more safety.
— Bangkok Post (annoying pop-ups)

Battle lines drawn over pesticide use
A GROUP of academics is preparing to fight for a total ban in two years on three agrochemicals deemed a threat to public health.
— The Nation (very annoying popups)

Phuket City mulls water restrictions, again
Despite issuing orders for odd/even water restrictions, and then rescinding them the day after, the Phuket City Municipality is again urging residents to take care in the use of their tap water to stretch the available water supply through to the end of the dry season, …
— The Thaiger

Thailand’s elephants say goodbye to the circus – and a life of cruelty
Many of the elephants in Thailand live in appalling conditions, but a UK charity has rescued some and returned then to their forest homes, and tourist stays are helping the project to grow
— The Guardian

EEC: The Business Opportunity You Shouldn’t Miss in 2019
ince late 2018, we have already seen signs of global economic slowdown. Financial markets have been fluctuating. Among the factors are the downshifting of the US economy which led to weakened US dollar. The prolonged US-China trade war has troubled Thai exports for quite sometime.
— Bangkok Post (annoying popups)

Tobacco chiefs slapped down over commercial weed plans
The Tobacco Authority of Thailand (TAT) can apply for a licence to grow cannabis but it will not cover any kind of commercial use, according to the Food and Drug Administration (FDA).
— Bangkok Post (annoying popups)

A quiet revolt: Female monks work to undo Thailand’s 90-year ban
It’s 4am and the odd rooster is crowing in the cool hours before day breaks and three saffron-robed monks from the all-female Songdhammakalyani Monastery are making their way through the back streets of Nakhon Pathom, 56 kilometres east of Thailandʼs capital Bangkok.
— The Sydney Morning Herald

Scum of the Earth
At the Bangkok Post Forum on Feb 7, Future Forward Party leader Thanathorn Juangroongruangkit said it would be splendid if Thailand had green shirts with four stars who favour democracy.
— Bangkok Post (annoying popups)

TATs “The Seasons” documentary series inspires responsible tourism
The Tourism Authority of Thailand (TAT) is seeking to inspire environmental, cultural and social awareness among locals and visitors alike by placing responsible tourism at the heart of “The Seasons” travel short documentary series with 12 episodes uploaded and available for viewing on the TAT Newsroom from now until October 2019.
— AEC News Today/ PR Newswire (media release)

FTI asks delay on electronic waste bill, fearing exodus
The Federation of Thai Industries (FTI) will call for the National Legislative Assembly (NLA) to delay a decision on an electronic waste disposal bill by a further 45 days, arguing that the new bill will cause factories to relocate from Thailand and jeopardise 753,357 jobs in the industry.
— Bangkok Post (annoying popups)

Rain-making efforts will continue until end of month in Khon Kaen
The Northeastern Royal Rainmaking Operation Centre is extending the royal rainmaking operation period, as part of air pollution reduction efforts, until the end of February.
— The Thaiger

Shy turtles goosed along into sea off Phang Nga
Thirty-five newly hatched leatherback turtles reluctant to leave their nests on Phang Nga’s Ta Sai Beach were given a hand finding their way to the sea on Sunday morning.
— The Nation (very annoying popups)

City trip speeds up road death probe
After Akkarawat Muen-aram, 17, received no news about the police investigation into the death of his father nine months ago his aunt, Suthada Muen-aram, 50, decided the boy’s life had been put on hold long enough.
— Bangkok Post (annoying popups)

PM receives artifacts as national treasure from individual donor
Prime Minister Prayut Chan-o-cha presided over the handover ceremony of 104 artifacts given to the authorities as a national treasure from an individual donor, Thammarit Jira The PM said the government was delighted to receive the precious items which will be beneficial to …
— Pattaya Mail

Rescuers slam local police for lack of response after body found in Chao Phraya
The Rama VII Bridge in Bangkok has long been a location where people have jumped to their death.
— The Thaiger

PepsiCo expands ‘healthy’ drinks portfolio
PepsiCo Services Asia Ltd, the marketer of Pepsi, Mirinda and 7 Up, is looking to enlarge its portfolio of healthier products as part of Pepsi-Cola’s 10-year strategic plan, in line with the government’s low-sugar policy.
— Bangkok Post (annoying popups)

Urban sprawl has killer consequences for residents
Living in cities like Bangkok poses unique risks from which rural dwellers are spared. For example, urban residents face the risk of being caged inside fire-stricken buildings or the possibility of an accident on mass transit.
— Bangkok Post (annoying popups)

New recycling plan taps energy fund
The government has agreed to use the remaining cash from the Energy Conservation Fund to support a new recycling plan for discarded solar panels and vehicle batteries, in line with the goal of creating a circular economy.
— Bangkok Post

Activist wants Thanathorn probe over ‘false’ biography
Srisuwan Janya, secretary of the Association for the Protection of the Constitution, said on Sunday he will submit a petition to the Election Commission, calling for the agency to investigate whether Future Forward Party leader Thanathorn Juangroongruangkij has violated the election law after inaccurate information in his biography was published on the party’s website.
— Bangkok Post (annoying pop-ups)

Bahrain, Thailand to boost jewellery sector
Top businessmen from Bahrain are participating in the Bangkok Gems and Jewellery Fair that got off to a royal start with Princess Sirivannavari Nariratana opening the 63rd edition of the Fair.
— The Daily Tribune

Rayong raise awareness of Thailand’s chairmanship of ASEAN
The eastern province of Rayong is hosting an exhibition to inform local people about Thailand’s assumption of the ASEAN chairmanship.
— Pattaya Mail

Wai Khru – setting a bad example for the future. Thailand’s demand for respect from its young
Hazing (US English), initiation ceremonies (British English), bastardisation (Australian English), ragging (South Asia), or deposition, refers to the practice of rituals, challenges, and other activities involving harassment, abuse or humiliation used as a way of initiating a person into a group …
— The Thaiger

One injured in China Town building blaze
Authorities on Sunday morning cordoned off a five-storey building in Bangkok’s China Town after a fire raged through it and injured a man.
— The Nation (very annoying popups)