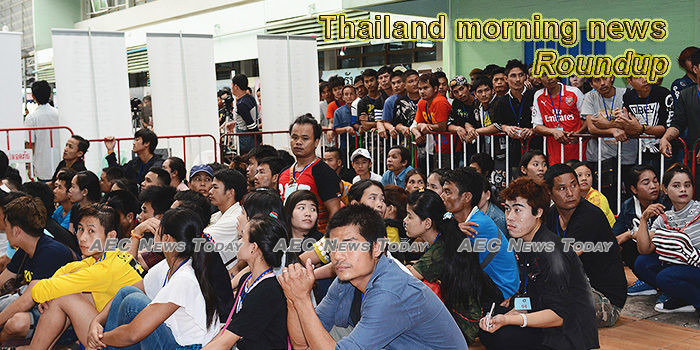 Thailand begins to prepare for a move to 5G technology, auction to be held next year
With the National Broadcasting and Telecommunications Commission (NBTC) having started 5G testing, the government is confident that a 5G spectrum licence auction will be held next year.
— The Pattaya News

Campaigners Bare Plans to Challenge Prayuth’s Regime in 2020
Charter amendment, ending military conscription, and encouraging young opponents of the Prayuth Chan-ocha administration to come out in force on the streets are key issues that pro-democracy camp hopes to push for in 2020.
— Khaosod English

Thai Airways presents new recovery plan for board approval
Thai Airways president Sumeth Damrongchaitham says the national carrier will submit a 2020-2025 rehabilitation plan to the Board of Directors in January, with a separate purchasing plan for new aircraft also being put forward.
— The Thaiger

Govt eases fishing regulations after protests
Commercial fishermen across Thailand have decided to end their protests after the government pledged to assist with problems which they believed stemmed from measures taken to curb Illegal, Unreported and Unregulated (IUU) fishing.
— Bangkok Post

Asia has longest working hours but least productive and healthy
Workers in Asia are known for their hardworking ethics which have contributed to its miraculous economic rise.
— HRM Asia

Govt pressed over land grab payouts
Transport officials are racing against time to pay compensation to several hundred villagers to end a year-long conflict over the expropriation of their land for the construction of the Bang Yai-Kanchanaburi motorway.
— Bangkok Post

Officers in shooting ‘mistake’ to surrender
Fourth Army Region commander Pornsak Poonsawat said that security officers who shot dead three civilians “by mistake” have been ordered to turn themselves in on Thursday.
— Bangkok Post

Purged FFP MP vows to keep her seat
Srinual Boonlue, a Future Forward Party MP for Chiang Mai who was recently expelled from the party for defying the party, said she has no intention to relinquish her MP status.
— Bangkok Post

Rabies poses a painful problem in Thailand
As the winter months drive foreigners from their chilly homes in the West to the attractions of Thailand, more and more people are returning home a bit traumatized from visiting the tropical paradise.
— Asia Times

Thailand BOI Approves Revised Incentives to Promote Investment in the EEC Area
The Board of Investment (BOI) has agreed to extend and revise the investment incentives package for investment projects in the Eastern Economic Corridor (EEC).
— PR Newswire (media release)

‘Ripper’ claims ‘fit of rage’ led to murder
Police are not convinced serial killer Somkid Pumpuang did not plan to murder a 51-year-old Khon Kaen woman, after he confessed to the crime on Thursday.
— Bangkok Post

Anti-dumping shields for steel renewed
The government has extended the anti-dumping duty on cold-reduced carbon steel, both coiled and uncoiled, from China, Vietnam and Taiwan for the next five years to curb supply from the three markets.
— Bangkok Post

Bangkok’s balancing act: Is Thailand really in lockstep with China?
Last month in Bangkok, after meeting with Chinese Premier Li Keqiang, Thai Prime Minister Prayuth Chan-o-cha compared Thailand to an ant and China to a lion: “A tiny ant can sometimes help a big lion or elephant.”
— Asean Today

University gets US funding to preserve Lanna architecture
The United States on Wednesday granted US$150,000 (4.5 million baht) to Chiang Mai University’s Centre for the Promotion of Arts and Culture to conserve traditional Lanna architecture in the northern province.
— Bangkok Post

Thailand: TV stations join no single-use plastic bags campaign
The Department of Environmental Quality Promotion (DEQP) of Thailand has signed an agreement with eight TV stations to discourage the availability of single-use plastic bags by censoring scenes showing the bags in programmes, while major shops and stores will officially discontinue offering these bags from January 1.
— Vietnamplus

New Years Travellers Warned to Arrive 3 Hours Early to Airport
Immigration will deploy staff at all counters to ease passenger congestion. The immigration offices will work with the airport agency and airlines to assist travelers to get through immigration as quickly as possible.
— Chiang Rai Times

Temporary Thai Tsunami Orphanage Becomes a Permanent Home
An orphanage in southern Thailand has been Watana Sittirachot’s home since 2004, when a deadly tsunami killed hundreds of thousands of people, including many of his family members, in one of the biggest natural disasters in recent history.
— The New York Times

Govt plans to hold auction for 5G operation licenses next year
The government is confident that a 5G spectrum licence auction will be held next year, as it recognizes the importance of the 5G technology in the digital era.
— Newsline (video)

An Giang province hosts Vietnam-Thailand trade fair
Thousands of consumer goods made in Vietnam and Thailand are being exhibited at a trade fair in Long Xuyen city in the Mekong Delta province of An Giang.
— Vietnamplus

Activists propose amendments to same-sex marriage bill in Thailand
Activists from Togetherness for Equality and Action are broadening their push for an amendment to the Civil and Commercial Code that would to allow people to legally marry, regardless of gender or sexual orientation.
— The Thaiger

Why is Thailand’s PropTech market so valuable…
The explosive growth in the economy has now placed Thailand as the second largest economy in Southeast Asia.
— The Thaiger

Isaan human rights defenders between fight or flight
Over 300 people gathered at Ubon Ratchathani University on Monday to discuss the state of human rights in the Northeast and the country.
— Isaan Record

Austrian man arrested in Pattaya on one day overstay and doing a bill runner at local hotel
Chonburi immigration acted on a warrant issued by the Pattaya court yesterday and arrested a 60 year old Austrian.
— The Pattaya News

High school class closed for a week after fatal shooting
A class at a high school in Nonthaburi province, near Bangkok, has been suspended until December 23rd after a student shot one of his peers dead in the classroom yesterday…
— Thai PBS News

Review: Unanswered Questions At King Taksin’s Old Palace
Visiting the royal residence of King Taksin the Great would remind Thais of many unsettled questions from the bloody history.
— Khaosod English

Thai tourism officials hire fortune teller (it’s not what you think)
A celebrity fortune teller has been engaged to promote the “Positive Energy” campaign being run by the Tourism Authority of Thailand to promote domestic tourism.
— The Thaiger

15 years on, a look back at the Boxing Day tsunami
Dec 26 marks 15 years since a 9.1 magnitude quake off the coast of Indonesia’s Aceh province triggered a tsunami that killed more than 230,000 people in Indonesia, Sri Lanka, India, Thailand and nine other countries.
— CNA

Thailand morning news for May 4