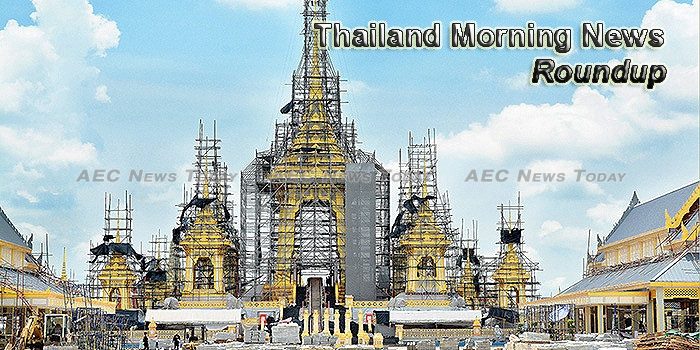 Thai investors advised to penetrate CLMV market
The Board of Investment of Thailand (BOI) has encouraged Thai entrepreneurs to consider expanding their market overseas, particularly to the CLMV countries.
— NNT

Thailand emerges as surprising bond-flow magnet
In a sign of how the flood of money into emerging markets is upending conventional wisdom, military-run Thailand with a credit rating just three levels above junk at Moody’s Investors Service has become a favoured low-yielding destination for bond investors.
— Bangkok Post/ Bloomberg

13 ex-PAD core leaders to compensate AOT 522 million baht for airports’ shutdown
Thirteen former core leaders of the People’s Alliance for Democracy (PAD) will have to collectively pay the Airports of Thailand Public Company 522 million baht in compensation plus 7.5 interest thereon for their liability in closing down the Suvarnabhumi and Don Mueang international airports during their protests in 2008.
— Thai PBS

Army ready for blimp investigations, Prawit says
The army is prepared for any investigations that may be carried out into its controversial 340-million-baht aerial patrol project, Deputy Prime Minister and Defence Minister Prawit Wongsuwon said Thursday.
— Bangkok Post

Home loan approvals break target on high economic confidence
Commercial banks have reported better-than-targeted growth in home loans during the first half of the year on the back of steady economic recovering bolstering public confidence.
— NBT World (video)

Trafficking, debt bondage rampant in Thai fishing industry, study finds
More than a third of migrant fishermen in Thailand clearly were victims of trafficking over the past five years and even more workers in the industry were possibly trafficked as well, according to a report published on Thursday.
— Reuters

Buddhism office officials allegedly took Bt300m from temple subsidies
SENIOR OFFICIALS at the National Buddhism Office and their accomplices are accused of siphoning off more than Bt300 million from state subsidies for 30 temples in recent years, according to investigations.
— The Nation (annoying popups)

Security at Hua Hin to be stepped up for high season
As the high season for tourism at Hua Hin in Prachuap Khiri Khan province has set to begin in October, the provincial police will step up security measures, including use of helicopters for rescue operations along the coastline, Pol Maj Gen Angkul Klaiklueng says.
— Thai PBS

Energy Ministry boasts its success at Astana Expo 2017
The Ministry of Energy celebrated the success of Thailand Pavilion in the Astana Expo 2017 as the number of visitors rose beyond expectation.
— NBT World (video)

Thailand events calendar for end of Buddhist Lent or Ok Phansa
A busy time on the Thailand events calendar, the Ok Phansa festival is celebrated on the full moon of the 11th lunar month or October and marks the end of the Buddhist Lent. It is a time of celebration and merit-making with different events and activities held throughout the country in different provinces.
— TAT News