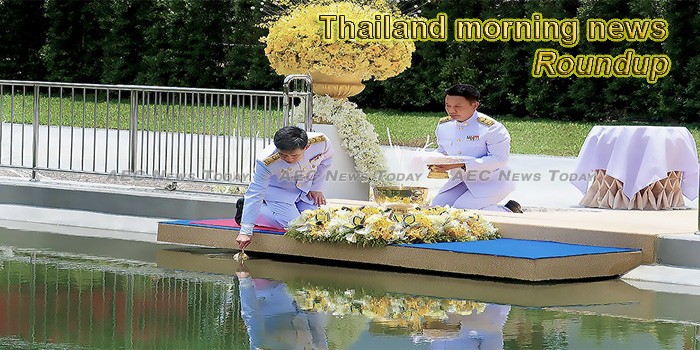 Industry Ministry plans end to sugarcane burning in three years
The Ministry of Industry will propose to the Cabinet a plan to end within three years sugarcane farmers’ widespread practice of cane burning before harvesting which is largely blamed for smog problem in many areas.
— Thai PBSWorld

Thailand ramps up fight against forced labor with stricter law
Thailand will use a newly amended law to crack down on forced labor with hefty fines and prison time, a move analysts said could help curb exploitative practices against migrant workers.
— Reuters

The red tape is killing us, not the haze
It took the South Korean government just one day to declare a national emergency before containing the huge wildfires that threatened to engulf the country’s northeastern coastal area this week.
— Bangkok Post

No hidden motive behind Daycha charges, says ONCB
The Office of Narcotics Control Board has denied any business motive behind the marijuana-related charges on the Khaokwan Foundation chairman and his associate.
— Bangkok Post

Transport Co plans 9,000 bus trips a day from Bangkok for Songkran
The state-run Transport Company will increase its bus and passenger van services by 3,000 to 9,000 trips per day from April 10-13 to accommodate the sharp rise in the number of passengers expected to travel out of Bangkok ahead of the Songkran holiday.
— Thai PBS World

Against the tide: Thai ‘floating temple’ defies coastal erosion
As sea waters slowly rose around his temple and his neighbors fled inland, Thai abbot Somnuek Atipanyo refused to budge and is today a symbol of the fight to restore the country’s fast-eroding coastlines.
— Coconuts (paywall)

Surachate reports to the Royal Thai Police HQ
Surachate “Big Joke” Hakparn, you know, the guy who’s been in our news almost every day for the past year, has reported to the RTP HQ today, but soon after was seen leaving the building.
— The Thaiger

No hidden motive behind Daycha charges, says ONCB
The Office of Narcotics Control Board has denied any business motive behind the marijuana-related charges on the Khaokwan Foundation chairman and his associate.
— Bangkok Post

Car orders accelerate at Bangkok motor show
The latest edition of the Bangkok International Motor Show has concluded with a rise in car orders, but a drop in deposits placed for motorcycles.
— Bangkok Post

Good Shepherd calls for supplies for families at risk in Phuket
The ‘Home for Hope’ mobile bus goes into migrant work camps within the Cherng Talay and Bang Tao areas once a month, providing My­anmar migrant workers and their fami­lies, as well as poor Thai families, with essentials to improve their health and well-being.
— The Phuket News

This micro-cinema in Bangkok is run by Thailand’s “most banned filmmaker”
A welcoming atmosphere greets anyone who steps into this Bangkok micro-cinema. With its brise soleil features, pockets of lush garden and open spaces, it evokes both nostalgia and an aura of openness–and yet Cinema Oasis was born because a door had been slammed shut on its propretor’s face.
— ABS-CBN News

Skinny ‘Real-life Dumbo’ filmed at Phuket Zoo performing tricks for tourists
PHOTOS: Moving Animals The Phuket Zoo has again been exposed as a below-standard attraction where the inmates appear to be often mistreated, defying modern international standards and conventions for zoos.
— The Thaiger

No action on illegal construction at Ao Sane luxury villa as deadline passes
The contractor of a luxury villa project at Ao Sane, on the coastal road north of Nai Harn Beach, has failed to make any corrections to the project after being given 30 days to remove the parts of the building that exceeded the building permit.
— The Phuket News

AirAsia plans to turn website into online mall for travellers
AirAsia, whose website is used by 65 million customers every month, is considering a plan to sell tickets of non-competing carriers on airasia.com, using its size to give online travel agents a run for their money.
— Bangkok Post

Industry Min prepares measure to cope with sugar cane burning
The Ministry of Industry plans to submit a measure to the cabinet that would lead to sugarcane growers being prevented from burning their crops.
— Pattaya Mail

Baby elephant being moved to specialised care after falling in drain
Officials have relocated a baby elephant rescued from a drain in a Bueng Kan village on the weekend to a wildlife protection facility to receive treatment for an infection.
— The Thaiger