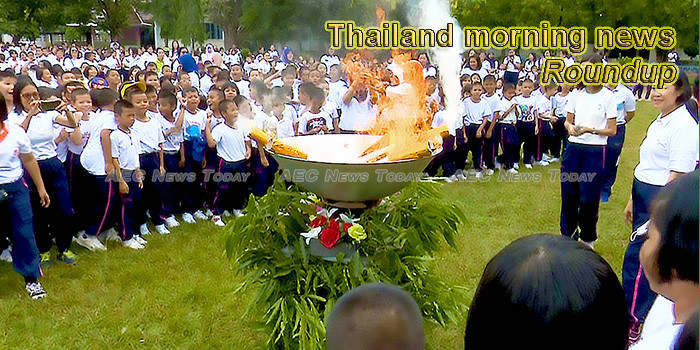 Thai statesman General Prem dies at the age of 98
President of the Privy Council General Prem Tinsulanonda died this morning of heart failure at Phra Mongkut hospital. He was 98 years old. General Prem was rushed to hospital…
— Thai PBS News

Thais could gain from US tariffs
Thailand is expected to gain more than it loses if the US slaps tariffs of up to 25% on an additional list of Chinese imports worth US$300 billion, according to a study by the Commerce Ministry’s planning unit.
— Bangkok Post

PCD officials search for source of chemicals after fire at Laem Chabang port
Pollution Control Department officials are investigating the cause of the chemical fire on board a freighter at Laem Chabang deep-sea port in Thailand’s eastern province of Chon Buri.
— Thai PBS News

Thai officials: US won’t tariff auto exports
Shipments of Thailand’s automobiles and auto parts are unlikely to face penalty tariffs by the US because the export values are deemed insignificant.
–Bangkok Post

PPRP to offer tie-up with ‘kingmakers’
The final piece of the coalition formation puzzle is expected to fall into place on Monday, with the Palang Pracharath Party (PPRP) expected to extend formal invitations to join its coalition to the Democrat and Bhumjaithai parties.
— Bangkok Post

Government issues tax measures to encourage reading among Thai people
A survey conducted by the National Statistical Office in 2018 has indicated that Thai citizens on average spend up to 66 minutes per day reading, a decline from 80 minutes a day in 2015. The government is therefore considering a tax measure to help encourage more people to buy books and embrace reading.
— NBT World (video)

Majority foresee more conflict after new govt in place: Suan Dusit Poll
A slight majority of people believe political conflict will continue after a new government is in place, according to an opinion survey by Suan Dusit Rajabhat University, or Suan Dusit Poll.
— Bangkok Post

Community is key if next Southeast Asian unicorn will be Thai
Thailand is the second largest economy in Southeast Asia. It boasts 70 million people, a gigantic tourism industry and a world famous cuisine.
— e27

Medical marijuana: Thailand leads the way
Thailand legalised the use of marijuana for medicinal and research purposes in December 2018, granting usage for patient treatment and research and industry activities only.
— The Asean Post

Commerce Ministry meets Japanese retailer to promote Thai products
The Minister of Commerce has invited delegates from a major shopping mall from Okinawa, Japan, for business meetings in Thailand to promote the sale of innovative farm products. It is expected that Japanese entrepreneurs will order at least one million baht worth of Thai goods following the initiative.
— NBT World (video)

Dream home becomes more elusive
Dreams of purchasing a second home or speculative investment in condo units have been stymied by tighter mortgage lending rules, with the consequences still being assessed.
— Bangkok Post

Laem Chabang Port fire leaves Sriracha choking on noxious smoke
An explosion aboard a docked cargo ship at Laem Chabang Pier injured 133 people and left a cloud of noxious formaldehyde gas hanging in the air. A Royal Thai Navy helicopter, tugboat and patrol boat were deployed to assist port firefighters in battling the Saturday morning blaze aboard the …
— Pattaya Mail

Prem’s birthplace in Songkhla draws mourners
Hundreds of people have gathered at Phathammarong Museum — the birthplace of Privy Council president and statesman Gen Prem Tinsulanonda, who died on Sunday morning — to pay homage to one of the architects of Thailand’s modern history, according to media reports.
— Bangkok Post

Operators see potential in tourism levy
Tourism operators have embraced the imminent tourism tax but vow to monitor the issue closely to ensure that levy collection will not have a negative impact on tourism.
— Bangkok Post

Call for foreign firm perks
The government is being advised to come up with more attractive investment perks to lure foreign companies ravaged by the ongoing trade row to relocate their production bases to Thailand.
— Bangkok Post

Najomtien sewer repairs to take month
Repairs to a neglected Najomtien sewage-pumping system will take a month with residents asked to be patient with the smell and pollution fouling a local beach.
— Pattaya Mail

Dusit Thani lines up B2.6bn expansion
Dusit Thani Plc plans to splurge at least 2.6 billion baht to expand its hotel and residential business over the next 1-2 years.
— Bangkok Post

Labour union in uproar over Exat’s bid to escape BEM lawsuits
The Expressway Authority of Thailand (Exat) labour union will ask the cabinet to delay its consideration of the Exat board’s decision to extend concessions to Bangkok Expressway and Metro Plc (BEM) for over 30 years.
— Bangkok Post

Phuket Opinion: Diving in
It has been a long time coming, but we’re finally heading in the right direction. Maya Bay has been closed since last year to allow the marine ecosystem there to recover from heavy damage caused by tourists ploughing through the bay year after year.
— The Phuket News

The man tasked with guarding the King
When a new police division was formed on Oct 1 last year to specifically provide security for His Majesty the King and members of the royal family, the name of Crime Suppression Division (CSD) deputy commander…
— Bangkok Post

Watch out Thailand, here comes Vietnam
“Vietnam is poised to take advantage of the next wave of digital technologies such as blockchain, AI (artificial intelligence), internet of things and cloud-based services to become Asia’s next high-performing economy and improve the living standards of its residents.”
— The Thaiger

Marine Rangers: DMCR calls for volunteers to help protect marine treasures
The Department of Marine and Coastal Resources (DMCR) is calling for people – Thai or foreign – to volunteer as “Marine Rangers” in order to protect coral reefs and other coastal areas, including mangroves, from damage by irresponsible tour operators or other unscrupulous parties.
— The Phuket News

HM the King donates 1.2 tons of pet food to Phuket shelter
His Majesty King Maha Vajiralongkorn on Thursday (May 23) donated a large amount of pet food and supplies to Phuket Stray Dog Shelter in Thalang.
— The Phuket News

All Thai Taxi freezes plan to expand fleet
All Thai Taxi Co has suspended a plan to add more taxis to its fleet after a struggle to recruit drivers and performance that has fallen short of targets.
— Bangkok Post

Naked foreign arrested in South Pattaya
An unidentified foreign man has been arrested for strolling naked through a South Pattaya neighborhood. No name, age, description or nationality was given for the man, who was turned in by locals who saw him walking on Soi Khopai 4/1 May 23. He obviously was carrying no identification.
— Pattaya Mail

Thailand’s hero of the day: Phitsanulok big-biker ‘Tik’
Kudos to Mr Big Bike, as he’s been nicknamed, the hero of the moment, who took matters into hand to help a family needing urgent help and was stuck in traffic in Phitsanulok in northern Thailand.
— The Thaiger

Siam Health adds 90% of P&F
Siam Health Co, the maker of Smooth E skincare and Dentiste toothpaste, has acquired a 90% stake in P&F Integrate Co, the operator of P&F drugstores, for 200 million baht in a move to diversify the business.
— Bangkok Post